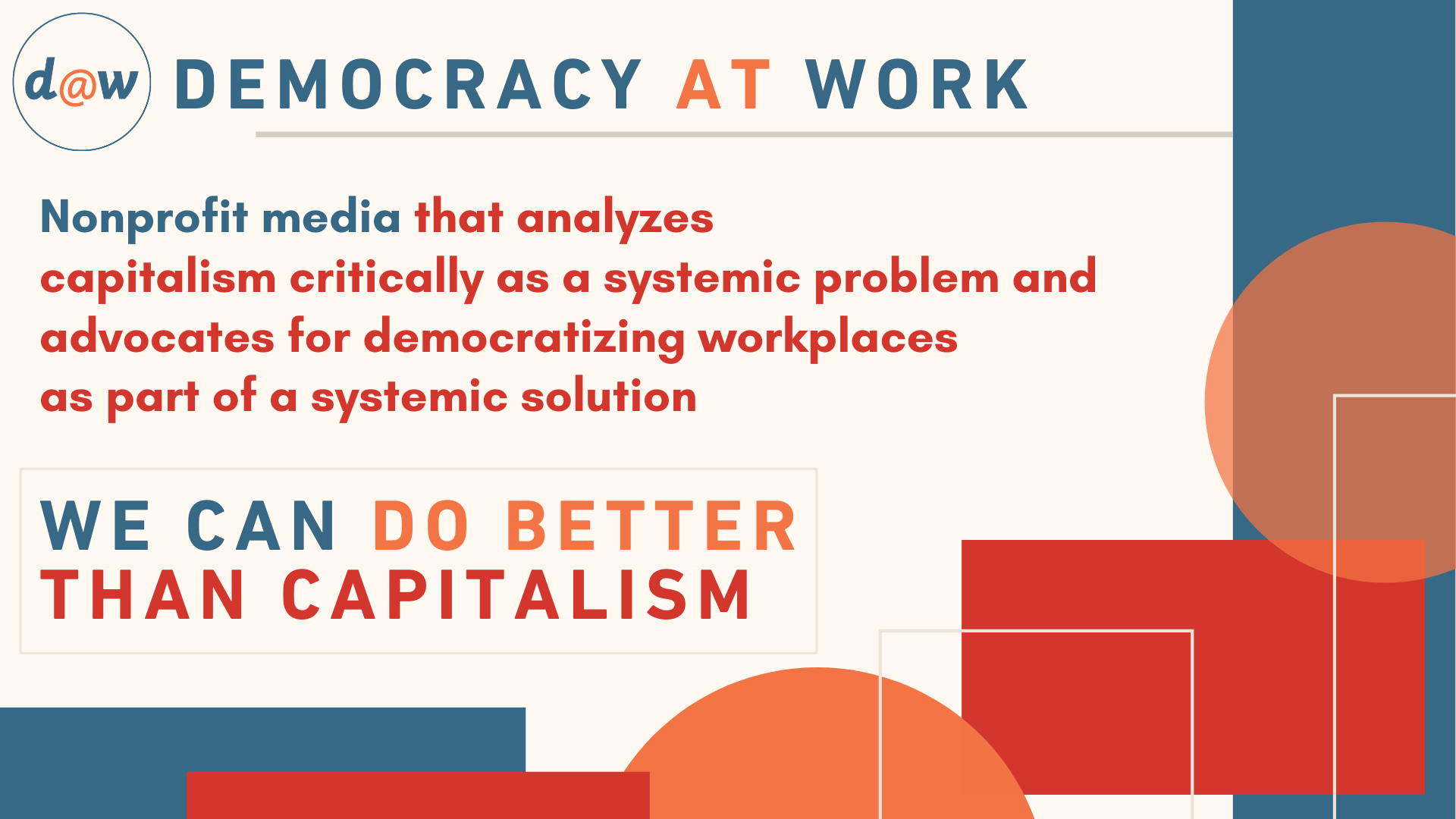 Nonprofit media that analyzes capitalism critically as a systemic problem and advocates for democratizing workplaces as part of a systemic solution.

We can do better than capitalism.

"Democracy at work is a vital force for change for the better, it strips away the veneer that provides cover for the abuses we see all around us - long may it continue."
- Adrian D, Fan of [email protected] for 2 years 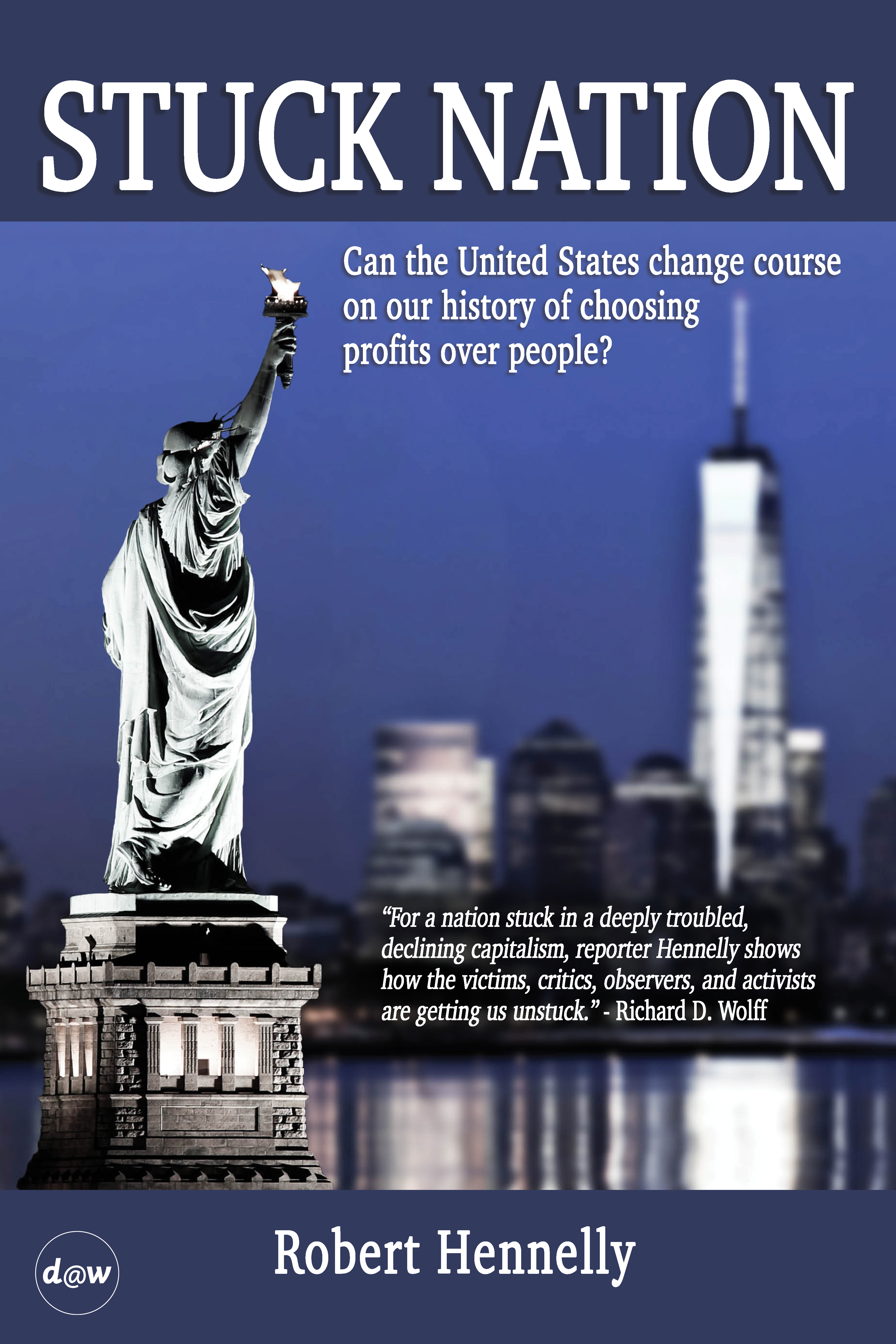 Stuck Nation is the work of award-winning print and broadcast journalist Robert "Bob" Hennelly. Its depth reflects his many decades of on-the-ground reporting, from the streets to historical archives and the White House. Stuck Nation lifts up the stories of those whom our capitalist system would otherwise see ‘disappeared’. It bears the human cost of our system and our silence. It holds accounts of individuals and a broader movement willing to put everything at risk to change our national narrative. Through it all, Hennelly shares his observations on the origins of our national stuck-ness, his reporting on how it endures, and his analysis of what might be required for us to change the course of our historical patterns, so that America can begin putting the wellbeing of its people ahead of its profits.


“Hennelly brilliantly analyzes our capitalist crises and how individuals cope with them, tragically but often heroically. He helps us draw inspiration and realistic hope from how courageous Americans are facing and fixing a stuck nation.”
Richard D. Wolff

Economic Update with Richard D. Wolff is a weekly, nationally syndicated show that empowers listeners with information to analyze not only their own economic situation, but also the economy at large. Since its beginning in 2011, it has been hosted by [email protected] founder and board member Richard D, Wolff, who excels at taking complex economic issues and making them understandable.

"A lifeline of truth and a beacon of clarity during a time of desperate economic turbulence."
- Curt C., Listener of Economic Update for 8 years

David Harvey's Anti-Capitalist Chronicles is a bi-weekly podcast that looks at capitalism through a Marxist lens. Host David Harvey is the foremost Marxist thinker about political economy and has been teaching Karl Marx's Capital for over 40 years.

All Things Co-op is a bi-weekly podcast that explores everything co-op. From theoretical and philosophical conversations about political economy and the relations of production, to on-the-ground interviews with cooperative workers, All Things Co-op aims to appeal to a wide audience of activists, organizers, workers, and students to be better educated and motivated to create a new cooperative society.

Capitalism Hits Home with Dr. Harriet Fraad is a bi-weekly podcast that explores what is happening in the economic realm and its impact on our individual and social psychology.

Cities After... is hosted by Miguel Robles-Durán and is a bi-monthly podcast about the future of cities; grounded in our daily urban struggles, it is part dystopian and part utopian. The intention is to entice civic imagination into action, because a more just and sustainable urban future is possible.

Stuck Nation: Can the United States Change Course on Our History of Choosing Profits Over People? (2021) is the work of award-winning print and broadcast journalist Robert "Bob" Hennelly. Its depth reflects his many decades of on-the-ground reporting, from the streets to historical archives and the White House. Stuck Nation lifts up the stories of those whom our capitalist system would otherwise see ‘disappeared’. It bears the human cost of our system and our silence. It holds accounts of individuals and a broader movement willing to put everything at risk to change our national narrative.

In this unique collection of over 50 essays, The Sickness is the System: When Capitalism Fails to Save Us from Pandemics or Itself (2020), Richard D. Wolff argues clearly that "returning to normal" no longer responds adequately to the accumulated problems of US capitalism. What is necessary, instead, is transition toward a new economic system that works for all of us.

Learn more about The Sickness is the System

Understanding Socialism by Richard D. Wolff (2019) tackles the taboos and unveils the often hidden histories of socialism, but most importantly it offers a way forward: a socialism built on democracy in the workplace. A blend of history, analysis and opinion, Understanding Socialism is an honest and approachable text that knocks down false narratives, confronts failures, and offers a path to a new socialism based on workplace democracy.

Understanding Marxism by Richard D. Wolff (2018). Americans especially now confront serious questions and evidences that our capitalist system is in trouble. It clearly serves the 1% far, far better than what is is doing to the vast mass of people. Marx was a social critic for whom capitalism was not the end of human history. It was just the latest phase and badly needed the transition to something better. We offer this essay now because of the power and usefulness today of Marx’s criticism of the capitalist economic system.

Check out our calendar for notice of other special [email protected] events.

For teachers and life-long learners alike, we offer recommended reading lists, discussion questions, translations and episode transcripts in our growing assemblage of resources.

Take a look at what is available in our Resources page.

Take a look at the latest organizational updates and news from Democracy at Work on our Blog.

As a non-profit 501c3, we rely on your support, whether by donating, getting involved, or sharing our work with your friends and family. Thank you for your part in advocating for a stronger, fuller democracy. 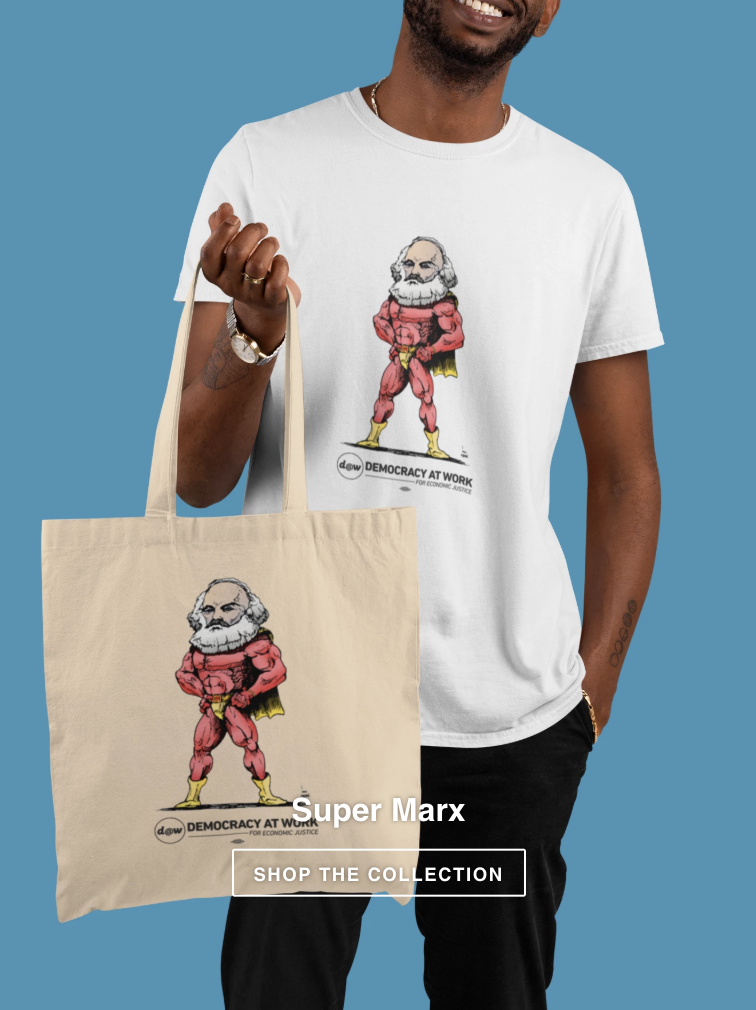 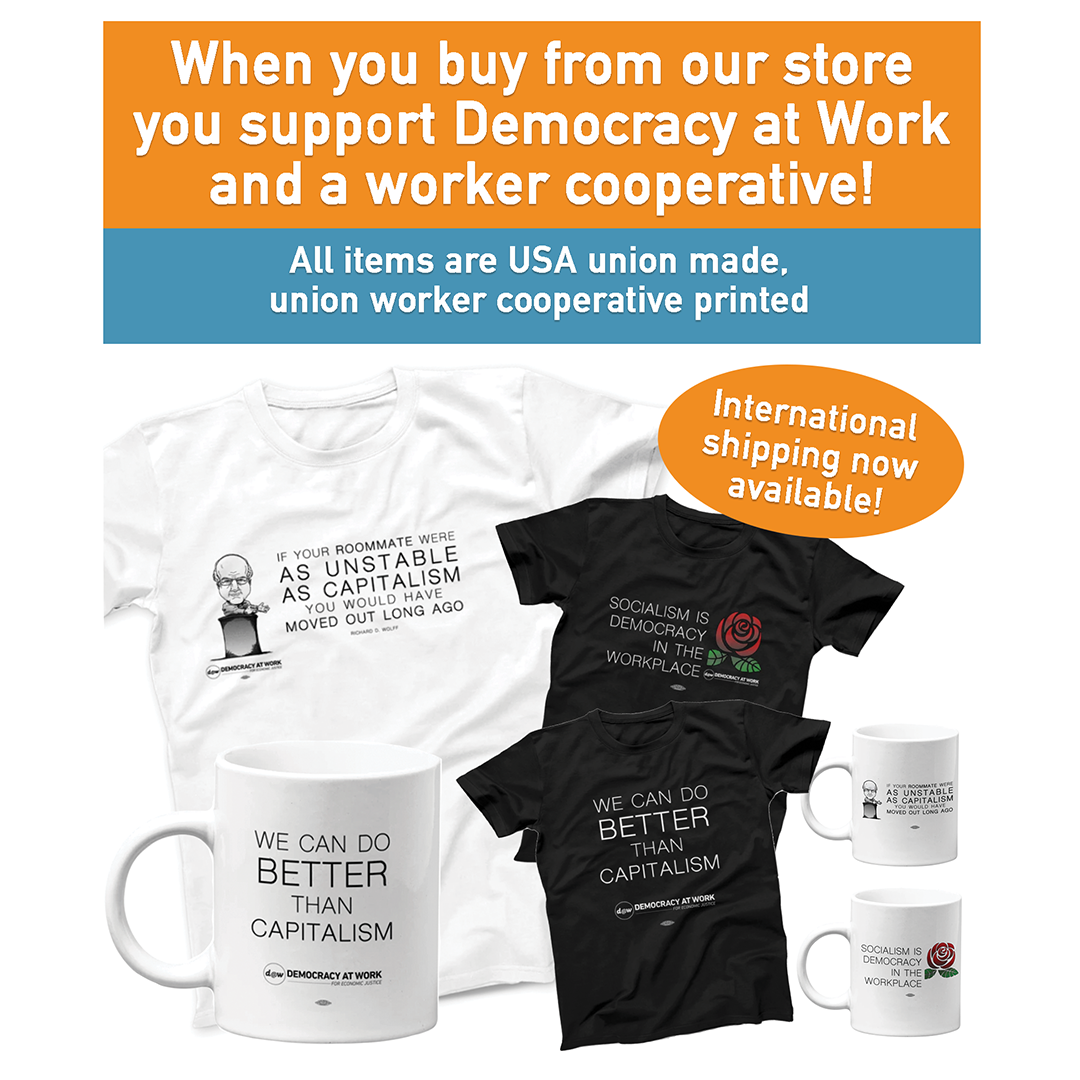 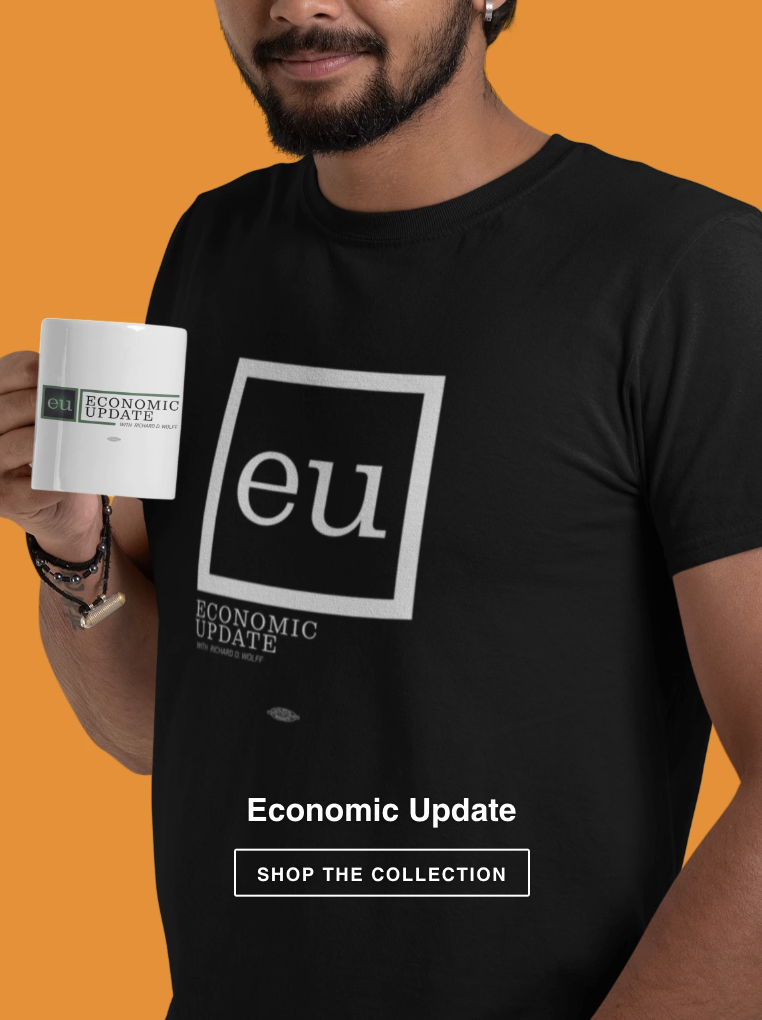 When you buy from our store, you support both
Democracy at work and a worker cooperative!

All items are USA union made and union worker cooperative printed.