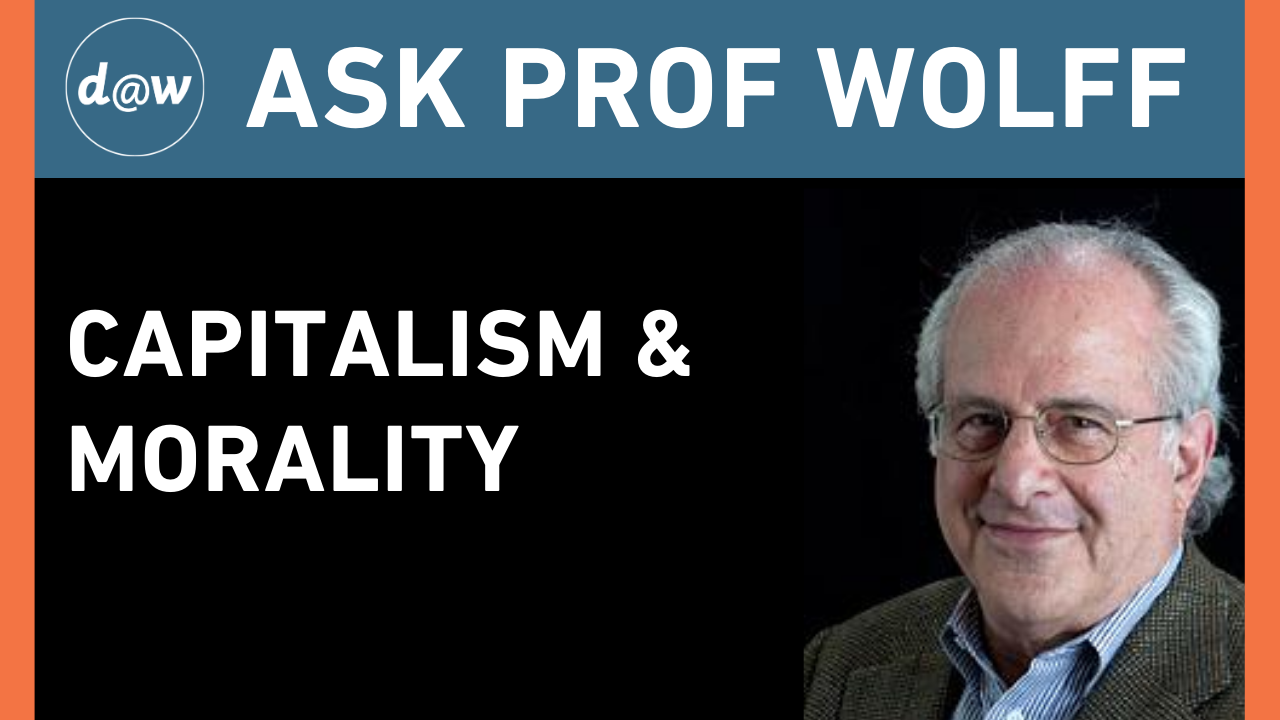 AskProfWolff: How to Motivate Workers
Watch on YouTube
A patron of Economic Update asks: "Hello, Professor Wolff! I'm from Moscow, Russia. We love you a lot! My question comes as a reaction to the answer Peter Schiff gave you five years ago during a telephone call when you said how amazing cooperatives are, he answered that most people just want to work 9 to 5 and rest home with a bottle of beer. How do you motivate people to be their own directors?"

AskProfWolff: Capitalism & Morality
Watch on YouTube
A patron of Economic Update asks: "Milton Friedman said it was foolish to expect a legal fiction such as a corporation to have a moral sense. The moral sense, he said, was resident in the people operating the corporations. Why is the trouble with capitalism systemic and not simply an indictment of the people who feel compelled to seek all power and profit through it? Why can't capitalism work with completely honest and moral people? There surely are decent, honest and moral people in sufficient numbers to operate the economy. What prohibits this from happening?"

AskProfWolff: "Zombie" Corporations
Watch on YouTube
Prof. Wolff responds to 2 question from Patrons of Economic Update: "Can u list the 20 Zombie Corporations now owned by Federal Reserve the big Private bank w/ 12 branches around the USA?" and "What's the order of events that leads to this sustaining/zombification process to collapse? What should we look for to see this happening?" 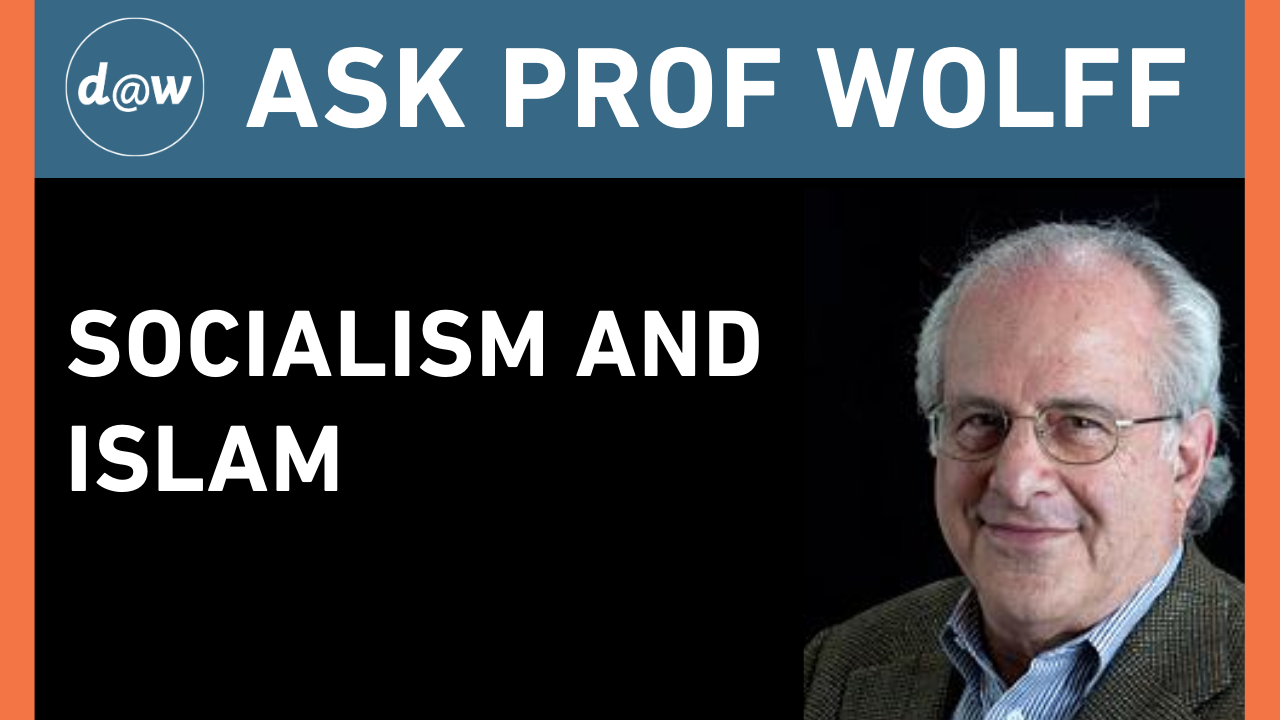 AskProfWolff: Socialism and Islam
Watch on YouTube
A patron asks: Hi Professor Wolff. My question is on the theoretical intersection of Islamic economics and Socialist economics. Due to the prohibition on interest and the strong distaste on accumulation of private capital, Islamic thinkers have always been concerned about inequality. I wanted to ask if Professor Wolff is familiar with some of the models within Islamic economics (wages as pre-modern wealth redistribution, Musharaka as joint housing and business owning vehicles without interest, Zakat as mandatory wealth tax for infrastructure development, etc.) If he is aware, or interested, where are the common points? Where are the points of departure? And more importantly, is there a genesis for potential synthesis within socialist economies that meld with Islamic frameworks that would be very exciting?"

AskProfWolff: Why Unions & Worker Co-ops Should Ally
Watch on YouTube
A patron asks: "In light of the worker coops started by organized labor during the Seattle Strike of 1919, do you think labor unions today should use their union dues to create a worker-controlled economy that competes with global state capitalism rather than give it to the Democratic Party for the sake of influence? If labor unions owned their own grocery stores, apartment buildings, and hospitals and sold their food, housing, and medical care at cost to their union members, wouldn't everyone join labor unions, spend their money in the worker-controlled economy, and thus financially starve global state capitalism? If so, should we not encourage the rank and file of labor unions to pressure their union leadership to create such a worker-controlled economy in order to provide the masses a democratic socialist alternative to global state capitalism?" 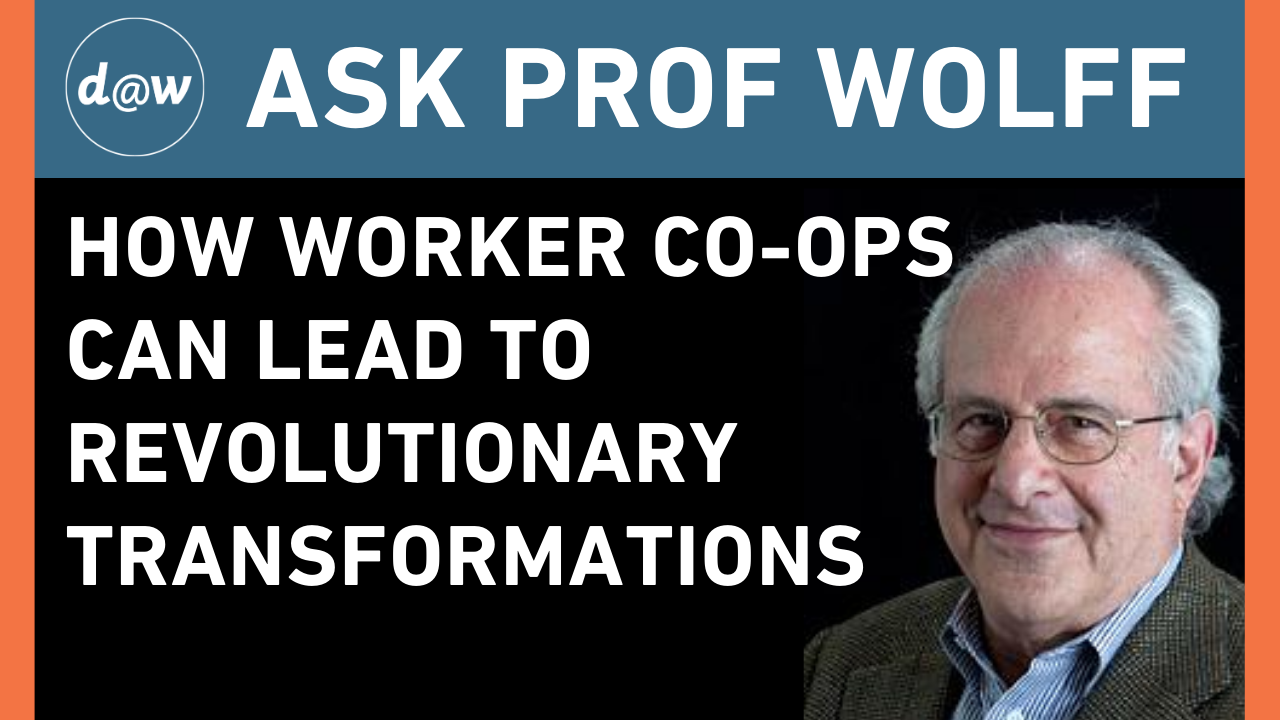 AskProfWolff: How Worker Co-ops Can Lead to Revolutionary Transformations
Watch on YouTube
A patron asks: "I would like to pose a question for @AskProfWolff. How can we organize diffused worker self-directed enterprises into explicitly supportive associations that can stand as alternative organs of power against global corporate capitalism? Further, how can we connect these mutual association with broad-based progressive social movements to product permanent revolutionary transformations in society?"

AskProfWolff: Socialism in Venezuela
Watch on YouTube
A patron asks: "I recently encountered a video on the internet with Dr. Cornel West discussing the ideas of socialism with Tucker Carlson on Fox News. What I found most interesting was how Tucker immediately went to the Venezuela argument to “prove” socialism doesn’t work. What I didn’t understand is why Dr. West more or less accepted that argument by failing to cite all of the European countries who embrace socialism when asked by Carlson to cite examples of where socialism works. My question to you is why aren’t we, leftists, actively citing the European states that embrace socialism as proof that it works? My understanding is that the Scandinavian countries, France and others all have active socialist parties and adopt many socialist programs. Would you say that is accurate and if so could you provide a list of countries that do qualify as socialist? "

A patron asks: "I wonder if there is any good evidence that the stagnation of worker incomes starting in the 1970's was at least one of the causes of large banks looking for ways to make money via credit default swaps and many other very risky means. My perhaps far too simplistic idea is that with the middle class losing their ability to consume as much as they had in the decades before the 1970's, large banks started looking for different ways to increase their profits other than lending/investing in businesses that created products or services for middle class consumers. And at the same time in the 1970's, our currency became a completely fiat currency, allowing the Federal Reserve to eventually provide lots of money to big corporations and banks to cover any losses from their stupidly planned investments. I realize that the really big banks would probably have come up with all their complicated and very risky ways of making money even without the decline in purchasing power of the middle class. But is there any evidence that this declining purchasing power fueled the big banks search for riskier ways to make profits, and at the same time fueled the Federal Reserve’s ridiculous program of aiming for a certain percentage of inflation each year, which has really hurt middle class purchasing power?"

A patron asks: "What is a good way to strengthen the community element when we are moving into different homes and jobs every few years? We know how important community is, but can't seem to stay in one place long enough to build a network."

AskProfWolff: How the Fed Serves
Watch on YouTube
A patron asks: "Can you talk about the FED? How it responded to the pandemic and what we can do about it going forward. One thing I see going under reported is how it was working before the pandemic. Printing money is ridiculous and allows people to decide the winners. I believe the FED is part of all our problems."

AskProfWolff: Markets and Private Property in a Socialist Society
Watch on YouTube
A patron asks: "Do markets exist in a socialist society? The market system under capitalism has failed to meet the needs of its citizens, especially in certain areas where the incentives of a market system do not yield appropriate social outcomes - like health insurance. But in many situations, free and fair markets are an efficient and effective way of distributing resources. Does private property exist in a socialist society?"
Do you like this page?