A Closer Look At Cooperative Structures: a Q&A with Prof. Thomas Lambert 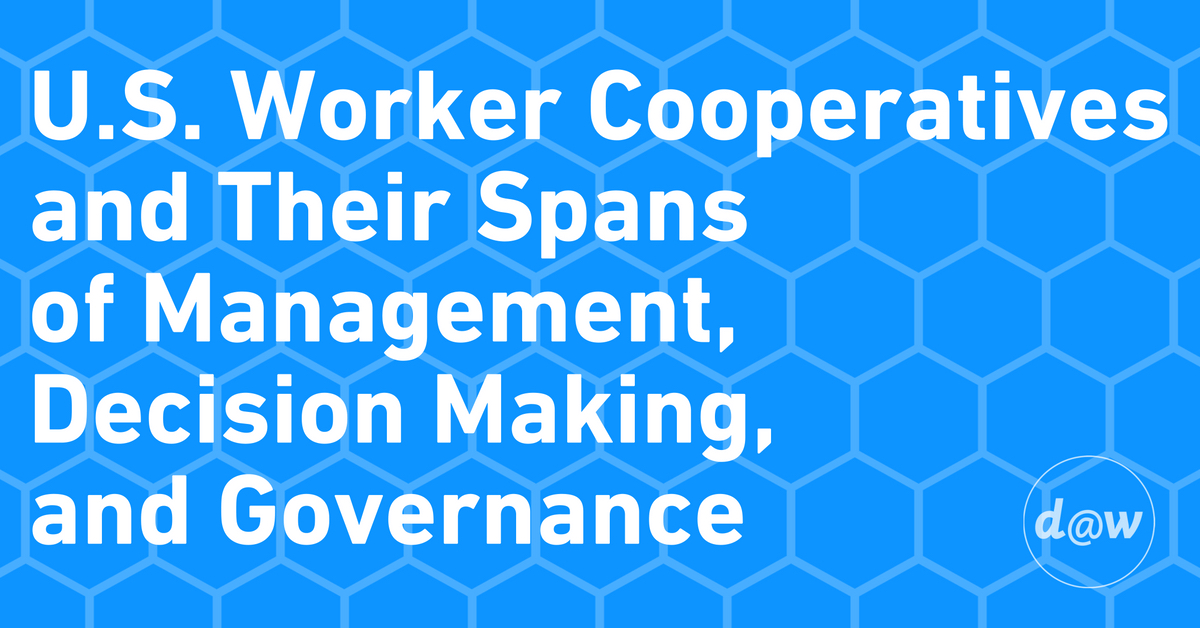 Part of the goal of Coop Talk is to explore the latest in academic research focusing on worker-owned cooperatives as a way of shedding light on the dynamics of democratic workplaces and practices.

One of Coop Talk's contributing editors, Karina Stenquist, recently interviewed Professor Thomas Lambert about his research on U.S. worker cooperatives and various aspects of their decision-making structures. Lambert is the Chair of Business Programs and Simmons College of Kentucky and Associate Faculty in the Department of Economics and the University of Louisville. His research, which surveyed about 50 co-ops across the country (there are an estimated 200 to 300 worker-owned cooperatives in the United States) sheds light on some of the underexamined aspects of co-op structures, such as the ratio of managers to workers, and the criteria considered in making investment decisions.

His full study, U.S. Worker Cooperatives and Their Spans of Management, Decision Making, and Governance: An Exploratory Analysis, can be found here.

The interview below has been edited lightly for clarity.

Karina Stenquist for [email protected]'s Coop Talk: How did you become interested in studying worker cooperatives and what were you hoping to learn with this particular survey?

What got the ball rolling were email exchanges with Dr. Wolff [in which] he mentioned certain topics that hadn't been touched on - there seemed to be gaps in the literature. Which is how I decided to do this survey: [in order to find out] do they have boards of directors? Is there a management structure to any of them? These are the questions I was interested in.

There's a lot out there that talks about worker cooperatives as having high degrees of morale compared to most other organizations or higher productivity, but not a whole lot out there as far as decision making, and details of decision making. Do these worker-owned cooperatives have managers? Is it in proportion to the numbers of managers in most other organizations?

Actually, the average [in my results] wasn't a true picture, it was more like the mode - the most frequently occurring number - which turned out to be zero [managers]. The managers often seemed to be more like coordinators, they don't have bosses in the traditional sense. And most didn't have boards of directors, which makes sense since most are small.

What is the most important takeaway, in your opinion, from your examination of this survey of co-ops - or the thing that most stood out to you, surprised you?

There seems to be more of an emphasis -- unlike traditional corporations, where [leaders say] "Ok, we're going to make an investment and as long as it brings in more money for profit, no matter how many jobs are lost, we'll move in that direction." But with co-ops it's different, they'll make an investment to make more money but they'll make a decision to save jobs as well. Which is unusual, as you know, because usually they just give people pink slips when things go wrong in these huge organizations.

You write a lot about span of management - a term that may not be familiar to a lay reader - can you explain that concept and why it's important in thinking about worker coops?

Some people call it the "intensity of supervision" and it refers to the number of managers you have per employees in an organization. Does the typical manager supervise 10, or 20 or 30 people? In the literature some people suggest the reason we have managers -  and this is the negative view - is not only to supervise but to prod people to get the job done which might indicate a certain level of mistrust in the employees.

I don't entirely agree with that [description of a manager's purpose] but it does happen that managers are told to watch the clock, make sure people are punching in on time  - but in worker co-ops maybe, we don't need that kind of supervision.

And what were your findings about span of management?

That, at the most, there was 1 [manager in the organization]. The norm was zero [managers] - for almost half of respondents. The data was a little skewed because one cooperative had 2,000 employees: a home health worker co-op in California. The median, in the middle, was 1 [manager], but when you look at how many responded with zero, the true norm was zero.

In the introduction to your study, you mention the lack of coops in the United States, which is one of the reasons some people might be skeptical about co-ops as a viable organizational model. Any insight as to why worker co-ops are so underrepresented in the US as opposed to other countries?

My first thought is that we typically don't do enough to enable worker cooperatives like in other countries. In Italy and other European countries, rather than take unemployment benefits, laid off workers can decide to take a lump sum from the government and buy the business if it's going out of business or they can go in with a group of other people to start a business. Here it's not presented as an alternative to unemployment.

In some countries, if a business closed down and they don't pay the property taxes on the business or the business owes money then the the nation - the government - will take over and then sell it to the workers. We really don't have that type of mechanism here. One source I read spoke of using eminent domain, but I don't think that's really been tried here.

With the results you received from this survey, were there any new questions that were raised for you? What results would you like to dig in deeper about?

One day I'd like to go back and find the other ways in which the worker cooperatives are interacting with their communities. If not that many of them have boards of directors, and even smaller numbers have community members participate on boards, then what other ways do they get input from community and community support? Are they attending community events or what other organizations are they participating in to make their presence and awareness of cooperative organizations greater among the community. Community support is probably important in developing a customer base, and promoting the concept of worker cooperatives. It's kind of a vicious circle - we don't have that many worker cooperatives here in the US but we'll not get the word out as long as the numbers are so low.

Would you have any suggestions for people interested in reading more about worker-owned cooperatives?

TL: Dr Wolff's book, Democracy At Work, would be a good one. Then there's a guest [Wolff] had on his radio show, Peter Ranis, who wrote Cooperatives Confront Capitalism. He brings up this whole idea of using eminent domain, where when a business abandons a site then local or state government comes along and says, "If you're not using this but not paying taxes we're going to turn around and sell it to former employees", with former owners getting some payment for the property. I think this is something a community could give a try with their local authorities. Particularly if the business that's left behind has wreaked havoc, there's a precedent for that if it's in the best interest of the community.