Certainly We Can Do Better Than Capitalism 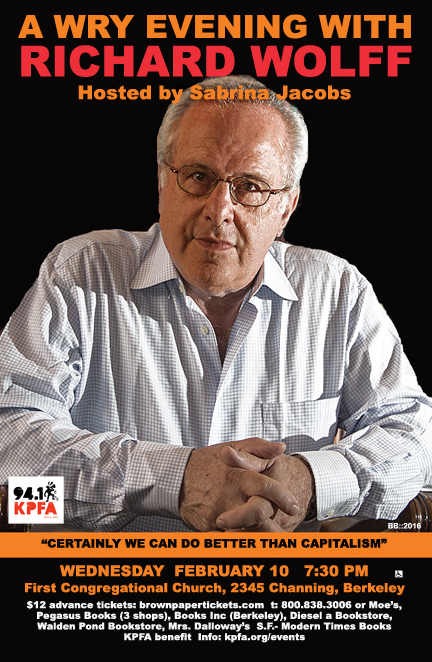 Richard Wolff, an American Marxist economist, well known for his work in economic methodology and class analysis, has rapidly become famous as well for his Pacifica Network Radio program, Economic Update, heard weekly in New York and the S.F. Bay Area. This has led to his frequent public lectures drawing sold-out audiences coast to coast.

The U.S. is sinking ever deeper into hard times for the vast majority of its population. More economic downturns are coming. Capitalism’s instability, inequalities, and failures to meet our needs are provoking rising opposition. Considering the increasing problems of drought, poverty, debts, job conditions, and a worsening environment,  the American dream is now entirely out of reach. Our political leaders are controlled by corporate giants and lobbies that defy anything like democracy. The time is now for real and substantial change. Richard Wolff has positive suggestions.

Professor of Economics Emeritus at the University of Massachusetts, Wolff is currently a Visiting Professor in the Graduate Program in International Affairs at the New School in New York City. He also teaches classes regularly at the Brecht Forum in Manhattan. Earlier he taught economics at Yale University, at CCNY, and at the University of Paris in France.

In 1988 Wolff co-founded the journal Rethinking Marxism. Later he published Capitalism Hits the Fan: The Global Economic Meltdown and What To Do About It, This was followed by Occupy the Economy: Challenging Capitalism (with David Barsamian), Contending Economic Theories: Neoclassical, Keynesian and Marxian(with Stephen Resnick), and Democracy at Work. He is featured regularly in television, print, and internet media. The New York Times Magazine has named him “America’s most prominent Marxist economist.”

Sabrina Jacobs is the volunteer host and producer of A Rude Awakening, a cultural and political affairs show aired on KPFA. Prior to her own show, she got her start as an intern six years ago and moved on to news reporting. KPFA benefit.