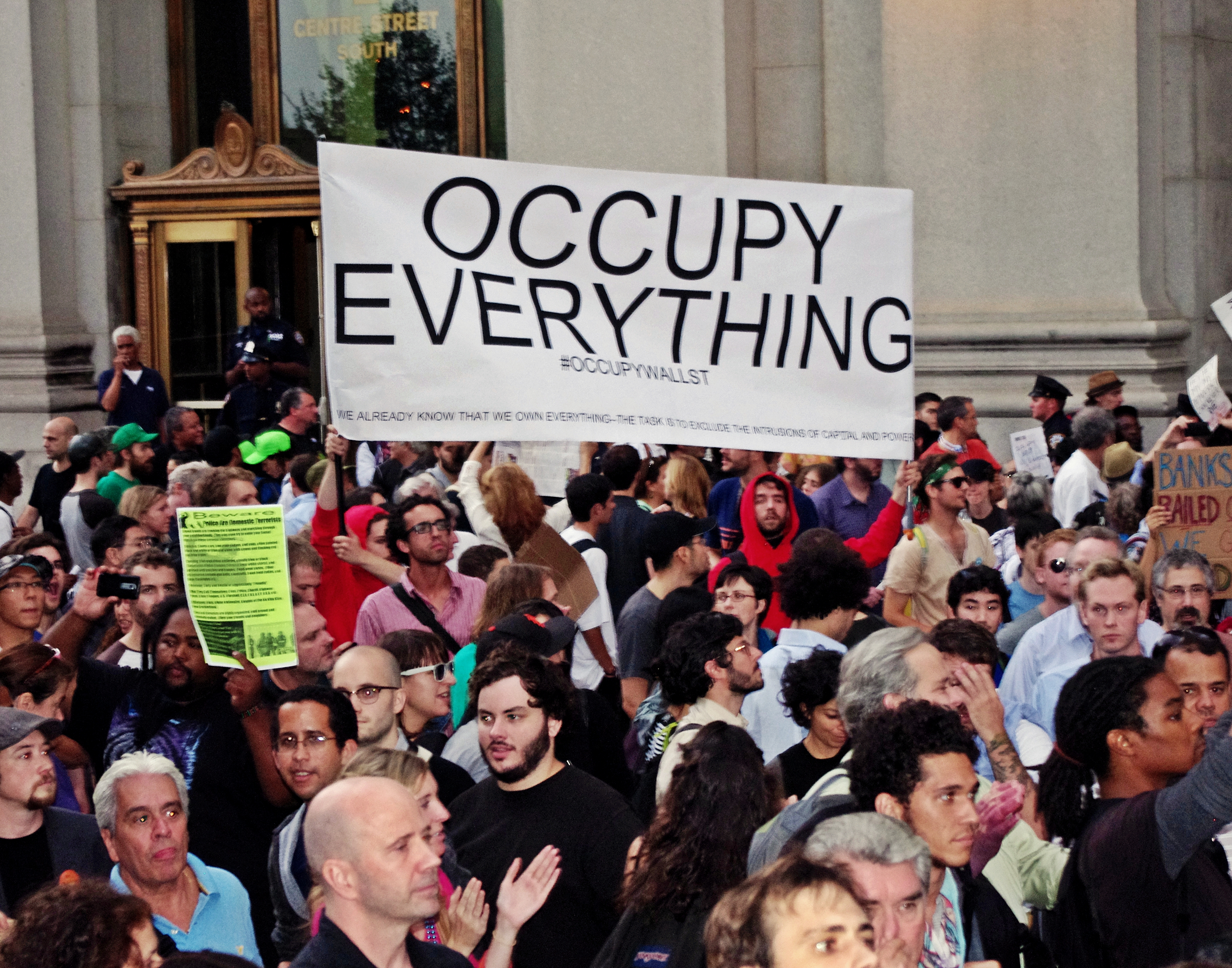 The winds of change are blowing harder. The crisis since 2007 has renewed criticism of capitalism, but pressure for change has built far longer than that. So it is time to draw some lessons from the major social changes of the past and apply them now. One of the most important lessons concerns class. How activists see and act on today's class system can make social movements more effective now than in the past - as a brief historical review can show.

The overcoming of slavery, in the US Civil War, but also at other times and places across the globe, was a revolutionary change always accompanied by passionate promises. Most of emancipation's supporters spoke of human freedom, liberation, progress and social harmony if slavery were abolished. Opponents claimed that ex-slaves would be less protected and worse off than had they continued as slaves. Masters and slaves saw the world, their class structure and the future differently.

Overcoming feudalism, at the end of medieval Europe, but also in other times and places across the globe, was likewise celebrated and condemned. For one side, freeing serfs from their feudal ties to the land would bring a new dawn of human freedom. "Liberty, equality and fraternity" were core goals, not merely slogans, of Paris' 1789 revolutionaries. On the other side, skeptics warned that feudalism's end would plunge society into brutish chaos that the world would regret. Landlords and serfs viewed their class structure and a post-feudal world differently.

In the 20th century, most socialists before and after the revolutions in Russia, China and beyond passionately affirmed their project as aimed at nothing less than emancipating capitalism's working-class majorities. Critics countered that workers were or would be worse off economically and politically once socialism displaced capitalism. Socialism's advocates and those who preferred capitalism viewed class and the world in fundamentally different ways.

Notwithstanding their actual achievements, the revolutions against slavery, feudalism and capitalism have never yet reached the freedoms, equalities and social harmonies that so many had enthusiastically promised and sought. Critics and skeptics then and to this day point to that failure to insist that those revolutions' greatest goals were unattainable utopias. Others have blamed the revolutions' failures, distortions etc., on leaders (Napoleon, US politicians after 1865, Stalin, Mao etc.) or abstractions such as "insufficient democracy" and so on. Such lessons drawn from past revolutions contribute to hesitation and ambivalence now about revolutionary change. Meanwhile, capitalism's social and ecological costs grow more intolerable. People increasingly appreciate that capitalism is a key systemic problem of and for our time, but they see no revolutionary solution that can overcome the limits and avoid the failures of past revolutions.

Yet another and very different lesson can be drawn. That is the point to be made here.

Overcoming slavery ended that system's injustices on many levels. It increased human freedom in significant ways. Yet, it also enabled the reorganization of ex-slaves and ex-masters into other relations of continuing un-freedom. In some places and times, slavery gave way to feudalism; serfs and lords replaced slaves and masters. In other places and times, slavery gave way to capitalism; employers and employees took the places of masters and slaves.

Abolishing feudalism likewise ended many of its systemic injustices to move society forward in terms of human freedoms. However, when capitalism emerged from feudalism's dissolution, as in post-17th century Europe, the landlord-serf structure transformed into the employer-employee structure. The novels of Balzac, Zola, Gorky and Dickens, among others, much like the social criticism of Marx, express deep disappointment about the gap between what they hoped for from the end of feudalism and what early capitalism actually delivered.

When "actually existing socialisms" replaced the systems in pre-1917 Russia, pre-1949 China, and so on, outcomes were again mixed. Workers did acquire far greater job security and unprecedented levels of educational, medical, housing and other social services. Yet they remained un-free in subordinated positions within and alienated from socialist institutions - workplaces, schools, politics and the state. Those conditions facilitated the eventual implosions of Eastern European socialist societies in the 1980s and the remarkable changes since then inside the People's Republic of China.

The key question: Why did social movements against slavery, feudalism and capitalism that eventually toppled those systems prove unable to achieve their most revolutionary goals? One answer concerns a certain blindness that gripped the revolutionaries. In each case, they saw parts of the problem and devised successful strategies to solve them. They overcame those parts of slavery, feudalism and capitalism that they identified as intolerable affronts to their notions of human progress and freedom. Yet they missed and so left intact another part of all of those systems. Thereby they inadvertently blocked their revolutions' progress, frustrated their deepest aspirations and provided support for the persistent criticisms by revolutions' enemies.

If we recognize and examine the revolutionaries' shared blindness - their neither seeing nor using a particular class perspective - then contemporary social movements need not repeat that blindness nor suffer its consequences once again. If they equip themselves with the missing class perspective and its insights, movements for basic social change can go further than their predecessors in realizing the project for genuine human liberation.

Those predecessors were mostly blind to one particular notion of class that defined it as the economic process of producing a social surplus. The concepts used by past revolutionaries instead defined class otherwise in terms of the unequal social distributions of wealth (rich versus poor) and/or power (rulers versus ruled). Their revolutionary effort to equalize wealth and democratize power left in place another kind of inequality located in the core structure of production. That was and is the inequality separating those who produce a surplus in society from those who take and live on a surplus they did not help to produce.

For this different surplus concept of class, the definition focuses precisely on production, on who produces and who gets the surplus. That surplus is defined as the excess of total output over that portion of it that sustains the output's direct producers (at whatever level of consumption social history has yielded them).

The production of a surplus is a class process because it immediately defines two positions within a relationship: the direct producers and the first receivers of that surplus. When the direct producers are different persons from the first recipients, that differentiation entails a set of social consequences (political and cultural as well as economic) that includes contradictions, tensions and conflicts. Marx, who first articulated this particular surplus-focused concept of class, used the term "exploitation" to identify all those class processes in which direct producers are different persons from the first recipients of surpluses. Those recipients of the surplus exploit its direct producers: They obtain a portion of the total product, which they did not directly participate in producing. Moreover, the exploiters use and distribute that surplus to maintain their privileged economic, political and cultural positions in society.

A class-qua-surplus perspective was absent or marginal in all those revolutions. The prevailing revolutionary mentality thus lacked the following particular understanding: Liberty, equality, fraternity, democracy and revolutionaries' other basic social goals require the end of exploitation in all its forms. That end is a necessary (although not sufficient) condition.

Ending exploitation means transforming workplaces such that direct producers of surpluses become likewise the first recipients of those surpluses. Democratically run cooperatives replace the hierarchical systems that had previously sustained exploitation in workplaces. In other words, workers' self-directed enterprises (WSDEs) take the places of slave, feudal or capitalist (private or state) enterprises.

Conditions of production that exclude exploitation will thereby undermine the parallel oppressions and inequalities in politics and culture. Understanding class in surplus terms, and that exploitation has multiple forms, future revolutions against slave, feudal and capitalist (private and state) systems will be more likely to realize their deepest goals. That is because they will no longer accept being deflected into constructions of merely different forms of exploitation rather than refusing exploitation in all its forms.

For 2015, having this class perspective would mean that social movements for liberty, equality, fraternity, democracy and so on would necessarily include commitments to end all exploitative organizations of work. That would make struggles in 2015 for those goals different from earlier struggles. We will have learned the lessons of those struggles. Those include respect for what previous revolutionaries did achieve in ending deeply entrenched and powerfully defended social institutions like slavery, feudalism and private and state capitalisms. But they also include recognition of their failures (1) to identify all these as forms of exploitative class processes and (2) to admit that the resulting revolutions ended one form but erected another.

What is possible now is a new class perspective that defines revolution in 2015 as clearly and explicitly targeted to end exploitation in any form. Central to such a revolution then is the demand to transform workplaces into genuine cooperatives where the workers (direct producers) function also and collectively as their own directors (first surplus recipients). In that way, the workers would make the basic workplace decisions: what, how and where to produce, and what to do with the surpluses. Workers who become their own bosses in this collective, democratic and cooperative way will enjoy the personal growth and social power it conveys. They will not easily (or ever) accept again the subordinations of exploitation in production and oppression in hierarchical, undemocratic political and cultural structures.

Note: A fuller exposition of the concepts of class as process, of surplus, and of exploitation are available in S. Resnick and R. Wolff, Knowledge and Class: A Marxian Critique of Political Economy (1987), New Departures in Marxian Theory(2006), and Contending Economic Theories: Neoclassical, Keynesian and Marxian(2012).