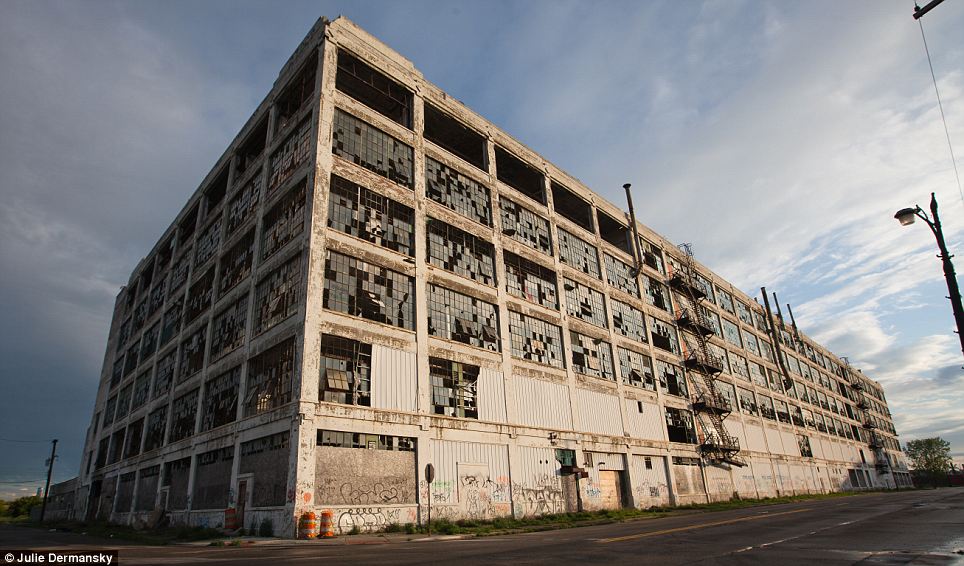 A Catalan translation of this article is available at Espai Fàbrica.

Capitalism as a system ought to be judged by its failures as well as its successes.

The automobile-driven economic growth of the 1950s and 1960s made Detroit a globally recognized symbol of successful capitalist renewal after the great depression and the war (1929-1945). High-wage auto industry jobs with real security and exemplary benefits were said to prove capitalism's ability to generate and sustain a large "middle class", one that could include African Americans, too. Auto-industry jobs became inspirations and models for what workers across America might seek and acquire – those middle-class components of a modern "American Dream".

True, quality jobs in Detroit were forced from the automobile capitalists by long and hard union struggles, especially across the 1930s. Once defeated in those struggles, auto capitalists quickly arranged to rewrite the history so that good wages and working conditions became something they "gave" to their workers. In any case, Detroit became a vibrant, world-class city in the 1950s and 1960s; its distinctive culture and sound shaped the world's music much as its cars shaped the world's industries.

Over the past 40 years, capitalism turned that success into the abject failure culminating now in the largest municipal bankruptcy in US history.

The key decision-makers – major shareholders in General Motors, Ford, Chrysler, etc, and the boards of directors they selected – made many disastrous decisions. They failed in competition with European and Japanese automobile capitalists and so lost market share to them. They responded too slowly and inadequately to the need to develop new fuel-saving technologies. And, perhaps most tellingly, they responded to their own failures by deciding to move production out of Detroit so they could pay other workers lower wages.

The automobile companies' competitive failures, and then their moves, had two key economic consequences. First, they effectively undermined the economic foundation of Detroit's economy. Second, they thereby dealt a major blow to any chances for an enduring US middle class. The past 40 years have displayed those consequences and the capitalist system's inability or unwillingness to stop, let alone reverse, them.

Real wages in the US stopped growing in the 1970s, and have not grown since, even as workers' rising productivity generated even more profits for employers. Rising consumer debt and overwork postponed for a few years the impacts of stagnant real wages on consumption. But by 2007, with wages stagnant and further consumer borrowing capacity exhausted, a long and deep crisis arrived. Employers used the resulting unemployment to attack job security and benefits and the public sector built up in the 1950s and 1960s to support the middle class (for example, by low-cost public higher education).

Auto industry capitalists took the lead and Detroit exemplified the economic decline that resulted. In the deep crisis since 2007, General Motors and Chrysler got federal bailouts, but Detroit did not. The auto companies got wage reductions (via the tiered wage system) that assured Detroit's wage-based economy could not recover, even as auto company production and profits did. The failures of private capitalism thus drew in the complicity of the federal government.

Despite what the heroic sit-down strikes and other actions of the United Auto Workers had earlier won for their members, the auto companies' decision-making powers remained in the hands of major shareholders and their boards of directors. They used that power to evade, weaken and eventually undo what union struggles had won. The unions proved incapable of stopping that process. Detroit's capitalists thus undermined the middle-class conditions workers had extracted from them – and thus destroyed the "capitalist success" city built on those conditions.

Detroit's decline, like the parallel decline of the United Auto Workers, teaches an inescapable lesson. The very contracts that militant unions win with employers give those employers great incentives to find ways around those contracts. They usually do.

The top-down structure of capitalist enterprises provides major shareholders and boards of directors with the resources (corporate profits) to cut or remove the good conditions unions can sometimes win. That's how this system works. Detroit has "been there and done that". The solution is not more contracts.

If the autoworkers had transformed the auto companies into worker co-operatives, Detroit would have evolved very differently. Worker co-operatives would not have moved production, thereby undermining their jobs, families and communities, including especially Detroit. Workers would not have destroyed themselves and their communities that way. Moving production, a distinctly capitalist strategy, was key to Detroit's population dropping from 1.8m in 1950 to 700,000 today.

Workers co-operatives would also have searched and likely found alternatives to moving that might have saved Detroit. Workers co-operatives, for example, would likely have paid less in dividends to owners and salaries to managers than was typical at Ford, General Motors and Chrysler. Those savings, if passed on in lower automobile prices, would have enabled better completion with European and Japanese car makers than Detroit's Big Three managed.

We cannot know how much more Detroit's auto industry might have benefited from technical progress had it been organized as a workers' co-operative. We can guess that workers have greater incentives to improve technology in co-operatives they own and operate than as employees in capitalist enterprises. Finally, worker co-operatives would likely have switched to producing (and helped to promote) mass-transit vehicles or other alternatives to the automobile to retain jobs and well-being once they saw that continued automobile production could not secure those priorities for worker co-operatives.

What kind of a society gives a relatively tiny number of people the position and power to make corporate decisions impacting millions in and around Detroit while it excludes those millions from participating in those decisions?

The simple answer to these questions: no genuinely democratic economy could or would work that way.