Jubilee, Denial and Beyond 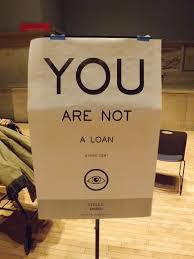 Thousands of years ago, various religions developed an idea some called “jubilee.” It entailed the acts of canceling or reversing income and/or wealth inequalities (especially of land holdings and debts) that had developed in their societies. Often, jubilees were stipulated to occur periodically every 49 years, more or less. The point was not to change the socio-economic system; it was rather to redistribute property and then restart the same system again as a way to preserve it. Variations of the jubilee idea have survived and occasionally surfaced into public discourse ever since.

The idea of jubilee was based on recognizing two tendencies in those societies and how they could threaten social cohesion. The first tendency emerged from their economic systems (their modes of producing and distributing wealth). It was movement toward ever-greater inequality of wealth and income until political authorities intervened to stop, slow or reverse that movement. The second tendency entailed beneficiaries of inequality using their wealth to prevent the political authorities from intervening in those ways. When both tendencies prevailed, the resulting extreme inequalities eventually brought the economy and society to crisis. Jubilee, it was thought, was the ultimate mechanism – the last political resort that was also sanctified by religion - that could forestall crisis by canceling or reversing such extremes.

Pre-capitalist economies based on individual farmers or slaves or feudal serfs often contained their tendencies toward inequality for centuries. Eventually, however, the beneficiaries of rising inequality blocked political authorities from mitigating inequalities. As the latter then worsened, the question was whether jubilee would re-emerge as the last-resort solution. When jubilee was forgotten, ignored, or repressed, such societies’ economies descended into extreme inequalities of wealth and income. Crises followed that could and sometimes did dissolve social cohesion and provoke revolutionary transitions to differently structured societies and economies.

Capitalism is no different. In the US, for example, economic inequality is reaching extremes not seen since the end of the 19th century. The reversal of inequality provoked by the Great Depression proved temporary. Even the crisis since 2007, the worst since the 1930s, has not deflected the US from its descent into extreme inequalities (as illustrated by the following chart from Too Much): 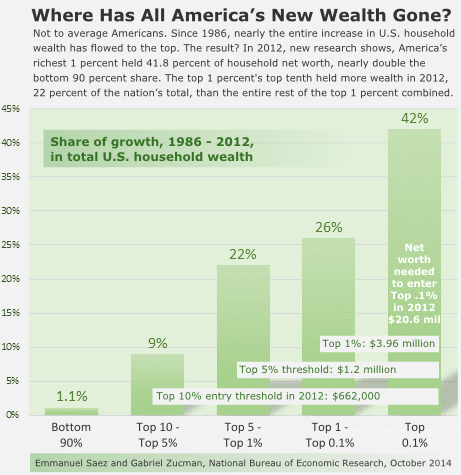 As Thomas Piketty’s and Emanuel Saez’s works have shown empirically, capitalism displays powerful, enduring tendencies toward ever greater inequalities. When these have approached extremes in the past, crises emerged that sometimes provoked reverse tendencies from political authorities. Considerations of jubilee were avoided. For example, income and wealth redistributions occurred during the Great Depression of the 1930s and/or after World War 2 with labels like the New Deal or Social Democracy. Yet they were soon slowed and then mostly stopped.

By the 1970s, capitalism’s underlying tendencies toward inequality reasserted themselves visibly. This occurred together with the strong ideological backlash of “neo-liberalism.” Against the redistributive New Deal and social democracy, neo-liberalism justified and rationalized the disengagement of the political authorities (led by Thatcher and Reagan) from redistributive projects everywhere.

The post-1970s increasing economic inequality had a specific geographic character. Capitalist enterprises relocated away from their old centers in western Europe, north America and Japan. Where modern capitalism had first developed, it concentrated factories, offices and stores. They drew food, raw materials, and laborers to those centers (urban and industrial) from their immediate hinterlands (rural and agricultural). They sold their outputs to those hinterlands. When capitalism’s old centers outgrew their immediate hinterlands, colonialism and imperialism reorganized the rest of the world into a peripheral hinterland.

Before the post-1970s relocation, modern labor movements and socialism had struggled for and won rising real wages in capitalism’s old centers. Elsewhere societies were disrupted or destroyed by their reorganization into peripheral hinterlands. Wages and living standards there often deteriorated. In any case they fell ever further behind their rising levels in capitalism’s old centers.

The 1970s also saw major technical changes. Among them, jet air travel and modern telecommunications enabled more rapid enterprise relocations. Capitalists headquartered in the old centers could visit, monitor and control production and distribution facilities far removed in regions offering much lower wages, minimal government regulations and taxes, etc. The profit potential was huge. The first who relocated and realized such profits made it competitively necessary for others to follow.

Relocation’s results were rising inequalities across most of global capitalism. In the old centers real wage growth stagnated or reversed over the last 40 years. In most of the new centers (e.g., China, India, Brazil, and so on), disproportionate shares of their newly expanding wealth went to the richest. Inequality grew there despite rising real wage levels (also because much smaller shares of the population were wage-earners).

In general, rising inequality flows from the excess of productivity growth over real wage growth: when what workers’ labors provide to employers rises faster than what employers pay to those workers. The ILO Global Wage Report 2014/2015 shows this for developed countries in the following graph:

Employers do not return that excess to the workers who produce it. Rather they distribute it among small minority portions of the population. Hence inequality grows. When employers deploy that excess to control political authorities, redistribution is blocked, limited, or rendered too small to reverse the growing inequality.

Contemporary societies show few signs of ideological shifts that might return jubilee to the consciousness – let alone the policy agendas – of political authorities.  The “austerity” regimes imposed in so many countries represent quite the opposite. Political authorities refuse policies that would reverse the growing inequality of recent decades. Despite the crisis since 2007 and even when authorities are “laborite” or “socialist,” they evidently believe that redistributive reversals are “impracticable” or “ineffective” or “unnecessary.” It is as if political leaders, mass media, and most academics had acquired some universal absolute truth: austerity is necessary while jubilee is absurd. Such are the power and rigidity, on occasion, of ideological commitment.

Yet contrary voices are raising warnings. In December, 2014, an OECD report called Focus on Inequality and Growth concluded that rising inequality across 21 countries was definitely associated with slowing economic growth. The aforementioned ILO report showed that by 2013, the global real wage growth rate had dropped by a third from its pre crisis (i.e. pre-2007) levels.

Other voices raised other sorts of critiques. Detroit residents offer their living conditions as consequences of the last 40 years’ deepening inequality. Thus, United Nations officials found violations of basic human rights in 2014 when Detroit failed to provide water to its poorest citizens. Voter shifts in Greece, Spain, Ireland and elsewhere show rising opposition to inequality.  Spanish conservatives seek new repressive laws to ban protests of economic inequality and the policies that worsen them.

Old political monopolies wielded jointly by alternating center-left and center-right parties are dying. Increasingly, new, further left and further right groupings struggle against one another and a shrinking center. A new Pope acknowledges the injustice of growing inequality and tries to distance his church from it.

Others react to deepening economic inequality by not questioning or opposing the institutions whose mechanisms and decisions generate the problem: large capitalist enterprises, the market, and the politicians beholden to them. Instead they seek and find scapegoats: immigrants; racial, ethnic, or religious minorities; the poor; “terrorists,” and so on. Often police are summoned to “manage” problems arising from deepening inequality and its social effects. When that task exceeds their capabilities, their actions often aggravate instead of manage.

In retrospect, those who developed jubilee understood something important even if their “solution” missed the basic changes needed. Yet these days, instead of considering jubilee, it is denial that spreads alongside the inequality and its negative social effects. Some deny the inequality exists and worsens while others deny those effects.

Of course, as 2015 begins, amidst the deepening of already extreme inequality, an article like this could choose between embracing jubilee versus denial. The former turns the clock back, re-apportions economic resources, and restarts the same system’s drive to inequality while the latter pretends that drive does not exist or matter much. Yet both of those options leave the basic economic system unquestioned.

It strikes this writer as better to explore and pursue basic social changes that can deal with the problem of economic inequality at its base. To take one example, what can and should be changed is the organizational structure of the enterprises that produce the goods and services on which all societies depend. A transformation of enterprises from top-down hierarchies into genuinely democratic institutions could better address the central modern problem of economic inequality (Wolff 2012).

Emmanuel Saez and Gabriel Zucman, “Wealth Inequality in the United States Since