Beyond Capitalism to Economic Democracy: A Radical Analysis & Solution 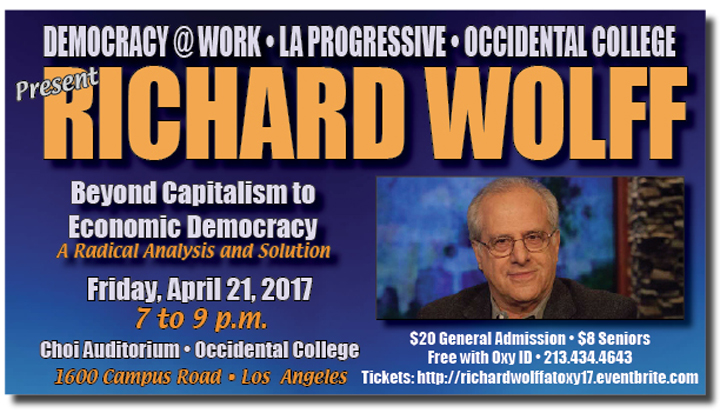 Thought-provoking economist Richard Wolff returns to Los Angeles to discuss the extreme downturn in most of capitalism’s old centers, the unequal growth in its new centers, and the resurgence of a global speculative bubble, making the case the the Great Recession should not be grasped as a passing moment, but as an evolving stage in capitalism’s unfolding history. Author of Capitalism’s Crisis Deepens: Essays on the Global Economic Meltdown and Democracy at Work: A Cure for Capitalism, Wolff will discuss how reforms now are too little, too late to solve capitalism’s mounting problems.
“2008 started capitalism’s second worst breakdown ever. Ongoing economic crisis (unemployment, disappearing middle class, and so on) has broadened into a social crisis,” Wolff reports. “Everywhere, old political establishments fall amid rising new left and right political alternatives (Sanders and Trump in US, Brexit in UK, and so on).”