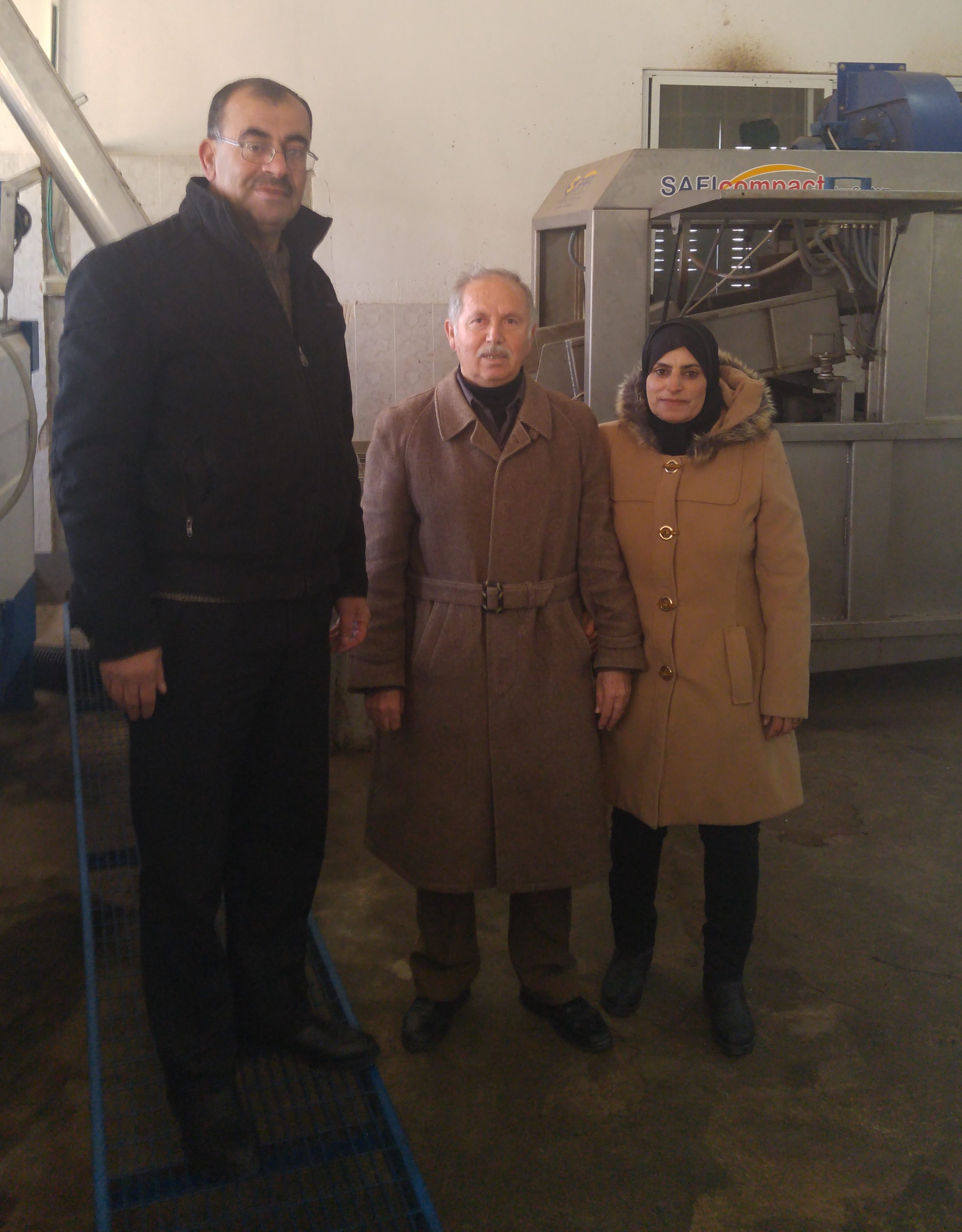 Daoud Al-Barghouthi (center) and his comrades.

In the midst of occupation, an economic experiment launched by a handful of Palestinian socialists has demonstrated a different way that the region's economy could develop if the Israeli occupation can be ended and resources made available to workers and village farmers. Residents of the West Bank village of Kafr Ein have established a modest olive oil cooperative to solve immediate economic problems. Inspired by old militants of the Palestinian Communist Party, the cooperative is democratic, participatory, and inclusive, with both men and women serving in positions of authority. The only limits to development this collective has faced are external – the lack of capital and the political situation. In spite of these obstacles, the Palestinian collectivizers of Kafr Ein have planted seeds that they hope will be harvested when the occupation ends and a liberated Palestine will see the development of a collective, democratic, socialist economy.

One the key organizers of the Kafr Ein collective is Daoud Al-Barghouthi. In his eighties now, Daoud is a wealth of stories from his days as an underground organizer for the Communist Party during the days of direct Israeli military governance. Daoud was a teacher, employed in the schools where he organized and participated in strikes and union organizing. Now in his retirement, Daoud is anything but inactive. With comrades from the Communist Party, rechristened the Palestinian People's Party in 1991, Daoud co-founded the Agricultural Land Company, an innocuous name for an ambitious project.

The cooperative, like Marx's conception of socialism, was not established with a blueprint imposed on a hostile reality. It was established to solve immediate problems faced by the villagers. In villages like Kafr Ein, capitalist development is running its course. Much of the Palestinian cultural heritage is rooted in the soil of the villages along with the olive trees that have been the mainstay of the village economies for centuries. However, through a combination of soil erosion, past land-purchases by capitalist enterprises, and the whittling away of inheritance over the generations, many farmers are left with small plots of land, just 10, 7, or even 6 dunams (10,764 sq ft). Given the dynamics of capitalism, these farmers would get jobs in the city, neglecting or selling their plots of land, and eventually the village would disintegrate.

The cooperative offers a socialist solution to rural disintegration. Starting in 2008, the foundations for the cooperative were laid, first through careful study of the problems of the village – analyzing the farmers' needs and abilities. Small farmers would have to become collective farmers. They would need training in intensive agriculture, access to wider markets, and the whole project lacked capital. According to Daoud the cooperative was formally founded in 2009 when fifteen farmers from Kofr Ein and the surrounding villages pooled their resources, each contributing  600 Jordanian Dollars. More farmers would have joined the cooperative if they had the money pay for a share.

Despite its meagre start, the cooperative was successful. According to Daoud, NGOs associated with the E.U., particularly and NGO called Park, worked hard and made the expertise of trained agronomists available to the cooperative. In the years after its founding, the cooperative incorporated 20 farmers, cultivating ten dunams each, and working together on water well construction, pruning, and building walls to prevent soil erosion. The cooperative fought intense struggles against insects – olive oil butterfly, and peacock eye disease – using only organic solutions.

The most formidable barrier to the growth of the cooperative is lack of capital. While the cooperative member were sharing resources and knowledge obtained from Park, they still cultivated and processed their crops and individually hauled them to the commercial olive presses. Daoud and his comrades dreamed bigger – they wanted their own olive press. But a modern olive press means laying out hundreds of thousands of dollars. The only way to obtain that amount of capital is to obtain a loan. After much searching, the cooperative found a microfinance company called Reef. They agreed on a loan - $300,000 at 4% interest. Daoud and the cooperative hoped to pay back the 300,000 plus interest over five years for a total of $360,000.

The olive press, imported from Italy, gave the cooperative the capacity to produce high quality organic olive oil. On October 19, 2015, the press started running and since that time Agricultural Land Company olive oil has been sold by the bottle at a stand in Ramallah's busiest intersection. Radio commercials for olive oil and other products are broadcast on the major radio stations thanks to the cooperative's efforts.

However, fate and inexperience conspired to create problems for the collective. The cost of running the press turned out to be 20 percent higher than Daoud and his colleagues anticipated. Furthermore two bad years of harvests associated with some of the region's most bitter climate change-induced winters wreaked havoc on the olive harvest. Since 2015, the collective has only been able to repay $58,000 of the microfinance loan. While they are confident that they will eventually pay back the loan, the company will have made tens of thousand more in interest from the cooperative's hard work.

In spite of the challenges, Daoud is confident and proud of the collective and its continued achievements. He says, “If you want to be a socialist, you must be a socialist in practice. Theory and practice go together.” The Agricultural Land Company is a demonstration that a collective economy can be built to solve the problems imposed by capitalism. The obstacles are not to be found in the people who do the work. The obstacles are lack of easy access to capital, and a government policy that does not look for ways of transforming the economy. On this point, Daoud exclaimed, “Every month today the Palestinian Authority purchases olive oil from outside. There is no reason they couldn’t buy it from the cooperatives!”

In the long run, the cooperative may or may not succeed as a business within a capitalist economy under conditions of military occupation by the Israeli state. But for Daoud and his comrades their goals are clear.  As he told me in a recent message,  “My group and I are working economically to establish a new kind of economy, not a capitalist economy but a cooperative economy. This is our economical and political goal.”

*To contact Daoud regarding the collective, they are actively seeking connections and solidarity. Write to: Daoud Al-Barghouthi: [email protected]

Mike Noonan is a graduate student in the Political Science M.A. program at San Francisco State, and an activist with the socialist group Speak Out Now! His research is focused on questions of class, capitalism, and social movements in Palestine. His research has been made possible by the generosity and inspiration provided by the residents of the village of Nabi Salih. Email: [email protected]