How Racism Is an Essential Tool for Maintaining the Capitalist Order 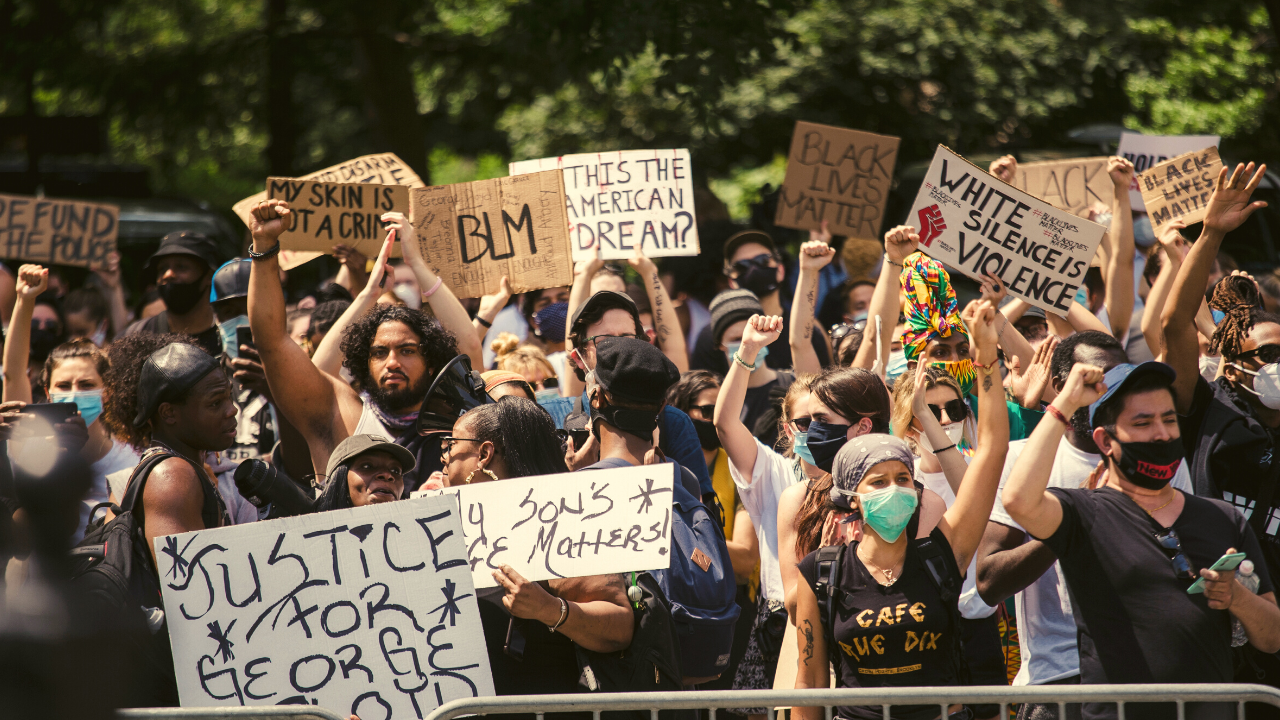 This article was produced by Economy for All, a project of the Independent Media Institute

U.S. capitalism survived because it found a solution to the basic problem of its instability, its business cycles. Since capitalism never could end cyclical downturns and their awful effects, its survival required making those effects somehow socially tolerable. Systemic racism survived in the post-Civil War United States partly because it helped to achieve that tolerability. Capitalism provided conditions for the reproduction of systemic racism, and vice versa.

Every four to seven years, on average, capitalism produces a downturn (“recession,” “depression,” “bust,” “crash”—many words for a problem so regularly repeated). Political leaders, economists, and others have long searched for a cure for capitalism’s instability. None was ever found. Capitalism has thus already recorded three crashes in this new century (spring of 2000, autumn of 2008, and now in 2020).

Defenders of capitalism prefer to call its inescapable instability the “business cycle.” That sounds less awful. Yet its cycles’ hard reality has always frightened capitalism’s defenders. They recognize that when large numbers of people suddenly lose their jobs, many businesses die, production shrinks, and governments lose tax revenues, the results can and often do threaten the entire economic system. Capitalism’s cyclical crises could potentially turn their victims against it and make them receptive to the system’s critics.

This would more likely happen if everyone in the society were roughly equally vulnerable to cyclical downturns. Most employees would then rightly worry that their jobs would be lost in the next crash. They would periodically face income losses, interrupted educations, lost homes, and so on. Whatever relief employees felt if neighbors, rather than themselves, got fired, they would know that it might well be their turn in the next cycle. The losses, insecurities, and anxieties produced by such a capitalism would long ago have turned employees against it and provoked transition to a different system.

U.S. capitalism solved its instability problem by making cyclical downturns afflict chiefly a minority subpart of the whole working class. It positioned that minority to bear the brunt of each cycle and suffer its damages disproportionally. That minority was repeatedly drawn into and then thrown out of jobs as the cycle dictated. Any savings it might accumulate when working would be lost when unemployed. Repeated firings precluded such a minority from enjoying the benefits of job longevity (seniority, promotion, household stability, etc.). Poverty, disrupted households and families, unaffordable housing, education, and medical care would haunt such a minority. It would become capitalism’s “business cycle shock-absorber”—the last hired, first fired—across the four-to-seven year average duration of its cycles.

For capitalism, making such a minority absorb most of the costs of capitalism’s instability allowed the majority of the working class to be relatively exempted, relieved, freed from them. The majority could be less subject to cycles because the minority was made relatively much more subject. Capitalism promised the majority relatively secure jobs and incomes because it took those away from the minority. The majority could thus worry less about the next cycle, whereas the minority had to worry more and adjust their lives more. Racists could then attribute the resulting differences between minority and majority subparts of a population to inherent qualities of different “races” instead.

Other advanced capitalist countries found parallel solutions. Some condemned immigrants to play the role assigned to African Americans in the United States. Racism aimed at immigrants often followed. In cyclical upswings, immigrants would be brought in: North Africans into France, southern Italians into Switzerland, Turks into Germany, and so on. Then, cyclical downswings would return those immigrants to their home countries. Capitalisms would thus save on costs of unemployment insurance, welfare payments, etc., for the workers who had returned. While some capitalisms relied on domestic minorities to be shock-absorbers and others relied on immigrants, some countries relied on both. The United States used Central American immigrants alongside domestic African Americans, and it still does. Germany allowed some immigrants to settle and acquire German citizenship alongside Turkish and other immigrant “guest workers.”

In the United States, married white women also played the role of business cycle shock-absorber. During cyclical upswings, they would enter the paid labour force in part-time or full-time positions. Like African Americans, they earned less than white men. Women’s jobs, too, were likely to be temporary, undone by cyclical downturns.

Whatever communities were forced into the shock-absorber role, poverty, depression, broken families, slums, and inadequate education and health facilities became more widespread among them than they were among the majority of the working class. Insecure jobs, incomes, homes, and lives often bred bitterness, envy, desperation, crime, and violence. These collateral damages had to be “managed” by the capitalisms whose survival depended on producing and reproducing those communities. Police and prisons were and are assigned that management task.

Police and prisons were to “keep the lid on,” “tame,” “patrol and control” the restive portions of the shock-absorber communities sequestered in slums or ghettos. Interactions with police coupled with cycling and recycling through prisons were the chosen means to manage capitalism’s collateral damage. Those means generated collateral damage of their own: the long, tragic record of police violence, use of excessive force, the harshness and violence of incarceration, and the killing especially of African Americans.

Why were African Americans “chosen” to be key (but not the only) cyclical shock-absorbers in the United States? One factor concerned the racist legacies of U.S. slavery. They included beliefs that slaves were either not fully human or inferior humans. Even the U.S. Constitution had counted a slave as merely three-fifths of a full (i.e., white) person for census purposes. Accommodation to slavery before the U.S. Civil War had already shaped a racialized consciousness in both masters and slaves. And because U.S. slavery entailed different skin colours for masters and slaves (unlike many slaveries in world history), a readily identifiable minority had already been defined in racial terms in the slave portions of the United States. Moreover, that definition had spread to other parts of the United States as well. U.S. capitalism used, absorbed, and built on slavery’s legacy by inserting large portions of the African American community into the shock-absorber role that the system required. The racism developed by U.S. slavery thereby both facilitated U.S. capitalism and was reinforced by it.

A significant portion of the white working class in all capitalisms has always also been forced into the shock-absorber role. “White trash” in U.S. capitalism was never far from the African Americans similarly situated. There thus arose possibilities of class solidarity between these Black and white working-class communities. U.S. history displays moments when those possibilities were realized, as C. Vann Woodward documented so well. It also displays moments of intense racist violence used to block the realization of those possibilities. Employers played on racialized differences to keep employees from unifying against them. In bitter competitions between Black and white shock-absorbers for cyclically scarce jobs, whites could and often did use racism to gain advantages in access to those jobs. In multiple ways, then, capitalism fostered and benefited from racism; it thus settled deeply into the system.

Fundamental injustice characterized the relationship between police and prisons, on the one hand, and the African American and other communities (Indigenous, people of color) condemned to play capitalism’s shock-absorber role, on the other. The solution was and is not better training or more funding; both have been tried repeatedly and both have likewise failed repeatedly. A real solution would provide a decently paid job to everyone who wants one as a matter of right. Unemployment would then be outlawed much like slavery, child abuse, etc. Taxes levied on capitalist enterprises would provide the funds needed to find jobs, private or public, for those laid off by an employer (much as such taxes help fund unemployment insurance now). Those funds would include wages or salaries paid for each worker’s time between being laid off and rehired. Minimum wages, applied universally, would cover reasonable housing, transport, health care and other living costs.

If such a solution were deemed to be incompatible with capitalism as a system, capitalism would have to give way to a system that made adequately paid employment a basic right for all. Enterprise profit would then finally be ejected from its throne as capitalism’s number one social priority.

Such a solution would finally free African Americans, Indigenous, and Brown people from long-standing abuses in and by police and prisons. It would thus reduce the racism that those institutions have exemplified and reinforced. It would also reduce pressures on police and prison personnel to behave in ways that self-destructively rob them of their humanity as well as oppress others. Police and prisons in the United States today serve an inherently unstable capitalism by means of systemic racism. The logic of alliance between anti-racism and anti-capitalism could not be clearer.