The Political Economy of Austerity Now 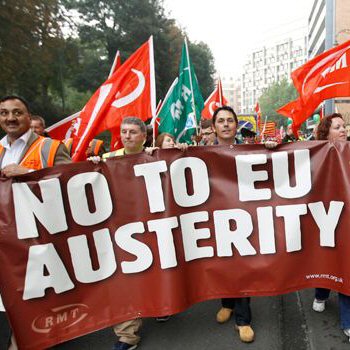 This article originally appeared at MRzine.monthlyreview.org

Government austerity for the masses (raising taxes and cutting public services) is becoming the issue shaping politics in western Europe, north America, and Japan. In the US, austerity turned millions away from the polls where before they supported an Obama who promised changes from such policies. So Republicans will control Congress and conflicts over austerity will accelerate. In Europe, from Ireland's Sinn Fein to Spain's Podemos to Greece's Syriza, we see challenges to a shaken, wounded political status quo (endless oscillations between center-left and center-right regimes imposing austerity). Those challenges build impressive strength on anti-austerity themes above all else. In Japan, Prime Minister Abe resorts to ever more desperate political maneuvers to maintain austerity there.

In responding to austerity, ever more people find their way to a critical understanding of capitalism. Beyond blaming individuals or groups, such people condemn the system, capitalism, whose structure of incentives (rewards and punishments) drives their behaviors. That system brought the 2007/2008 crisis. It then delivered trillions in government bailouts to fund its survival. And now austerity serves to shift the costs of crisis and bailouts onto the general public. Austerity is today's hot issue not only because it affects practically everyone, but also because it touches the foundations of economy and society.

The austerity policies imposed on western Europe, north America, and Japan are consequences of capitalism's massive relocation underway since the 1970s. Where modern capitalism began (western Europe, then north America and Japan), its production and distribution facilities grew and concentrated mostly in certain industrialized towns and cities from the 1770s to the 1970s. Those regions' rural and agricultural areas became capitalism's "hinterlands" providing industry with food, raw materials, workers, and markets for capitalists' outputs. When local hinterlands proved insufficient, colonialism turned the rest of the world into such hinterlands. Along the way, increasingly well-organized working classes in western Europe, north America, and Japan won rising wages in tough struggles with capitalists there. In contrast, incomes of most people in the colonized hinterlands shrank.

By the 1970s, the wage gap between the capitalist centers and their hinterlands had become immense. That gap, together with the inventions of jet engine air travel and modern telecommunications, created an historic opportunity for capitalists. They could dramatically increase profits by relocating production. Jets and global telecommunications enabled western European, north American, and Japanese capitalists to monitor and control the production and distribution they relocated to new low-wage centers (in China, India, Brazil, and so on). Only the top direction, financing, and diplomatic/military control centers remained in the old capitalist centers.

Capitalist relocation seriously weakened working-class organizations (labor unions and left political parties) in the old centers. Simultaneously, rising profits from that relocation funded capitalists' massive campaigns for neo-liberalist ideology and increased capitalists' influence on politics. The growing inequality of wealth and income flowing from capitalism's relocation enabled a growing inequality in political power and influence wielded by capital versus labor. This shaped both the changing relations among political parties and among tendencies within parties.

When yet another of its recurring cyclical downturns occurred in 2007/2008, working classes in the old capitalist centers had lost the cohesion and organization they had achieved in the 1930s and the 1940s. They could not force again programs like the New Deal in the US or Europe's post-World War 2 social democracy. Capitalists in 2007/2008, like those in the 1930s Great Depression, wanted government help quickly to overcome the crisis (money from central banks and a quick jolt of stimulus paid for by government borrowing). They got that, and once the economy was functioning again (2009-2010), capitalists feared the risk of more taxes for them if government stimulus programs would be extended to the masses (to reduce unemployment and housing foreclosures or to support public services).

Many major capitalists in western Europe, north America, and Japan are losing interest in their home economies because they have become slow-growing or "mature." Their business futures exist rather in the "fast growth areas" of capitalism's relocation. So they changed the focus of economic discussion in 2009/2010: the problem in western Europe, north America, and Japan was no longer economic crisis for the masses, but instead it was government deficits.

Deficits were "the" problem. Moreover, the solution could not be raising taxes on capitalists since that would only accelerate their relocations causing further economic difficulties. The "necessary" solution was austerity: increased broad-based taxes and/or public spending cutbacks that would reduce government deficits. The masses would suffer, but they lacked the organizational strength and ideological support to prevent that. Capitalists would applaud governments imposing austerity because that socialized the costs of the crisis, shifting them from capitalists onto the mass of people.

Capitalists considering relocation have historically threatened their employees, host communities, and governments. They will leave, they say, unless they get tax cuts, subsidies, special privileges, favorable regulatory and legal changes, and so on. The threat is now continental. Austerity is what capitalists have demanded now, or else. A generation of political leaders that has watched capitalists' power grow while labor's power declines understands austerity to be what is "realistically possible."

The solution is to rebuild the old or build new powerful working-class organizations. They must confront not just austerity but its foundations. Those include the "freedom" of capitalists to relocate when and where they wish regardless of the social costs and consequences. Where production is located -- and how it is organized and to whom outputs and revenues are distributed -- are basic economic decisions with profound social consequences. Democracy requires that they be made by and for the majority.

Capitalism blocks and negates that economic democracy. It privileges capitalists' freedom to invest over the majority's freedom to participate democratically in determining their jobs, job conditions, and what is done with the profits their labor helps to produce. Today, workers' struggles against austerity are educating them to grasp and confront basic capitalist privileges and their incompatibility with democracy or the economic needs of the people. That is why today's governments are so determined to maintain austerity and so fearful if austerity fails and falls even in one small country like Greece.