The Wages of Global Capitalism 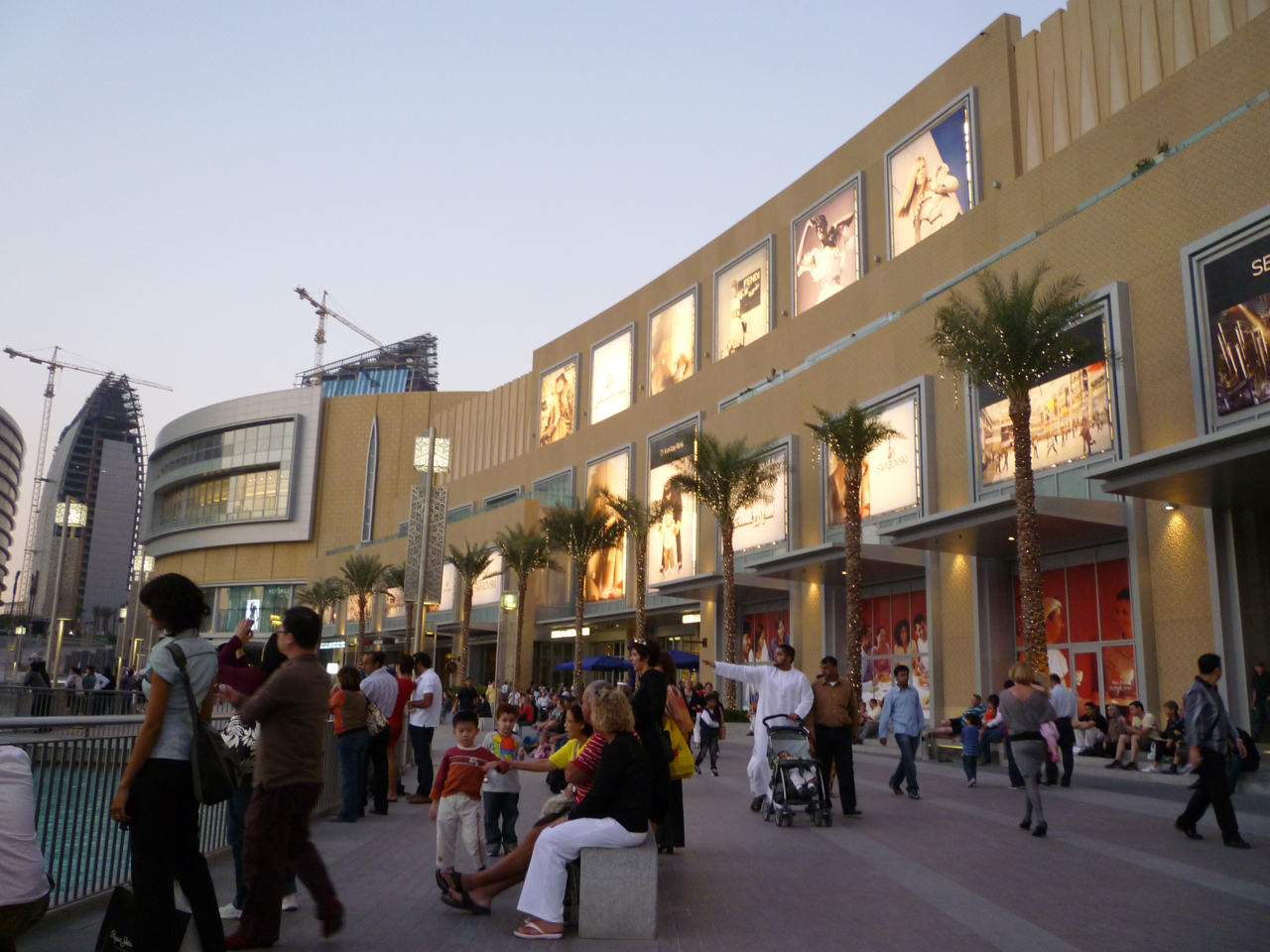 In the "developed world" wage growth in 2012 was 0.1 percent, and in 2013 it was 0.2 percent. Far from portending any economic "recovery," that level of wage "growth" is rather called "wage stagnation." In stunning contrast, wage growth in the major emerging growth economies was much better: 6.7 percent in 2012 and 5.9 percent in 2013.

These remarkable statistics come from the Global Wage Report 2014/15 released on December 5, 2014, by its author, the International Labor Organization (ILO). This report clearly exposes the immense costs of a globalizing capitalism for the wage-earning majorities in Western Europe, North America and Japan. Allowing their leading capitalists to maximize profits by relocating production out of those regions is deeply and increasingly destructive to them.

The ILO report's chart below summarizes the key wage results of the last decade's capitalism. Economic growth, rising real wages and rising standards of living are economic realities in China and other emerging growth countries. Economic crisis, stagnant wages and declining working and living standards are the economic realities for Western Europe, the United States and Japan. 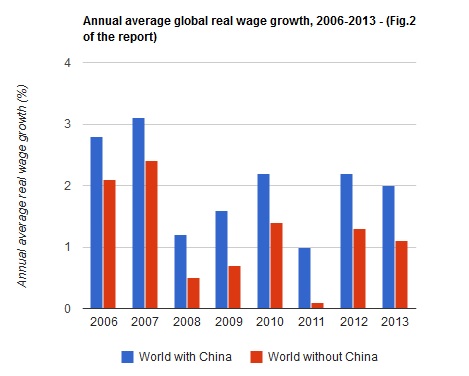 Capitalist enterprises keep moving their operations (first manufacturing, now also many services) from high to low-wage regions of the world to raise their profits. Departing capitalists leave their former host communities with unemployment and all its social costs. Such conditions force desperate competition for jobs that drives down wages and guts job benefits. Public services decline as government budgets suffer. Capitalism no longer delivers a rising standard of living in the regions where it began and developed first: Western Europe, North America and Japan. Instead of goods, capitalism delivers the bads.

A second key insight emerges from another chart (below) in the ILO report. In the developed countries, while real wages stagnated throughout the crisis since 2007, the productivity of workers continued to rise. That explains the deepening inequalities of income and wealth in those countries. 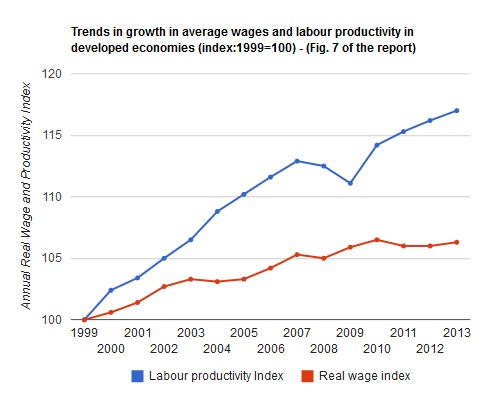 Productivity measures the quantity of goods and services that workers' labor provides to their bosses. The chart shows how labor productivity has kept rising (because of computers, more equipment, better training, speed-up of work etc.). The chart also shows how much less wages have risen. Wages are what capitalists pay workers for their labor.

There is thus a growing gap between what workers give capitalists (productivity) and what capitalists give workers (wages). That gap measures profits. They have grown the fastest of all. Major capitalist corporations gather those exploding profits into their hands. They pay their top executives huge salaries and bonuses, pay rich dividends and deliver huge capital gains to their shareholders. Those top executives and major shareholders are most of the super-rich who have taken so much of the nation's wealth.

European, US and Japanese politicians, controlled by their major capitalists, do little to stop the relocation of production that generates the results seen in the charts above. Labor and anti-capitalist movements are still too weak, too divided or too poorly informed to stop the long-term decline underway.

The real question of the day underscored by the ILO report is this: Will Western European, North American and Japanese working people consent to the further undermining of their well-being that follows as capitalists leave for higher profits?That is the question even though mainstream politicians, media and academics cannot see it or refuse to discuss it.

The answer to that question can still be "no." The labor, anti-capitalist and social movements can understand this situation. They could ally politically to stop paying the horrendous costs of globalizing capitalism while a tiny minority grabs its ballooning profits.

A final note: Real wages are still three times higher in developed countries than in economically emerging regions. Thus, capitalists keep getting the higher profits that motivate their relocation out of Western Europe, North America and Japan. They share some of those higher profits (via mergers, acquisitions, bribes etc.) with major local capitalist corporations inside the regions to which they relocate. Relocating capitalists offer such payoffs to facilitate their success in these new centers of capitalism's growth.

Those payoffs help explain the gross inequalities of income and wealth deepening in the emerging economies, too. Globalizing capitalism thus imposes on most countries the worsening inequalities that bring ever closer the validity of that old slogan (premature when first articulated): "Workers of the world unite; you have nothing to lose but your chains."