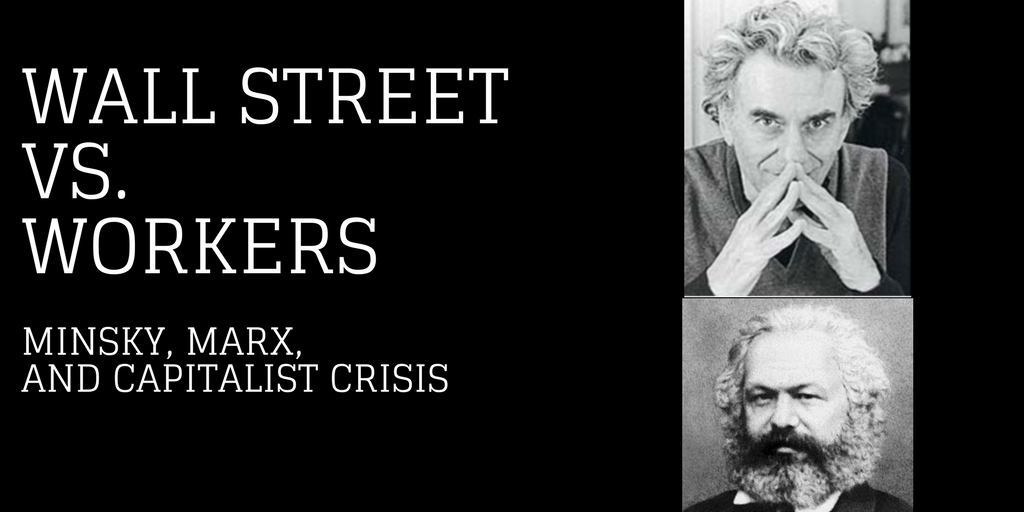 “The Wall Streets of this world are important; they generate destabilizing forces, and from time to time the financial processes of our economy lead to serious threats of financial and economic instability, that is, the behavior of the economy becomes incoherent.” – Hyman Minsky, Stabilizing and Unstable Economy

Published in 1986, the once obscure economist Hyman Minsky would become relevant, indeed revered, by those trying to make sense of what exactly happened after the 2007 financial crisis. Minsky’s Financial Instability Hypothesis is elegant in its dual simplicity and insightfulness. Simply put, stability is destabilizing. Minsky’s theory strays from traditional, or ‘neoclassical’, theories not only in that it actually takes money and finance into account when looking at economic phenomena (yes, that’s right, conventional economists don’t think money and finance play a significant role in deriving their models), but he also situates the economy within an institutional and historical time frame, something that most abstract models disregard.

His thesis, crudely put, goes something like this. After a period of economic crisis, lenders are reluctant to make risky loans, with the recent memory of economic turmoil still fresh in their minds. Making only sound and measured loans whose interest and principal is being repaid, they rest easy at night knowing they’re engaged in relatively risk-free activity. This form of lending is referred to by Minsky as “hedge finance” (distinct from the investment vehicles we’ve come to know and love, “hedge funds”). As things begin moving along nicely, their eagerness for making more speculative investments begins to rise, engaging in loans whose interest can be repaid, but whose principal must be rolled over at regular intervals. Appropriately, this type of lending Minsky referred to as “speculative finance.” You can probably see where this is going but I’ll finish his hypothesis. Now with investment rising and stocks increasing in value as a result, everybody (i.e. in the investor class) is happy, perhaps ecstatic. Loans begin to be made to everyone and anyone, regardless of their ability to pay back even interest. The interest gets capitalized, that is it is added to the principal and these loans become ever more unsustainable. These are the riskiest of all the types of lending, and Minsky called this type “Ponzi finance,” after the (not so) infamous Italian immigrant Charles Ponzi, known for his investment schemes of promising 100% returns to his clients after just 3 months. What Ponzi didn’t reveal was that he would repay older clients with new clients’ money. He would die broke and physically debilitated in a charity hospital in Brazil. We probably won’t be able to say the same for today’s wealthiest investors. I digress.

The logic behind Minsky’s argument about the financial sector and economic crises is discerning. The recent volatility in the stock market has every pundit and analyst guessing as to why, last week, the markets officially entered into a correction, that is they dropped by 10% from their peak in late January. Although equities have indeed been rising since the election of Donald Trump, something he’s been ever so humble about, they were already on the rise for nearly nine years since the ‘official’ end of the Great Recession in June 2009. And although markets seem to be rebounding, Minsky’s analysis, laden with concepts such as herd behavior and fallacies of composition, can still teach us a lot about why certain rapid fluctuations occur. It does not, however, tell us about the class dynamics at play. But for what Minsky lacks in class analysis, Marx and his predecessors more than make up for.

The standard explanation going around as to why stocks began a precipitous decline has to do with the Federal Reserve. Investors are fearing that an impending rise in interest-rates due to inflation fears will cut into corporations’ ability to borrow, eat into profits, and as a consequence devalue their stocks. At the same time, as interest rates rise, bond yields follow suit, making them more attractive and thus encouraging a shift for investors from equities to debt. On the flip side of the coin, as stock prices fall, retirement accounts invested in them fall and people begin spending less. This confluence of factors leads to a weaker economy. For those investors ‘buying on margin’, or borrowing money to purchase stocks, this scenario is, à la Candide inverted, the worst of all possible worlds.

So where does class come into all of this? Well, to start, as Patricia Cohen recently noted in The New York Times, “A whopping 84 percent of all stocks owned by Americans belong to the wealthiest 10 percent of households.” This includes everyone with pensions, 401(k)s and IRAs, trust funds, mutual funds, and college saving programs. But while the average working person may not be personally affected directly by mood swings at the stock exchanges, they may have a lot more to do with why the sudden change of heart occurred in the first place.

As unemployment rates stay low (4.1% for the fourth consecutive month), hourly earnings are reported to have rose by 2.9% in January from a year earlier. All of this sounds like good news. In fact, it sounds like what gets politicians elected, with promises and rhetoric of economic security and upward mobility for all. So, what’s the problem? Answering this question essentially gets at the heart of the inherent class antagonisms built into the system. As unemployment falls, it becomes more difficult for employers to find workers. To attract them, they offer higher wages, greater benefits, etc. Competition between employers bids up the price of labor. Workers exercise their newly gained bargaining power. With all things held equal, profits begin to fall. To compensate for this, they attempt to pass the rise in the price of labor onto the consumer by charging higher prices for their final goods/services. And voilà, inflation.

This is the Marxian notion of the ‘rising strength of labor variant’ in the decline of the rate of profit and is used to explain the formation of crises. James Crotty and Raford Boddy, in their 1975 article “Class Conflict and Macro-Policy: The Political Business Cycle” explain that the state’s role becomes clear in such times: intervene on behalf of employers. To curb inflation, the Fed raises interest-rates, making borrowing and investing harder, leading businesses to lay off workers and, hopefully, pushing down the specter of inflation. While this may seem illogical in that it harms some businesses’ bottom-lines in the short-term, the goal is to increase the profitability (power) of the wider private economy (capitalists) in the long-run.

Contrary to the politically-charged notion of a “free market”, unencumbered by the big, bad government, state intervention is crucial for the realization and maintenance of profits of the private sector. And in many more ways than just the Fed’s role for borrowing. But the point I’m trying to make is this: besides just the ‘natural’ volatility, if you will, of the stock market already, due to what Minsky conceived of as ‘destabilizing stability’, the notion of class conflict is not only theoretical, but observable in investor’s fear of a meager increase in wages over the past year. Compare that to stagnating (and in some estimates declining) wages we’ve experienced for the average worker since the 70s, and into biting relief appears the true nature of the system we live and work in every day.

So, if you aren’t an investor in stocks, then you may be largely unconcerned about the news this week. But if you are just a mere worker in this big game of capital, and you’re thinking of asking for a raise sometime soon, have a little decency and think about all those poor, wealthy speculators on Wall Street that may just suffer at the hands of your request.

Dante Dallavalle is a graduate student of Economics at John Jay College in NYC and the co-host of Left Out  — a podcast that creates in-depth conversations with the most interesting political thinkers, heterodox economists, and organizers on the Left.. He can be reached at [email protected].