We need community to stop gentrification 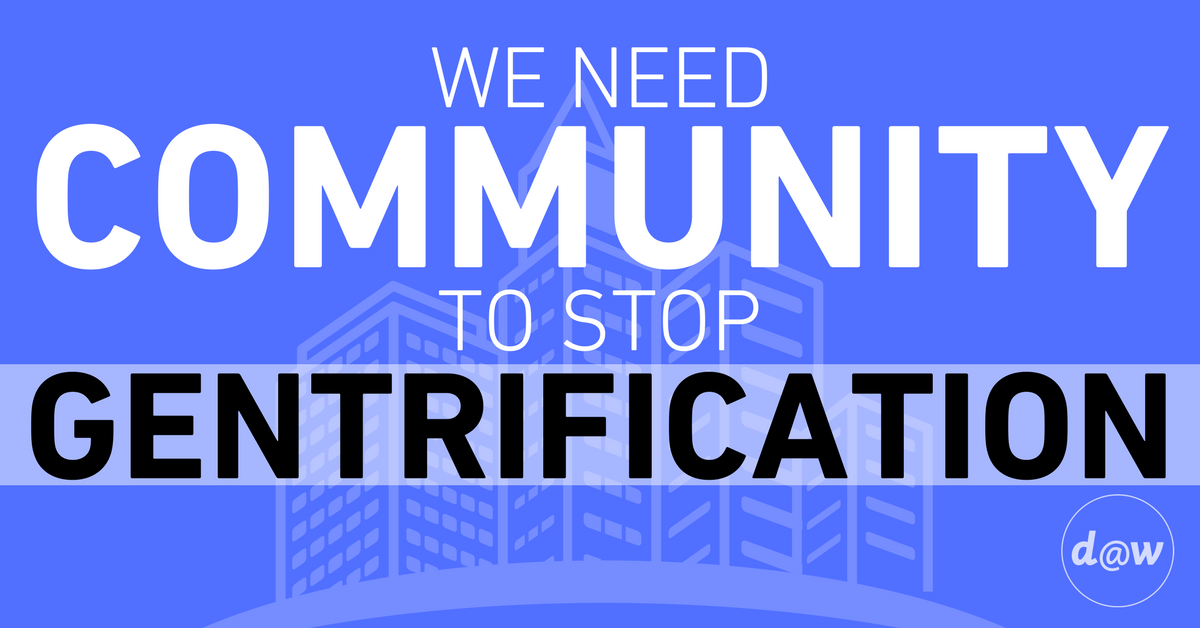 Over the decades, no other Los Angeles neighborhood has given rise to the same number of activist groups as Boyle Heights. Before being cut off from the rest of the city by the East Los Angeles Interchange (a knot of freeways so intertwined to give even the most qualified engineers nightmares), Boyle Heights was a vibrant community. The epitome of the US melting pot, the neighborhood welcomed people from all over the world. But every decade has seen parts of its population displaced. In the 1930s, it was Mexican deportations; Japanese internment in the ‘40s; post-WW-II, white flight. In the ‘80s, Boyle Heights became notorious for gang activity. Finally, in recent years, you cannot utter the words “Boyle” and “Heights”, without invoking… gentrification.

A hop, skip, and a jump from newly-revamped Downtown, Boyle Heights is valuable property. And no profit-maximizing real estate developer is going to leave it alone. But what will be of the current residents, many of whom don’t own, but rent, when development begins? And what of the businesses that have been in the neighborhood for years? Where will they go, when rents increase, trendy coffee shops selling overpriced lattes spread like the plague, and art galleries promoting the Anglo-Saxon version of art take over the local culture? Any profit-maximizing real estate developer would respond with a dry: “They will leave.”

But the residents of Boyle Heights aren’t going quietly at all. And that’s why Democracy at Work – Los Angeles ([email protected]) invited Union de Vecinos (UdV), an anti-gentrification activist group from the neighborhood, to be the guest speaker at [email protected]’s June 2017 meeting.

UdV was founded in 1996. At that time, the US Congress under President Clinton made drastic budget cuts to reduce the nation’s deficit. “They wanted to get out of the business of public housing and demolish 100,000 units of public housing across the country,” said Elizabeth Blaney, an organizer with UdV. One of the first projects targeted was Pico-Aliso Village in Boyle Heights. With 1,285 units, it was the largest concentration of public housing west of the Mississippi. To protest the decision to demolish their homes, residents turned toward their communities of faith, hoping to garner some support. But that didn’t happen. So the people founded Union de Vecinos, or “Union of Neighbors.”

“Since then,” continued Blaney, “we’ve been fighting. We started forming neighborhood committees, as some of our members did leave to other parts of Boyle Heights and then other parts of the city.” UdV organizes on a very micro level, geographical down to the city block. Each neighborhood committee constructs its own campaign around issues that are significant to that set of members. The Union then helps coordinate the campaigns across Los Angeles.

Ofelia Platón, another UdV organizer at the meeting, spoke of one of the first committees. Its goal was to clean the streets and alleyways, and ensure pedestrian safety. In fact, there were few stop signs and traffic lights, so car accidents were an unfortunate and regular occurrence. “Little by little, goals were achieved. We worked hard, spending time with young people, those who would mark the streets with graffiti.”

Indeed, part of Union de Vecinos’ work is reducing the conditions that create violence. First, the community analyzes the problem in the identified public space and brainstorms projects to prioritize in order to address the problem. After fundraising for the projects, the community implements the changes.

Fifteen once unsafe public spaces in Boyle Heights and in the nearby City of Maywood have been turned into community spaces for mercados, meetings, and community celebrations. 4,500 residents have benefitted from the changes without seeing their culture whitewashed and cosmeticized in the process. All this was achieved thanks to community role modeling, not by bringing in police.

A second aspect of UdV’s work entails fighting against illegal and/or excessive rent increases. Despite 90% of apartments in Boyle Heights being under rent control, people don’t know their rights. Rampant abuse and harassment by landlords against tenants is common.

The third organizer at the meeting, Francisco Gonzalez, exposed some of the tactics to which tenants have resorted in one of the non-rent controlled apartments. His landlord demanded a rent increase of $800 per month. Francisco and his neighbors were shocked, and tried to negotiate, but the landlord denied the possibility of collective bargaining. Shortly thereafter, the tenants began to notice ‘different people’ (read: white hipsters) checking out the building.

“When we saw people coming in, we had music, loud music. We wanted to be annoying. That was the point.” In effort to scare off the potential new tenants, the current ones even asked a “gangster-looking” acquaintance to walk around the apartment complex as if he lived there. The effect: “People were coming in, and they didn’t even stay for three minutes. They were like, leaving!”

But similar tactics, albeit effective, can only go so far. In an effort to help curb landlord abuse and raise tenants awareness of their right, UdV helped co-found LA Tenants Union (LATU).

LATU is organized much like UdV. At the lowest level, LATU helps strengthen ties among neighbors through tenant associations. Local chapters of the union are one step up in the organizational ladder. They bring together tenant associations to address neighborhood issues in solidarity. Finally, as an umbrella to the group, the Union “unites local chapter and individual renters into a powerful and diverse movement for housing justice for all.”

At this point, some statistics may help to frame UdV and LATU’s struggles in a broader context. Based on 2015 Census data, a study by Adobo found that the Los Angeles-Long Beach-Anaheim urban area has the fourth highest percentage of renters in the nation. About 53% of homes in the area are rented. Rent affordability is a real issue in a city that saw a 23% increase in its homeless population. Despite being one of the few cities in California to have rent control laws, not all apartments are covered. Add to that the fact that rents in Los Angeles have increased more than anywhere else in the country, and you get a serious problem.

From its founding, UdV has been in the fight for housing, as well. There are more than 6,500 units of public housing in LA, and about 25% of those are located in Boyle Heights.

When demand for housing is met by a low-cost public supply, the price of market rent is driven down. In an effort to funnel more money into their accounts, private interests have put pressure on local and federal governments to abolish public housing.

After the 2008 subprime mortgage crisis hit, there were no funds for the demolition of public housing developments. Instead a far more insidious measure was taken. The federal government implemented a program known as R.A.D. (Rental Assistance Demonstration). RAD theoretically “was created in order to give public housing authorities (PHAs) a powerful tool to preserve and improve public housing properties”.

But, according to Blaney, RAD transforms public housing into “Section 8” which removes all the protections that come with the designation of “public housing” i.e. “a resident-elected advisory council, mixed immigration status residents and not being able to sell it off.” RAD’s Section 8 means “no resident-elected body, you can’t be undocumented[…] and [the Housing Authority] can leverage that and sell that off to private developers.” What Housing Authorities all over the country have been trying to do is privatize public housing, in order to sell the land and/or the buildings to private real estate developers.

In many city centers, rents are going up and contributing to homelessness. When you can’t afford a roof over your head, what do you do? If you have friends or family, maybe they can put you up; a temporary fix that's often stressful for all involved. Or, maybe you end up on the street or you live out of your car. Whatever the solution, unstable housing causes a decrease in quality of life for everyone. Action groups such as Union de Vecinos and Los Angeles Tenants Union are of fundamental importance because they both address and solve the problem. They help preserve an individual’s wellbeing because they help people stay in the place they call home.

When people are engaged in their community, the quality of life increases. When people win battles for housing, they gain experience in civic and political engagement, and are more ready to fight bigger battles. Anyone fighting for broader social change must recognize the importance, both practical and ideological, of the fight for housing.

A rational society would not permit the amount of money one has to spend for housing to be the criterion for access to housing. The right to housing is recognized as a fundamental human right in the UN Declaration of Human Rights from 1948. Affordable homes should be provided for all.

Andrea Iannone is an organizer with Democracy at Work - Los Angeles Action Group. He also translates articles from English to Italian for [email protected]