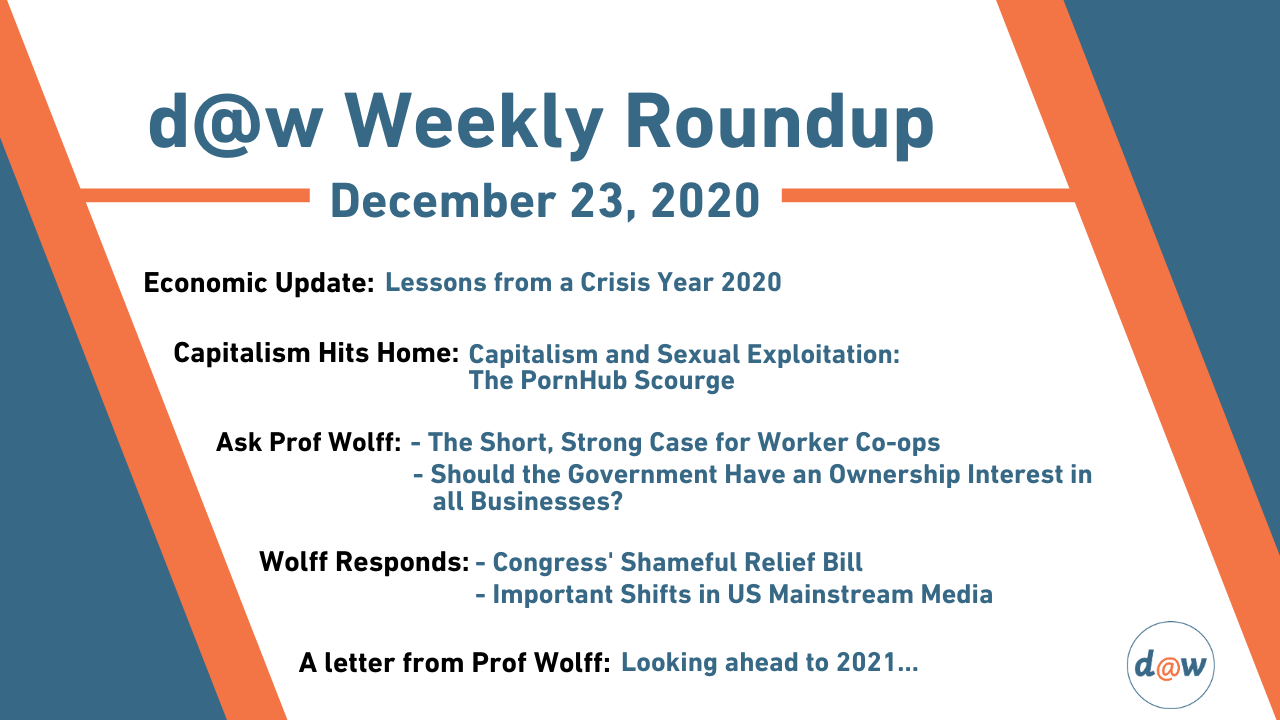 This week's show features a survey of the major economic events of 2020 that were poorly covered by mainstream media: the twin crises of viral pandemic/capitalist crash; protesting right-wing regimes (France, US, India, Poland); how the US Census Survey reveals the extent of US suffering; how Federal Reserve policies, intended to combat Covid-19 and economic crash, worsened income/wealth inequality; and the correction of poor unemployment data during a massive jobless crisis.

Wolff: “33% of households say they are having a hard time covering basic expenses of the household. 33% (same percentage) expect one or more household members either to lose a job, or to have fewer hours, or a pay cut over the next month or two. 33% (again the same percentage) expect to be evicted in the next 60 days... It's almost as if the whole Covid and economic crash are a process of lowering the expectations and the standards of living of the majority of the American people."

Harriet: "We have a puritanical lobby most American children learn about sex from pornography, which is sexploitation. It's an exploitation of sex to make money... We have a sexually deprived culture where children don't learn that sex is a part of life. So instead it's a shamed need"

A Patron of Economic Update asks: "I am interested in learning about worker co-ops and I want to know what are some of the problems that worker co-ops aim to fix and are there any ways that it can be more efficient or profitable than a capitalist owned business?"

Wolff: “Why would the worker co-op be more efficient? The answer is simple and very old. If workers own and operate and run the enterprise they have a commitment to it, a feeling for it, a loyalty toward it, that you will never get from employees who are told what to do…  A worker who's an employee has to worry if there's a new technology, a new more efficient way of doing something, if he or she brings it to the boss's attention they will do it and then fire the worker… Worker co-ops are the end of monarchy inside the enterprise. So if you like democracy, if you believe in democracy, then you ought to be interested in worker co-ops because they're the way to bring democracy inside the workplace. Capitalism has always and by principle excluded it.”

AskProfWolff: Should the Government Have an Ownership Interest in all Businesses?

A Patron of Economic Update asks: "What do you think the impact on Americans lives would be if a government investment fund owned a set portion of every company registered in the US?"

Wolff: “In a more general way of speaking, economics has developed the notion of stakeholders: all the people who have some stake in what a business does. And the idea is if you are affected by business decisions then you are a stakeholder… So, yes I think it's a step in the direction to give the government an interest, one way or another, in the decision making: ownership or other ways. Stakeholders deserve that. It's long overdue. The monopoly of power of the employer is as detestable for a democrat (with a small d) as kings were.”

Prof Wolff reacts to the new relief bill just passed by the US congress. He says that this bill, pushed by the Republicans and accepted by the Democratic establishment, is an awful betrayal of a huge number of Americans who are suffering because of this system's level of greed for the few.

Wolff: “The lame excuse of Republicans and Democrats alike that ‘something is better than nothing’ forgets the humiliation all of this entails, the desperate anxiety about losing your home, having no job, having no job to look forward to, no place in this world, explaining all that to your elderly to your children… Let's assume 10 million are the numbers facing eviction. It's at least that 25 billion divided among 10 million that's about 2500 per household these are households that have not paid rent in some cases for seven or eight months… By giving [the unemployed] only three hundred dollars [a week] you know what you're doing even though you haven't got the courage to say? You're trying to make the 22 million Americans on unemployment get little enough that they will be desperate enough to take any job no matter how low pay. This is the employers, pushing the envelope for more profits.”

In this Wolff Responds, Prof Wolff comments on changes in American mainstream media, comparing the small margin for diversity of opinion when he was younger, to the much wider range of perspectives available today. Specifically, he talks about the fact that CNN overtook FOX news in terms of audience size, compares the media in the US to that of France, and discusses how the internet has opened the door for people to both produce and find news online. All in all, he welcomes the diversity of opinions, and encourages us to make use of it to challenge and strengthen our own opinions.

Wolff: “Gone are the days that I grew up in, here in the United States when we basically had three or four radio and TV networks, one or two newspapers and they basically had the same line on most events. Variations were minor and small…[Now] I see a wide opening, a diversification of perspectives… There are different ways of looking at the world. It’s perfectly reasonable for you to find some more persuasive than others and wonder why you do. But to designate the ones you like as the truth and what everybody else likes as falsity, that's a very dangerous path to go down. So I welcome that we have a very great diversity now.”

A letter from Professor Richard D. Wolff, to supporters of [email protected], reflecting on 2020 and looking ahead to 2021...

Wolff: "Not surprising – except in its speed and volume – the audience for the critique of the system and the advocacy of a basic democratic alternative has grown over this year. And Democracy at Work has grown with it."

We are taking some time off over the holiday season, so we will have less content for you at the end of the year. Here are the shows you can look forward to before we start 2021.