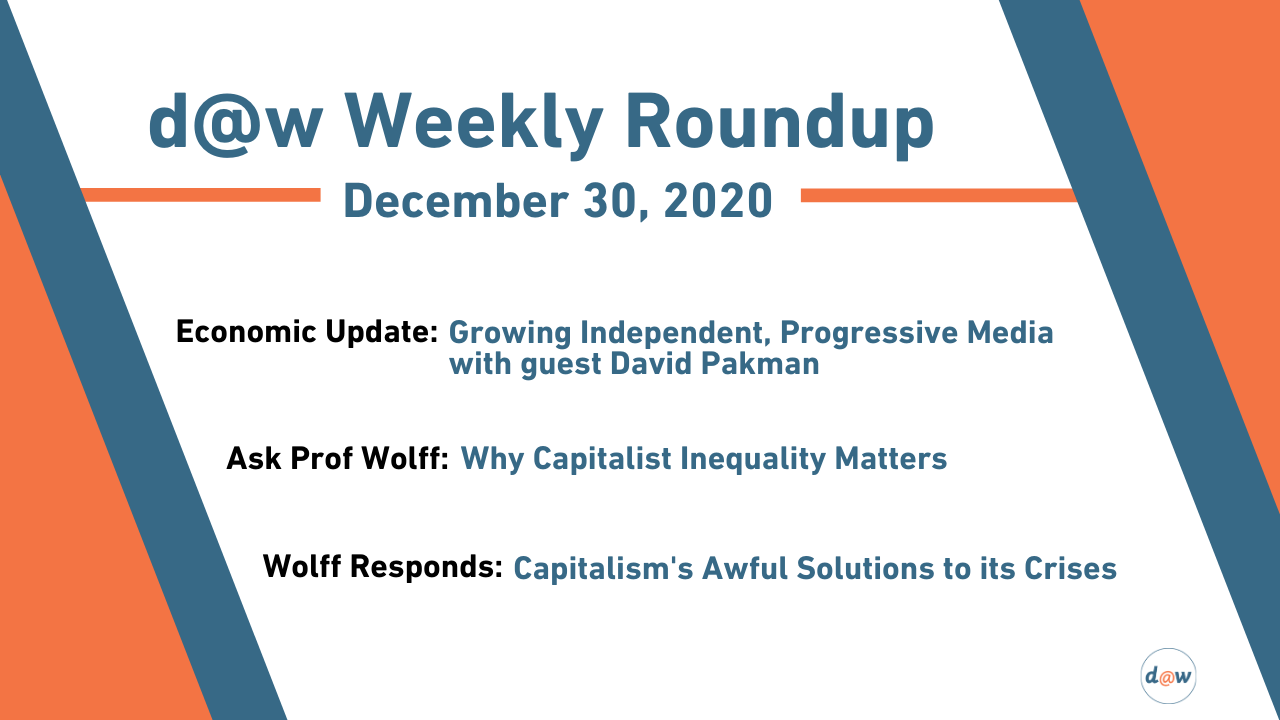 It's a light week due to the holidays, but here is what we published over the last week.

This week's show features updates on the continuing lessons from 2020 at the year's end: the economics of US policing and the 'defund' campaign, building a Cold War against China, and lessons from the 2020 election about political monopoly. In the second half, Professor Wolff interviews David Pakman about growing independent progressive media.

Wolff: "There's no one-to-one relationship with the money going to cops and what is happening in the streets, or in the criminal phase or aspects of our society...  In the most recent year for which we have statistics, the total amount of money spent on policing in the United States was $115 billion.  115. Let me compare over the same period, how much money was given to the CDC, the Center for Disease Control? $11 billion. How many people were killed in the United States by murder, criminal murder? Under 20,000. How many people have died this year already from the [Covid-19] disease? 300,000. What are we doing? What are we doing spending the amount of money we're spending on policing relative to the amount of money we're spending to deal with something much more dangerous to us, namely this pandemic."

…
Pakman: "I think you see that in the data in terms of people's sort of general perception of terms like 'socialism' in the United States, a much much less disfavorable, much more favorable. And it opens up the possibility of a spectrum of critiques of the system: critiques like you do, critiques like I do, and others... [But] the ease with which the connection between Biden and Soviet-style governance, or Venezuela, was made and stuck for a lot of people shows me that while there is progress it's certainly happening slowly."

A Patron of Economic Update asks: "My dad is very conservative and when I said that capitalism promotes too much inequality he responded 'I don’t care. Inequality doesn’t matter.' I’m wondering if you have a response besides the morality of inequality and a way to convince someone inequality is bad economically."

Wolff: “Inequality measures how much of the wealth of society is in the hands of a few relative to the many, the more wealth is in the hands of the few the less the many can buy and that is a problem for capitalism and always has been…  With inequality getting worse there is a growing likelihood that the mass of people being denied wealth are going to become angry, bitter, resentful. So, for example, if we use our majority voting power we can tax the rich and shift the assets to everybody else we can put limits on prices limits on interest rates control the market control the economy in ways that will achieve less inequality… Rich people know this story and so what they must do, and do do, is as they become more unequal they buy the political system… So if you like democratic politics then you'll pay a lot of attention to inequality. It matters fundamentally.”

Responding to the statistic that 42% of American households report that their income in December of 2020 was lower than before the Covid crisis hit in February and March, Prof Wolff argues that true recovery for the majority of people won’t be possible in a capitalist system. He says the conservative tactic is to shift the cost of getting back on track onto the working class. Liberal alternative isn’t that different, mostly softening the blow to the working class while continuing to leave the private capitalists to decide to revive the economy.

Wolff: “However long it takes, six months, 12, 18, 24, eventually wages will go down far enough for the desperate unemployed, and the costs and prices of second-hand tools and equipment [from closed businesses] will go down enough that some capitalists will see a profit opportunity. That's right. They'll see that they can make money now... A system that holds the vast majority (employees) hostage to the desires and actions of a small minority (driven not by the public welfare but by the private profit they can earn), that's capitalism. And that's how we're getting through this crisis… The best solution is neither the conservative nor the liberal it's to get out of a system that plunges us into this absurd irrational downturn every four to seven years. Of course we can do better than capitalism”