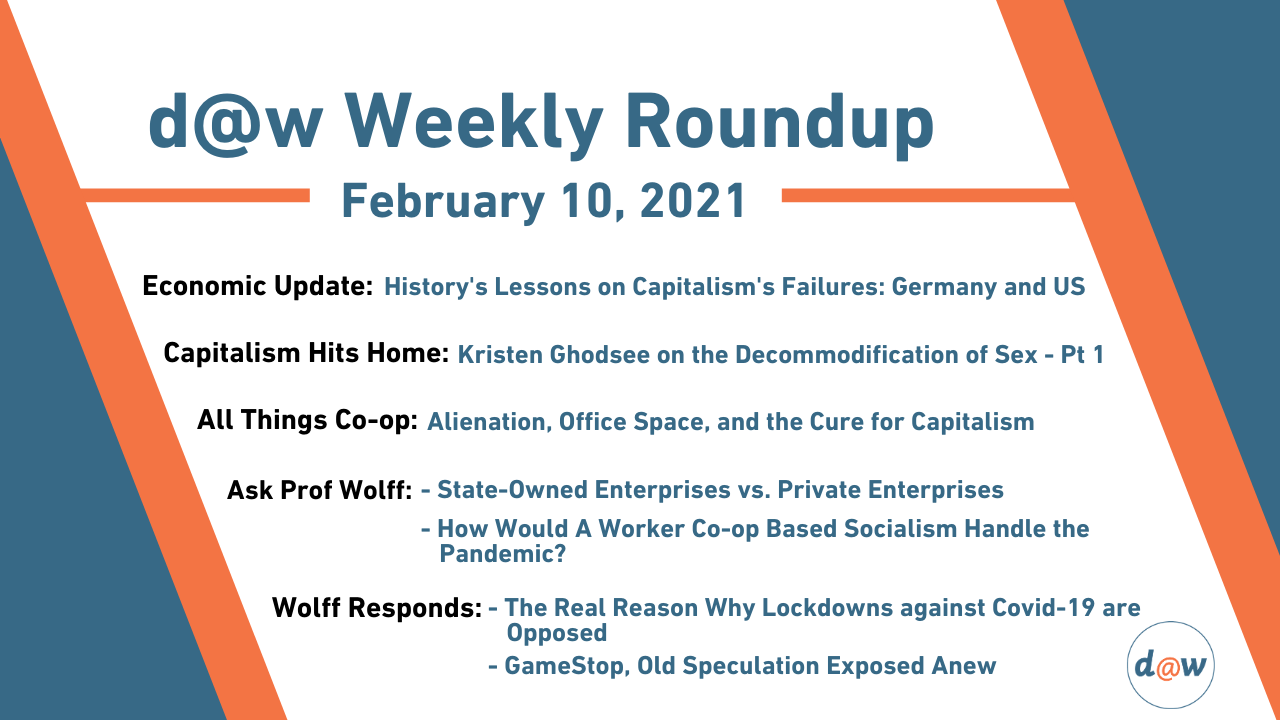 Economic Update: History's Lessons on Capitalism's Failures: Germany and US

On this week's show, Prof. Wolff evaluates capitalism by how it deals with Covid-19 and talks about Boeing's latest fatal crash. The second half of the show is dedicated to a major discussion of the causes of Hitler in Germany as offering clues to the rise of Trump and the assault on the Capitol.

Wolff: "And part of the settlement was the agreement of Boeing to the following: that Boeing lied to the United States government and "put profit before candor." Now this is a very nice way of saying that they are paying a penalty because they lied."

On this week's show, Dr. Fraad and Prof. Forlano talk with author and Professor Kristen Ghodsee about the interdependence of women's sexual relationships, fertility and motherhood to their economic independence. This is part 1 of 2.

Guest Kristen Ghodsee: "The [Eastern European socialist] governments took it upon themselves to provide for women so that they could combine their reproductive roles with their productive roles in the labor force... In fact if you go back to 1990-91 you look at the reunification negotiations between East and West Germany the entire reunification process almost collapsed over the issue of abortion because the East Germans had a much, much more liberal law than the West Germans. And still to this day actually the now reunified German abortion law is stricter than it was before.... Fertility is very much related to the economic system. And one of the things that socialist governments tried to do was allow women the ability to combine motherhood and careers in a way that we've never really committed to in the West."

All Things Co-op: Alienation, Office Space, and the Cure for Capitalism

Work sucks. But why? Why do we all long for happy hour after work ends? In this episode of the All Things Coop podcast, Larry, Cinar, and Kevin sit down to talk about the theory and lived reality of alienation through the black comedy "Office Space." They discuss the consequences of alienation in wider society and how Worker Self Directed Enterprises may be the cure to this pervasive problem. You don’t hate Mondays, you hate capitalism.

Kevin: “Alienation is a deep philosophical topic. You could go very much into the weeds about this. But I don’t think you need to. I think you just need to go to work. When you’ve got a case of the Mondays, you know it’s not because of your job, it’s because of capitalism because it alienates your labor. You know what alienation is. You don’t need to read a philosophical text about it.”

A patron of Economic Update asks: "I would like to ask you if you can talk a little bit about the efficiency of state owned enterprises. my teacher has told me that "there is consistent evidence that state owned enterprises have higher production costs than private for profit enterprises." Is it true? I would like to see you debunking once for all this argument that public programs are inefficient. Italian public discourse is filled with this kind of prejudices."
This is Professor Richard Wolff's video response.

Wolff: “Here's my judgment based on work I have done looking at both kinds of enterprises and the answer may be troubling to you but it's what I found: it's not very important whether the enterprise is privately owned or state-owned. It's much more of a mixed story than the ideological combatants would like to believe or would like us to believe. It's a fake issue. In all enterprises efforts are made for all kinds of reasons to economize, to get more with less effort, to get more with wasting less material, to get more with using more less energy and so on. Human beings in all enterprises seek to lighten their load, to be more effective. Most systems, both private and state, reward enterprises that economize on costs… And you have to look at the whole complex society to see the ways in which it does, or does not, enhance the efforts millions of people make… Much more important than whether an industry is state-owned or private owned would be the question are the workers given a sense that it's their enterprise do they have a sense of owning it, running it, being responsible for it, or are they looked upon as drones?… Those questions end up having a bigger impact on efficiency than the question of whether the boss is a state official or a private citizen.

AskProfWolff: How Would A Worker Co-op Based Socialism Handle the Pandemic?

A patron of Economic Update asks: "How would a stateless socialist society have handled the pandemic? Assuming that worker co-ops comprise the majority of businesses and institutions."
This is Professor Richard Wolff's video response.

Wolff: “I don't want to advocate for [an economic system based on democratic worker cooperatives] by pretending that it will not have its own problems, that it will solve everything that goes wrong in capitalism. I don't believe that. I believe it's a better system. I believe we would be better off living with it. But I don't think it would not have its own problems, its own contradictions, its own issues… All enterprises that are worker co-ops democratically decide what to do with their net output. The net revenue in a capitalist system accrues to the employer and the employer decides what to do with it which usually means distributing it to the people at the top…  Our capitalist system failed to be prepared and failed to contain [the virus] and one of the reasons was how we allocated the net revenues, the wealth being created by our system. A worker co-op society would know to behave differently…”

Wolff Responds: The Real Reason Why Lockdowns against Covid-19 are Opposed

In this Wolff Responds, Prof. Wolff explains why the US has resisted lockdowns despite evidence that demonstrates they are an effective strategy in the fight against the spread of the Coronavirus.

Wolff: “I want to talk about the so-called controversy between lockdowns as a strategy to deal with Covid-19 and personal freedom. I think this is 100% a phony issue… The problem with lockdowns is that they hurt businesses… So here's the solution: by all means lock down it works. It's what's necessary. But you have to compensate the people who lose their income, the wage earners, the salary earners and perhaps also the employers… And how would you do that? The answer is simple: you go to where the accumulated wealth is… The opposition is we don't accumulate wealth in a rational equitable appropriate way. We allow some people to have absurd amounts of personal accumulated wealth. So if we're going to do what every community needs to do to save itself, we have to go and get the wealth from where it is, and that's in the hands of a tiny part of our population… They don't want to give up a nickel and so they have to invent another argument: it infringes on our freedom.”

In this Wolff Responds, Prof. Wolff comments on the recent GameStop fiasco.

Wolff: “The only new thing would be the participation of smaller players in the stock market in a way that used to be reserved for the big boys, and only a small tiny slice of the general public was involved because they have the time and the connections and the disposable cash to play some of these games. So, the notion of a democratization is far-fetched and irrelevant basically to what's going on. This is speculation. This kind of speculation is as old as markets… In other words the price of something in a market doesn't reflect in any automatic or necessary way what it costs to produce it. It reflects in part what the cost is but it also reflects all the shenanigans, all the hustling, all the lying, all the public relations that all the players involved can be doing…  The market is a complicated institution, it is not under control, it is not some wonderful measure of efficiency, it isn't even a measure of what in the world is going on in an economy. You've all seen that over the last year…”

Webinar: Why Worker Co-ops Should Matter to Labor Unions

invite you to attend a Zoom webinar:

Why Worker Co-ops Should Matter to Labor Unions