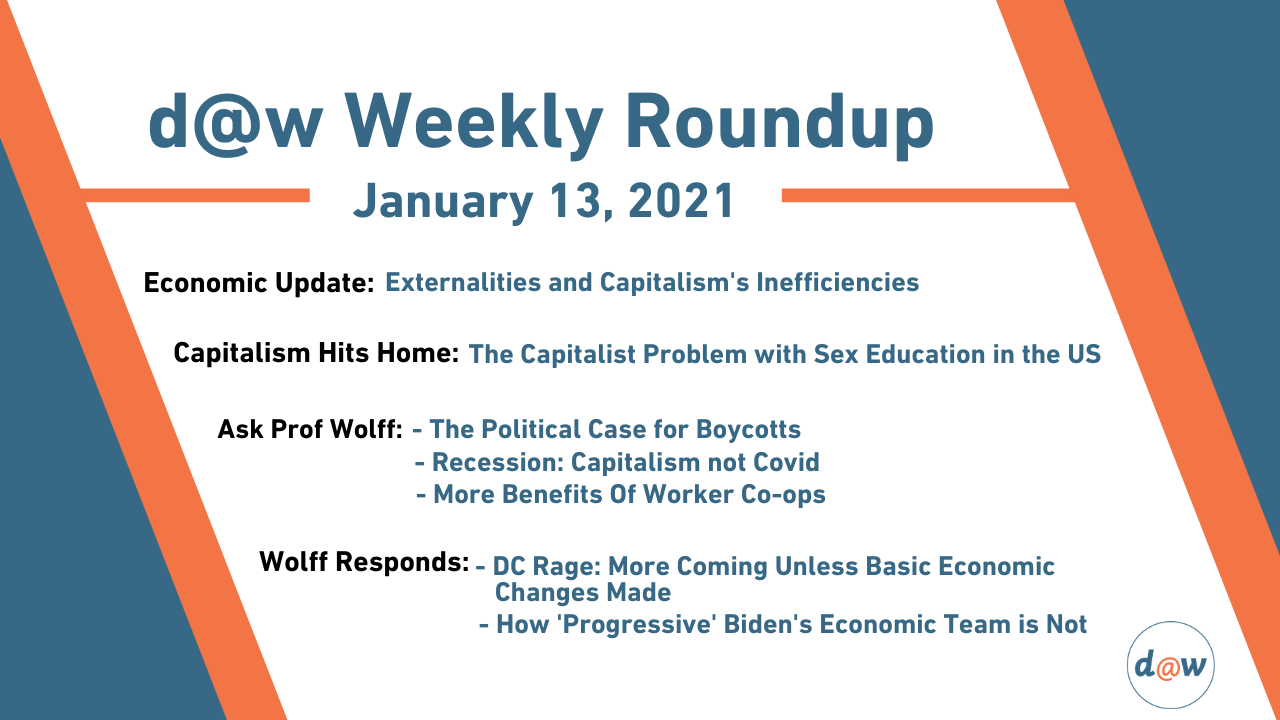 This program introduces the economic concept of "externalities." Those are the real costs of employers' business decisions that employers do not pay for or take into account: costs "external" to businesses' profit/loss calculations. Examples include costly damage to the environment, to employees' private lives, etc. Those real social costs are external and additional to capitalists' private costs. Therefore, capitalists' investment decisions based on comparing costs and revenues do NOT take into account the real, external costs. Thus their decisions are not "efficient." Capitalism never was the efficient system its apologists claim.

Wolff: "All that "externalities" refers to are the costs of capitalist activities that capitalists don't have to count. The way it's handled in economics is there's a distinction between private costs and social costs... Now, there is a way that most people kind of get that these days, even if they're not familiar with the concept. It has to do with environmentalism... Capitalism isn't efficient and it never was because it fails to count the social costs. It only counts the private costs and those are never all of the costs."

Capitalism Hits Home: The Capitalist Problem with Sex Education in the US

This is part 2 of a 4-part series on the intersection of sex and capitalism. On this episode of Capitalism Hits Home, Dr. Fraad and Prof. Forlano discuss how sex education under US capitalism is failing our kids and undermining our society.

Forlano: "It seems like consent and what consent is is something that should be covered by a sane society sex education curriculum. Yet, at least in my day, that was considered progressive to actually show a banana with a condom on it."

Fraad: "That's true. But we only teach the plumbing, if at all. And that's in only 17 states that have accurate descriptions. We don't teach sex as relationship, as love, as joy, as mutuality. And therefore people are filled with shame. Rape is a vehicle of shame."

AskProfWolff: The Political Case for Boycotts

A Patron of Economic Update asks: "I have been trying for many years and many times to get someone noteworthy to discuss the subject of boycotting. Why are there not "any'' efforts to organize nationwide citizen boycotts of major corporations and other entities of power? It is like the word boycott has been banned from language. Boycotting, if done right, could be the most powerful tool we have to control the elites. Even more powerful than voting. Why? Because you get them where it all counts, their money. Yes it hurts us, the people, we suffer under boycotts if done seriously. But who thinks we are going to get out of this mess without pain? What's up? Why has the word boycott been boycotted?"

Wolff: “The notion that you use the market to wage a political campaign is an old idea and is certainly one that ought to be one of those in the arsenal of the people who want to make changes in society… If the market is affirmed as the greatest creation of the human community (which in right-wing capitalist societies it is) then there's almost an invitation to use the market to try to correct the inequalities the instabilities that come, among other things, from markets… A boycott is effective to the extent it is a collective action, shared in by sizable numbers of people. And that's the organizational problem of the left of the United States.”

Wolff: “[The pandemic and economic crash] are separate, and that neither is the cause of the other… The National Bureau of Economic Research [says the economic crash] began in February, and every report I know of says that the pandemic the virus hit this country in March… This capitalist system experiences something that came to be called the business cycle. It came to be called that over the last 300 years because wherever capitalism has settled in as the economic system  it has had a crash, a downturn, a bust, a recession, a depression (you get the picture) every four to seven years on average… So to think that we have a crash because we have a once in a century terrible pandemic is without merit. We had the last terrible virus in this country in 1918, literally a century ago, and we have one now. Between those we had many many crashes. Viruses don't cause crashes… The “subprime mortgage crisis in 2008” or “the dot-com crisis in 2000” that's a none too clever way to try to say the crisis is somehow the fault of those specific events. It isn't. It wasn't.”

A Patron of Economic Update asks: "In the capitalist model workers are given incentives like bonuses, stock options, etc for above & beyond performance, incentives which don't have a good track record of benefiting workers as they promise. Worker co-ops offer much better equity, but also improve efficiency and product quality. I know you've mentioned some, but what are some other benefits of worker co-ops to workers and society at large?"

Wolff: “We complain that millions of people in modern democratic societies don't vote, don't follow politics, really disengage from running the community. Well, one of the reasons (not the only one but one of the big reasons) that happens is the workplace is so undemocratic. You lose your appetite, your taste for democracy. Your commitment to democracy is underdeveloped. You want democracy politically? You have to institute it in the economy too.”

In the Wolff Responds, Prof. Wolff talks about the recent events in Washington, DC and explains what has caused this extreme rage.

Wolff: “When you're angry and you've woken up after being asleep and not paying too much attention to the problems accumulating around you, you're an easy mark for right-wing politicians who can say what you want to hear and get you to support them... Are people a little bit crazy? Yes. They've been under too much pressure; decades of being overworked, and underpaid, and over-indebted, and under-appreciated take their toll. And by the way, they will continue to do so unless basic changes happen in this country, changes far beyond anything that the establishment of the Democratic Party and especially Joe Biden have ever endorsed, discussed, or initiated.”

Wolff Responds: How 'Progressive' Biden's Economic Team is Not

Prof Wolff comments on some of the selections of Biden's cabinet that are being labeled as "progressive," specifically Janet Yellen, Jared Bernstein, and Heather Boushey. He says they know something about the fundamental problems and flaws of American capitalism, but are ideologically  blinded to the solution. He says they are good people, well-intentioned, but they long ago accepted the rules of what can and cannot be said, what can and cannot be done policy wise, and they love being "realistic." He believes their policies will take some of the edge off of the many painful aspects of capitalism, but will not address root causes.

Wolff: "If you want to do something about burgeoning inequality, don't nip around at the edges."