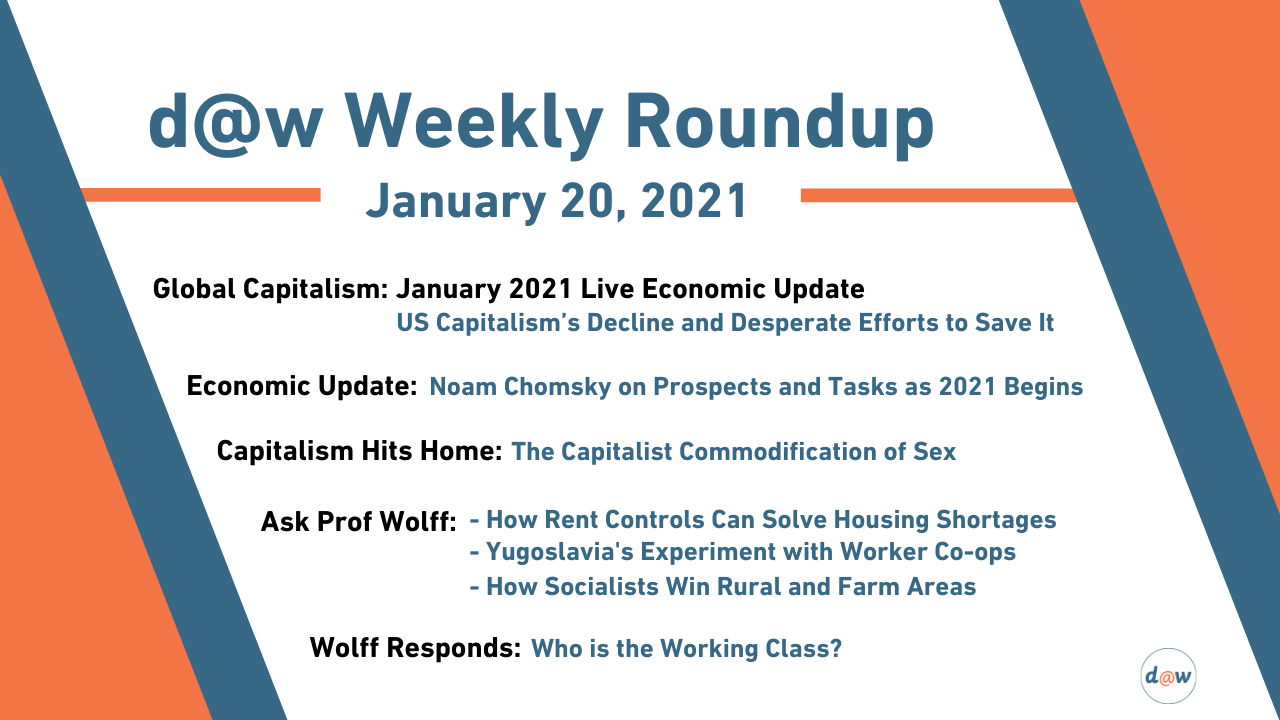 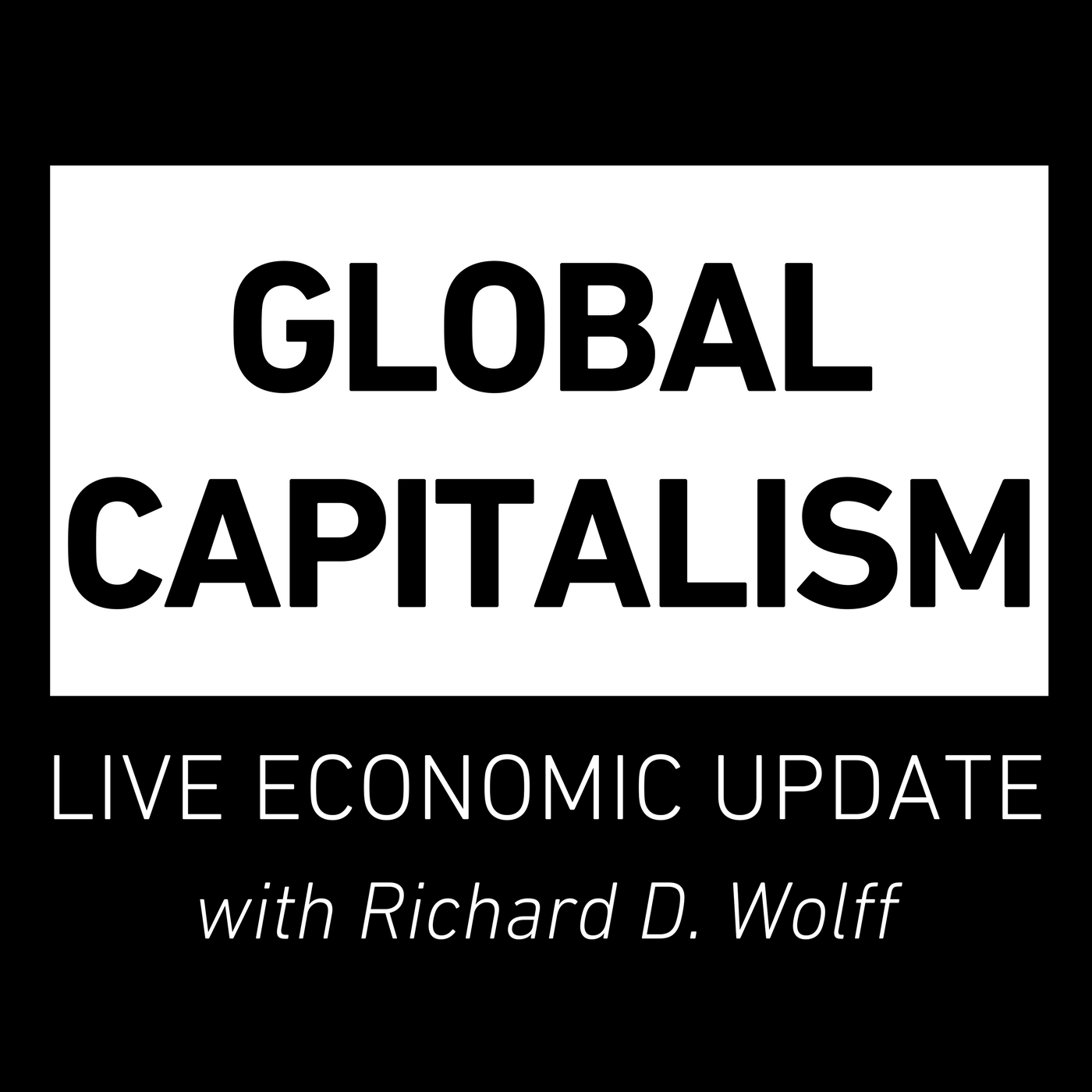 Global Capitalism Live Economic Update, January 2021: US Capitalism’s Decline and Desperate Efforts to Save It

In connection with Prof. Wolff’s discussion of the main topic above, he will also give short updates on: the US military intervention in elections; the economics of advertising; Trump’s political crash and lastly, Biden’s Economic “Team.”

Wolff: “Not wearing a mask is craziness. Climbing up the capitals wall, that's craziness too. But it would be a terrible mistake to give it some abstract theoretical explanation without understanding its roots in genuine real lived experience… The Biden administration wants to go back to the pre-Trump normal. The pre-Trump normal is how we got to Trump. You are creating the process that will deliver to us the next Trump whether his name is Cruz or Hawley or Trump or Pence… When I say "basic changes" here's what I mean. You've got to do something now to alter and end the absurd and obscene inequality in this society. That's not going to be done by marginal tax rate changes or giving everybody two thousand dollars… In 1923 no one ever heard of Adolf Hitler. He was sitting in a jail in Munich [after storming] a building in downtown Munich, Bavaria as the first step in what was planned to be a takeover of the entire German government. 10 years later, in 1933, he had done the organization [and was head of the German government]. Why? Because the capitalist system of Germany only got worse in the intervening 10 years. So Hitler's base only got larger… There is a lesson if you don't make the basic changes that are causing these social divisions and crises they will get worse.”

Economic Update: Noam Chomsky on Prospects and Tasks as 2021 Begins

This week, Professor Wolff gives updates on President-elect Biden's economic advisor "team", how Argentina's women's movement leads the defeat of the government and Roman Catholic Church oppositions to win legalized abortion and now targets other basic social changes, and how the deepening inequality of US wealth and income cause and reflect the growing gap between stock market prices and the depressed Main street US economy. The second half features an interview with Noam Chomsky on political and economic realities and possibilities facing us in 2021.

Wolff: "So, we have all this money being created... Where does the money go if it doesn't go into producing goods and services since the demand isn't there? It goes into the stock market, where it bids up the price of stocks, which is what the rich people are happy about because it makes them richer still.”
...
Chomsky: "In the 1930s the system had broken down & there were essentially two ways out: fascism [&] social democracy... We're not in 1929, but there are some similarities & it could go either way."

On this week's show, Dr. Fraad and Prof. Forlano present some of the ways that sexual sales operate.The utter failure of America's sex education curriculum removes relationship and humanity from sexuality. Sexual need is hyped for men and forbidden for women. Sex becomes a scarce commodity that women can sell within our gender unequal capitalist society. This is part 3 of a 4 part series on the intersection of sex and capitalism.

Fraad: “And we have to remember that 40% of the high-end sex industry doesn't even involve sex. It just involves holding someone and talking to them... The capitalist culture means use everything as a commodity that you have. Sell it. Brand it. Sell it.”
Forlano: “The coaching industry is basically you knowing how to be a good friend and then you now sell that.”
Fraad: “Exactly. Capitalism reaches its tendrils in every aspect of our lives.”

A patron of Economic Update asks: "Today, my economics teacher was trying to argue that price controls (price ceilings and floors) on landlords somehow creates housing shortages because it widens demand to relatively lower income people. Do you believe his assertion is correct?" This is Professor Richard Wolff's video response.

Wolff: “When the wind is blowing in a certain ideological direction all kinds of silly things can be said which win nods of agreement by people who aren't really listening all that closely to the specific argument. Otherwise they would refute it but they like where it goes where it points what it's part of in terms of an ideological affirmation… There’s an easy fix which many many societies including the United States have found for precisely this situation. If the private sector doesn't invest in housing enough to provide decent housing at manageable rents for the population, number one the government builds, owns and operates housing. That's right. Public housing… Number two you can have the government subsidize communal or collective housing… There is no need whatsoever to fall for what landlords and their spokespersons are telling you. There is no one-way necessity that they be free to charge as much as they want… It's showing that the private way of going about it isn't working real well. So either the landlords have to take it on the chin, earn less so that the mass of people have housing, or else the government has to step in.”

A patron of Economic Update asks: "Tito ruled Yugoslavia with an iron fist for nearly 40 years after WW2. He implemented 'self-management' Socialism and despite some initial success, by the late 80s the entire economy collapsed and soon after the country descended into a bloody civil war. I lived in Croatia from 2005 to 2011 and was surprised by the nostalgia for Tito and Communism. They remembered fondly secure work and cheap housing. They had more freedom than the USSR. You are promoting Worker Democracy. How is that different from Worker Self Management that was tried, tested and ultimately failed in the former Yugoslavia." This is Professor Richard Wolff's video response.

Wolff: “What they called their experiment in Yugoslavia was ‘workers self-management’ and what we push is something somewhat different: ‘workers self-directed enterprises.’ The difference there is in the keywords ‘management’ and ‘directors.’...  Self-management gives workers more power but it is not the same as having the workers in the dominant position of directing the enterprise, being the folks in charge… So what you had in Yugoslavia was a step in that direction. Giving workers their own management is no minor matter. No disrespect is involved here in noting the difference between that and going to the next big step which is the workers being not merely managers but the directors… Second, the government had its own agenda which wasn't always the same or consistent with what the worker self managers and there were tensions between them. Who makes the final decision? The party and the government on the one hand, or the workers in their self-management operations on the other? We have to learn that that kind of tension exists if you have a worker co-op based economy, and that would have to be worked out presumably in a way that respects a certain role for the government but also respects the self-determination of workers self-directed enterprises.”

A patron of Economic Update asks: "I am fascinated about socialist & marxist movements in rural areas, small towns and among farmers. This seems inconceivable in today's climate. Especially when these are normally people who are historically suspicious of government intervention. I am curious as to what kind of socialism did these rural socialist envision? Was it government ownership of land? Land redistribution? Cooperatives? A combination?" This is Professor Richard Wolff's video response.

Wolff: “I would like to underscore that socialists and communists in many countries have on occasion become very powerful and very popular in rural agricultural areas… If you want to build a powerful movement, say you are a socialist or a communist, you quickly discover that the only way to do that is to build a coalition… “

Wolff Responds: Who is the Working Class?

In this Wolff Responds, Prof. Wolff defines for us what he means by "working class" and provides an explanation for his use of the term to explain the uprising on the Capitol on January 6, 2021.

Wolff: “I use the term class in a particular way everybody does but I want to be explicit about how I use that term. Many folks think of class in terms of power:  “ruling class,” “powerful class....” [or] wealth: the “rich,” the “poor,” the “propertied,” the “property-less…” I think there's something missing in those analyses that I want to get at through this other concept of class that I use. You can classify people according to whether they are “employers” [or] “employees…” If you have found my work of interest it's in part because I use this concept of class.
The employer class is extremely small [and] the employer class has to find( if it isn't going to be an armed camp) a portion of the working class, the employees, that they can make into allies… The political success of Trump and the Republicans getting half the vote almost in this last election is because they have figured out how to break away enough of the working class in this country (employees) to keep a hold on power. White supremacists are part of the story, and the horror of that (especially in the history of the United States) is part of the story to understand. No question about it, and I have written and spoken about it at length all my life and in this last year as well. But it is a part of the story. To reduce it to white supremacy would be the equivalent of saying that all the people who voted for Biden are centrist Democrats... We are not going to defeat the capitalist system unless we understand the coalition that has been fashioned to keep it going.”