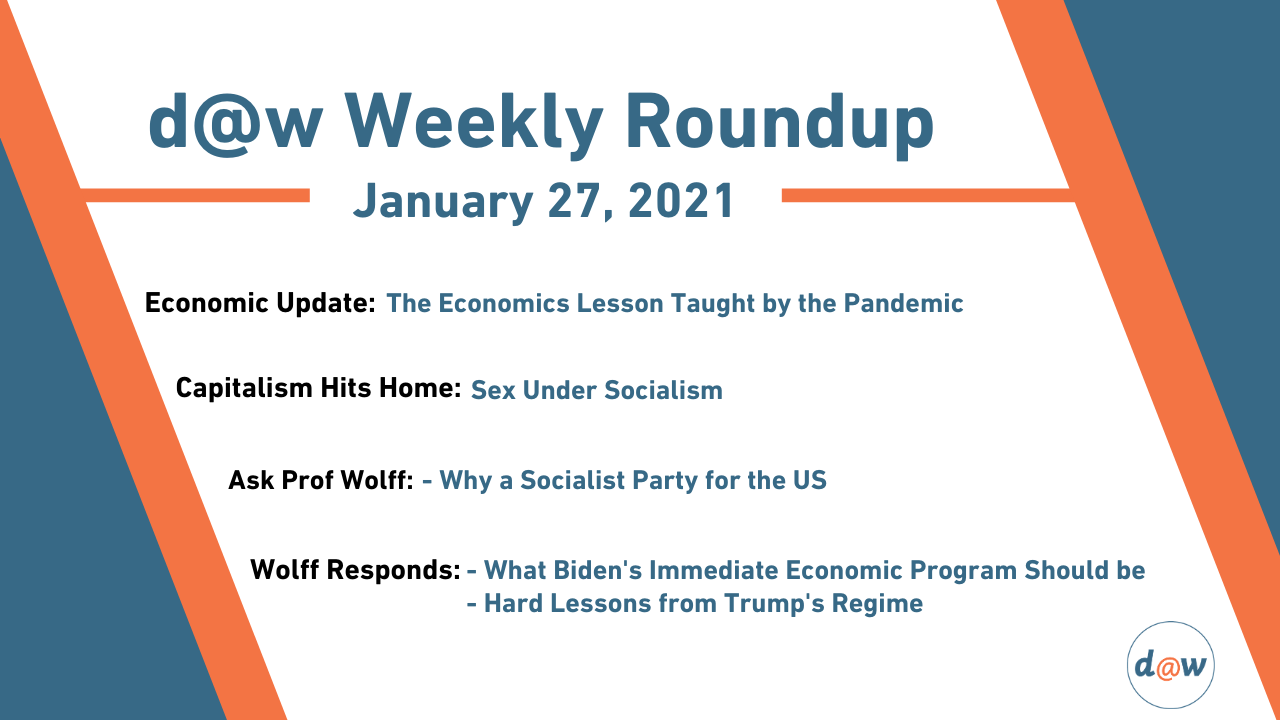 Economic Update: The Economics Lesson Taught by the Pandemic

On this week's show, Professor Wolff explains where the government is respected and empowered, nations have effectively contained the Covid-19 pandemic. He gives examples including New Zealand, Taiwan, South Korea, Cuba, Vietnam, and China. Alternately, where the government is demonized, disrespected, distrusted, the pandemic has been devastating. Examples of this include the UK and the US. Wolff argues that a rational economy includes both less and more government-regulated private enterprises plus state-owned and operated enterprises according to which performs best to meet society's needs. No fundamentalist "either/or" arguments are justified. Finally, he says how private and government enterprises are internally organized - hierarchical or alternatively democratic worker-co-op - is equally important.

Wolff: "The problems of this country are not reducible to [having] more or less state or private [involvement]. That's a way to focus people away from something else that needs change, namely the organization inside the workplace, in terms of who makes the decisions and how the place is run. That too is an enormously important lesson from what the failures to cope with Covid have meant."

On this week's show, part 4 of the 4 part series on the intersection of sex, sexuality and capitalism, Dr. Fraad and Prof. Forlano discuss author Kristen Ghodsee's book "Why Women Have Better Sex Under Socialism" and examine at the differences between sex and relationships under state capitalisms versus socialism.

Fraad: “[After WWI, the Soviet Union needed] more population and in order to go from the most backward country in Europe to a major power. They needed women's workforce participation, and they also needed births. So what they did was they designed an excellent abortion access for those who wanted it but support for women: well-paid maternity leave, early childhood programs, after school programs... They encouraged women to escape from the total burden of domestic responsibility and child care.”

Forlano: “I know a lot of my friends here are like always concerned that if they have an unwanted pregnancy then it's gonna be a big thing. And you know some don't believe in abortion, some do but still don't want to have one, some want to have the kid and then they have economic stress. I think that does actually trickle into people's thoughts in the bedroom... If you're not interested in having kids [you can] have better sex knowing that you're not gonna be making one that day, and that if you do there will be care for it.”

AskProfWolff: Why a Socialist Party for the US

A patron of Economic Update asks: "Noting the success of the third party "Farmer-Labor Party" in securing power in the state of Minnesota, particularity in the 1930s, do you think it is useful and necessary to learn from that movement how to create a successful socialist party in the United States. Given the turbulent moment of that time in history and of our current situation, do you think that a similar force is needed to drag the country (or localities) to the socialism we desperately need?"

Wolff: “Yes we need it, and we would benefit from it… It overcomes all those last 75 years of anti-leftism built into American culture and politics. It overcomes it by reopening this country to an honest open-ended wide-ranging political debate… Americans need to relearn what socialism has to offer to catch up with the discussions about socialism that have been taking place everywhere else in the world… I appreciate what Bernie [Sanders] and Alexandria [Ocasio-Cortez] do within those limits [of the Democratic Party] but I think we ought to also have socialists who are operating openly and politically without those limits. That will empower the socialists inside the Democratic Party.”

Wolff Responds: What Biden's Immediate Economic Program Should be

In this Wolff Responds, Prof. Wolff outlines some of the steps that the new Biden administration should undertaken to turn things around in the US, create jobs for the mass of people who are unemployed and address the pandemic that has resulted in over 400,000 US deaths.

Wolff: “If the basic strategy and goal of the Biden economic program is to get us back to a normal defined as before Trump, then I think we are headed for very hard times [that promises to] reproduce another Trump four years from now… Let me offer the three major immediate steps that the Biden administration could take and should take but does not yet show the courage or commitment to take… (1) We currently have over 20 million people in this country collecting unemployment. If the private sector cannot or will not [hire them] so the government of mr biden should [as FDR did]. The tragedy is not that the Biden administration has decided not to do this, the tragedy is that the Biden administration so far hasn't said a word about it. It's not even debating whether and how to do this… (2) A serious assault on the tax disaster of this country. High incomes are not taxed even as much as they were in the 60s and 70s, and they should be. Property tax (and a stiff one and a progressive one) should be levied on property in the form of tax of stocks and bonds… (3) Reverse the disastrous policies of the Trump administration against China above all, but other countries as well. Get off the conflict track with china. Work out a way that their economy can grow and the United States economy can grow [and] avoid moving towards military disaster.”

In this Wolff Responds, Prof. Wolff underscores the lessons learned from the Trump Administration so as to not repeat the same mistakes again. Wolff argues that capitalism in trouble saves itself by making adjustments, by turning to fascism in an attempt to explain the inequality and crisis, by blaming anything other than capitalism to take the attention off of system change as a solution. Scapegoating was a tactic used by Trump's regime to explain away the decline of American capitalism.

Wolff: “Trump did not bring fascism to the United States. It was fascism in the United States that found Trump… One of the ways that a capitalism in trouble saves itself is by making adjustments to which we give the name fascism: to blame all of the components of the crisis onto something, anything other than the capitalist system to save capitalism… Whatever it may be there are people who are vulnerable to turning their victimization by capitalism into a hostility to other targets that get blamed for their difficulty so that capitalism isn't. When that gets to be very extreme this process of scapegoating others, you have a system called fascism… If Mr. Biden's new administration does not deal with all of the victims of capitalism in the United States today then the anger and the bitterness will continue, and the audience for socialists on the one hand, but likewise for fascists, will grow.”