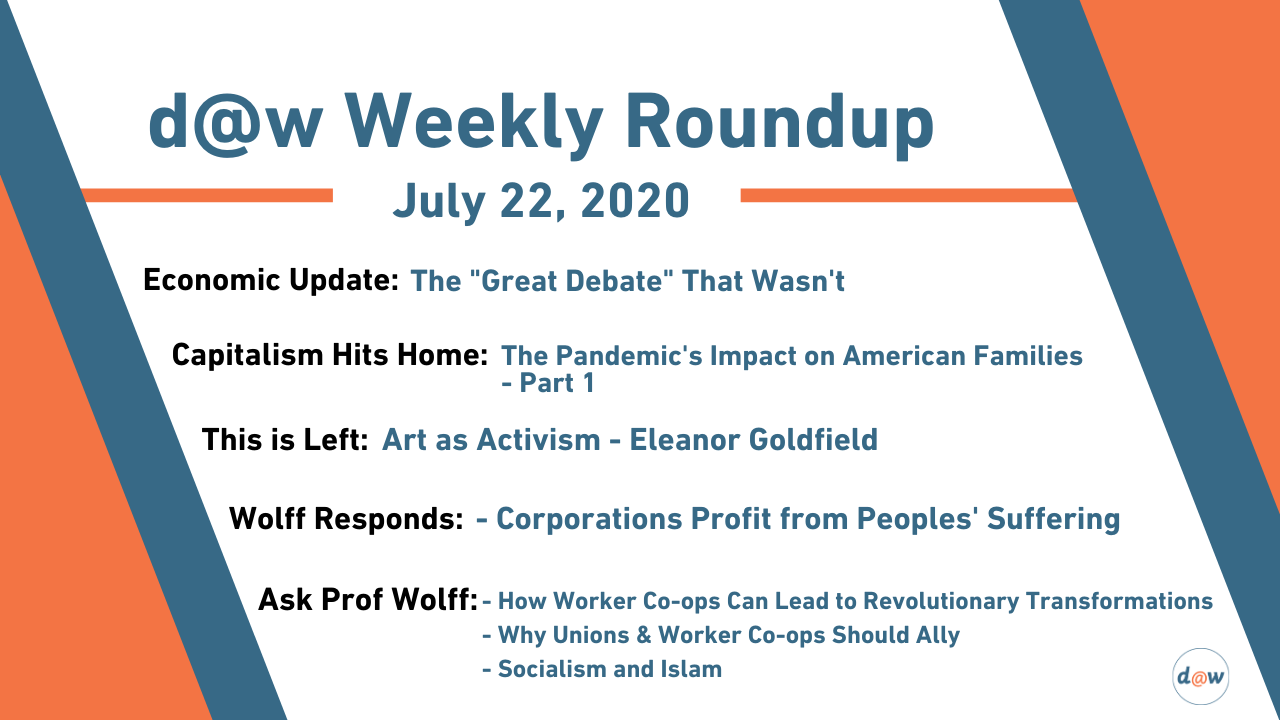 The latest Economic Update tackles the great debate between more or less government intervention, and argues that the debate itself could and should have been about the strengths and weaknesses of capitalism versus those of a real alternative system, socialism.

In Capitalism Hits Home this week, Dr. Harriet Fraad talks about the impact the current pandemic is having on people and families.

A new This is Left video from Eleanor Goldfield addresses art as a form of activism, how we use art to describe what it is to be human, and how we use it to move to change that human experience.

In a Wolff Responds video, Prof Wolff denounces the fact that many corporations are currently making enormous profits off of the mass suffering of others.

“Single men have a particular problem. You can see that in [personal] ads. If you look at personal ads they always used to be that the majority would say things like "Single white male / single black male / Straight / Gay / Whatever … Wants discreet sex in the afternoon, discreet encounters in the afternoon or whatever." Now, they're more like "Need COVID babe. I have a house on the Jersey Shore. It's very safe. Please, come live with me. Be my COVID babe." There were quite a few COVID babe inquiries, because it's very lonely to be alone. And it's even more lonely for men than it is for women because men are not used to calling each other and telling each other how they feel.”

This is Left: Art as Activism - Eleanor Goldfield

“Art is both fight and a salve. It's the soul and the pulse of our movements. Our art is how you describe what it is to be human. Art is what removes us from the rigid confines of capitalism that invites us to think outside of that box, outside of their box. Why is that box even there? Who put it there? What does the box say about how I relate to myself and to others?”

AskProfWolff: How Worker Co-ops Can Lead to Revolutionary Transformations

“I don't think labor unions need to wait for dire conditions like in Seattle in 1919 and they don't have to wait until a general strike is a weapon that they use. They could - and they should - do it all the time.”

“There are strong arguments in [Islamic, Christian, and other religious] literature in the tradition against charging interest for loans... In a sense it was an argument that was fundamentally ethical and moral. It said that the only reason more or less that a person or institution borrows money is if they are in need. And if they are in need it is the appropriate human task of others who are not in need to help out to help those who are in need.”