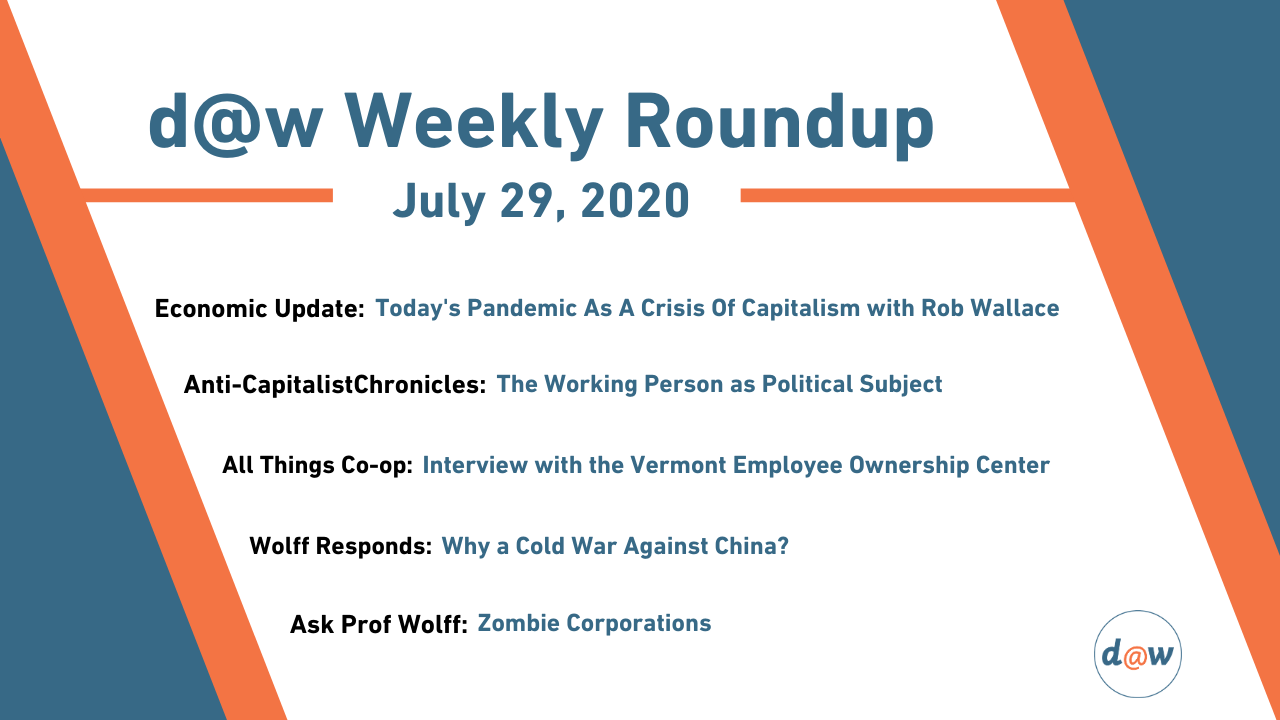 The latest Economic Update talks about companies shrinking product size but not the price, health insurer record profits during the pandemic, and features an interview with epidemiologist Rob Wallace on capitalist agriculture & viral pandemics, & more.

The last episode of Season 2 of Anti-Capitalist Chronicles tackles understanding how political consciousness is shaped in working people.

A new All Things Co-op features an interview with Matt Cropp, Co-Executive Director of the Vermont Employee Ownership Center and who has extensive experience in cooperative conversions.

Zombie corporations are explained in a new Ask Prof Wolff: what they are, how they become zombified, and what they indicate about our economic system today.

Prof Wolff’s latest Wolff Responds video addresses the growing cold war with China. How and why is this developing in the way it is?

Economic Update: Today's Pandemic As A Crisis Of Capitalism

"We're fighting a disease that's killing us and the health insurer is making record profits... If you want an example of capitalism's incentives producing perverse results, there it is." - Richard Wolff
"Because on the one hand the political class is on the hook for making sure these outbreaks don't happen, but it is also on the hook to  help those companies in agriculture and in other sectors [that] help, in essence, bring the outbreaks in the first place." - Rob Wallace, epidemiologist and author

All Things Co-op: Interview with the Vermont Employee Ownership Center

Matt Cropp, Co-Executive Director of VEOC: “This is a long game, right? Cooperativism itself is an intergenerational project where the tools we have to work with only exist because people who are long dead put a lot of time and effort into building a foundation. [The interest we’re seeing now is] a combination of some boiling up factors that definitely push things, like the fact we have a high unemployment rate. There's definitely contingent factors that are of the current crisis. But a lot of stuff has been a slow burn, a slow go, that we're seeing the fruits of.”

“Close to one out of five capitalist corporations in america is a zombie corporation...the zombie corporation is getting itself deeper and deeper into debt because it borrows since it can't pay off its old debt and thereby becomes more of a zombie… The way capitalism was supposed to work was this if a company could not cover its expenses which include whatever debt it went into then that was a sign that maybe that company should go out of business… Zombie corporations are a credit bubble being sustained now by the government because of the desperate borrowing.”

Wolff Responds: Why a Cold War Against China?

“China is being reexamined and repositioned in the American consciousness to accommodate fundamental economic and military needs that this troubled capitalism now faces...In an economy that is dependent on the military-industrial complex that Eisenhower, no less, warned us about, we should never underestimate the role played in our foreign policy by the need of an enemy to justify the vast expenditure on the military (over 750 billion dollars this year alone).”