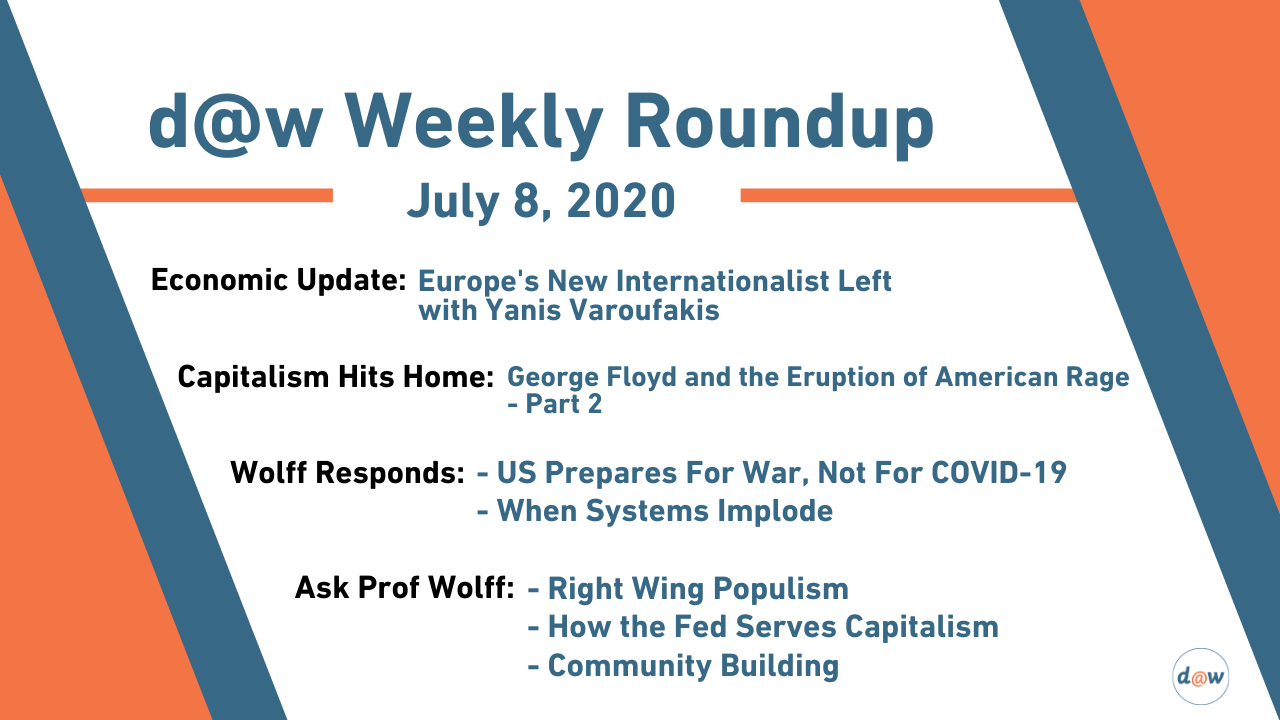 In the latest Economic Update “Europe's New Internationalist Left,” Prof. Wolff presents updates on "zombie" companies and their rapid growth in the US, The Federal Reserve "stress tests" expose risks, and weaknesses of major US banks. On the second half of the show, Prof. Wolff is joined by Greek economist, academic, philosopher and politician, Yanis Varoufakis on DiEM25, Europe's new internationalist left.

In part 2 of Capitalism Hits Home episode “George Floyd and the Eruption of American Rage,” Dr Fraad argues that we now have a moment to make class change, and that we cannot let this moment be used for a bit of police reform that allows capitalist class/race/gender exploitation to continue.

In a recent Ask Prof Wolff on right wing populism, Wolff argues that one cannot expect people who have had a lifetime of indoctrination that anything relating to socialism is evil to move to the left when they are suffering and looking for answers. It’s easier, more comfortable to go to the left. In another video, he also explains how the Federal Reserve serves capitalism and while it has influence on the system it does not have control of it. Finally, he answers how to build community in a temporary and transient capitalist society: limit the power of corporations.

In a Wolff Responds video, Prof Wolff addressed the disparity between preparation of the medical field for a virus like COVID-19, versus the military preparation in the defense field for a military conflict. In another video, he argues that four problems (climate change, economic crashes, systemic racism, and failing health systems) are converging to create a system implosion.

Economic Update: Europe's New Internationalist Left
Wolff: You have a corporate sector that is becoming zombified and banks without enough backstopping of their own capital to cover the failing corporations. You are in the late stages of economic disintegration...

Varoufakis: In 2008 was a bubble in the financial sector. Today's [crash] is the whole of the corporate sector. The whole of corporate capitalism is deflating as we speak. And the powers that be here in Europe, and I'm sure the United States as well, are not wasting this fantastic opportunity for them to intensify the class war against the weak.

Capitalism Hits Home: George Floyd and the Eruption of American Rage - Part 2
"Black lives matter, fight for $15/hr, the climate movement, the MeToo movement. They're all movements that say we're not going to be ashamed to be poor, sexually molested, black. We're going to say shame on you for exploiting us, using us, for acting like it's our inadequacies that were used, rather than your predation."

AskProfWolff: Right Wing Populism
“I have to say it's easier to go to the right. The right has always been much more comfortable for American society to deal with than the left. And that's partly because it's easier for the people who run this society to accommodate the right wing than it is to accommodate the left. And the right wing knows that, so it's very careful not to attack capitalism.”

AskProfWolff: Community Building
“If you want community, you're going to have to limit the power of corporations… It’s either your freedom to have to build and be a part of communities or it's the corporate business’ freedom to disregard your need and interest in community to disregard what impact it has on the broader society.”

Wolff Responds: US Prepares For War, Not For COVID-19
“We have a medical system limited and constrained by a private capitalist system that dominates and that does not permit or allow the government to do for the medical preparedness what it does regularly for military preparedness. Is it crazy to have a system like this? You bet.”

Wolff Responds: When Systems Implode
“I want to go through the four with you and then make the case that these four problems - or rather the unsolved nature of these four problems - is now converging, coming together, hitting us all at once and therefore throwing the system itself into question... Climate change… Economic crashes... Systemic racism… Health…”