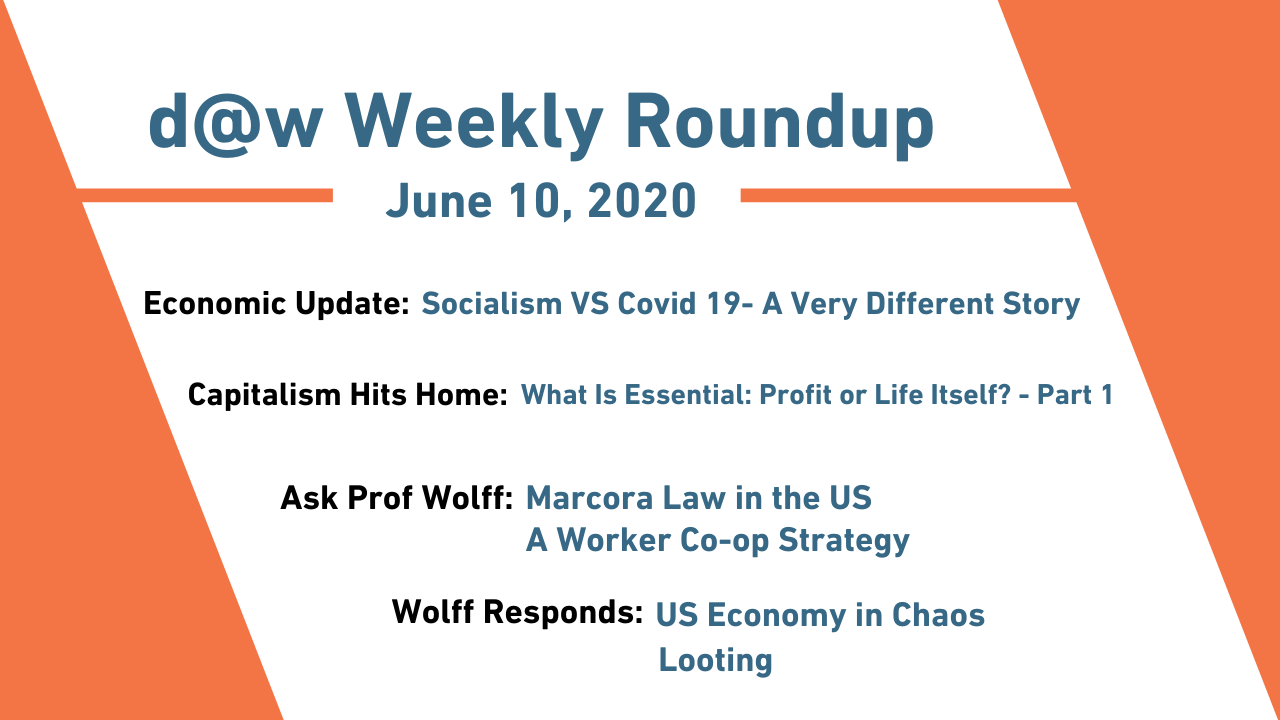 Last week, Prof Wolff received and answered two Ask Prof Wolff questions about worker cooperatives, and addressed the recent protest and “looting” taking place in different parts of the country. He argued that the US economy is spiraling out of control in two Wolff Responds videos.

Also, in the first of a two part episode of Capitalism Hits Home released on June 4, Dr. Fraad explores the question of morality and values as we rank what is really essential in our society: profit or people.

This past Monday, June 8, the latest Economic Update addressed the topic of how the COVID-19 pandemic could have been (and has been) handled in countries with stronger socialist cultures.

Be sure to check out this week’s releases and share them with your family and friends.

Question from Juan: “How can we create a strategy to start morphing into companies owned by all employees?”

Prof Wolff: “In some states it's much easier to form a worker co-op and to get the proper papers at the  state government, to make it legal for you to function. In other states it's harder. That will vary and you'd need to talk to someone in an organization like the United States Federation of Worker Co-ops. There are a variety of institutions that will help you identify what the best states are to do this and what the particular rules are in each state.”

Ask Prof Wolff: Marcora Law in the US

Question from Diego: “I took action this past summer to try to implement the Marcora Law here in the US.  Is emailing our representatives an effective strategy to get these ideas into the congressional discussion?”

Prof Wolff: “Italians have the freedom to choose between going on [unemployment] and getting a regular check, or together with other unemployed [people] going into business with a group of people together in a worker co-op. Wow. Of course, Americans in general don't know anything about this. They don't understand that they are denied the freedom of choice that the Marcora Law gives to the Italian people.”

Wolff Responds: US Economy in Chaos

“In April and May roughly half of all commercial establishments did not pay their rent to their landlords… There are lawsuits being filed dozens of them every day across the United States in which landlords are suing the stores who aren't paying rent, banks are beginning to sue the landlord's who aren't paying back their loans. It's a spiraling out of control situation and it has serious ramifications because commercial loans have been packaged into securities in just the way that mortgages were that led to the crash of 2008 and 2009...
Millions of companies have been unable to honor all kinds of contracts because of the pandemic, because of the crash, because of the government's handing out money based on political considerations that have very little to do with the underlying economic reality. It is chaotic and we will have more chaos because of the problems with the pandemic and the capitalist system being used to treat them”

"When you throw 40 million people out of work in nine weeks you are looting lives... Who is looting whom?"

Capitalism Hits Home: What Is Essential: Profit or Life Itself? - Part 1

"In a worker co-op socialist system, were there to be a crisis, were the government to bail people out, they would be bailing out the working class... Managing the crises is something the workers would do in their own self-interest. They would never fire half of themselves."