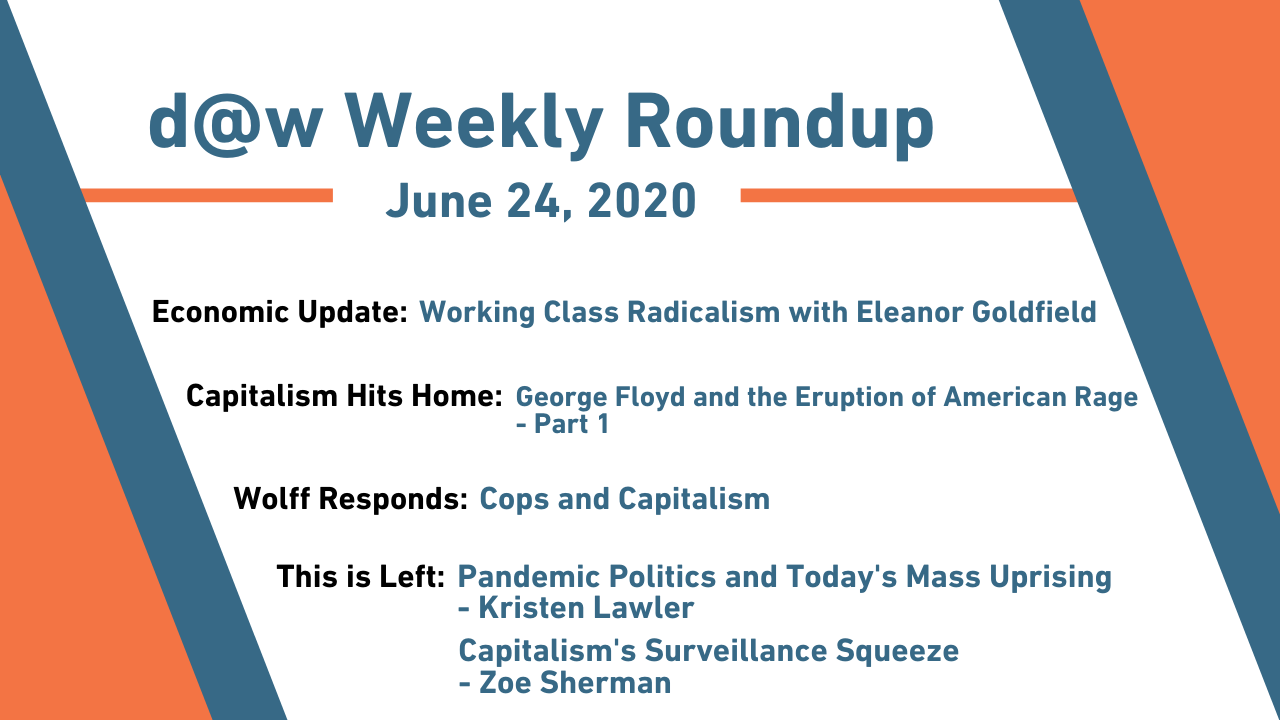 This week we release the first two videos of a new [email protected] series, This is Left.

In a Wolff Responds video addressing “Cops and Capitalism,” Prof. Wolff contends that the problems of racism, poverty and police brutality afflicting the US cannot be fixed without a fundamental change in how we organize our society, how we give people jobs, incomes, homes, healthcare, education, etc. Social change is necessary and ought to come out of the courageous people reminding us that Black Lives matter, that equality is something we can and need to continue to fight for.

In a new Capitalism Hits Home, Dr Fraad describes America as a powder keg waiting to explode from 50 years of a class war in which we became the most unequal nation in the developed world. Our money equipped and paid the "public servants'' who murdered George Floyd with depraved indifference. As a people, Americans have experienced our political leaders depraved indifference to our suffering as the rich get richer and all others feel the official knee in our necks.

The latest Economic Update addressed class war, how “dominating” citizens only creates more battles, and welcomed Jimmy Dore to talk about today's crises and the roles of the GOP and Democrats.

Be sure to check out this week’s releases and share them with your family and friends and help us spread our message. If you would like to support our work and are able to contribute, consider donating today. Visit us at www.democracyatwork.info/donate.

"If you have a society divided, you need to “enforce the peace,” don't you? Because you know as everyone else does that a society broken apart in two extremes of rich and poor is a society riven with conflict… Police can't fix the problem and they can't solve it. That's why throwing them at it is cruel for the population they abuse, and cruel for the monsters those police must sooner or later become.”

"The knee on our necks is not likely to be removed unless we make sure it is." - Dr. Harriet Fraad

"Six hundred billionaire's became [$434 billion] wealthier. 66,000 people live on the streets, in a shelter, or in their cars [in LA, up 12.7% from last year]. What kind of a society does this? If ever you needed me to summarize a program by saying "we can do better than capitalism" this list of statistics should have done it." - Richard D. Wolff

"I think that a lot of times, particularly in white organizing circles, people look at places like West Virginia as a throw away, that it can be discarded as something that's already a foregone conclusion to the far right wing extremism. But in reality, even if we look at something like the term "redneck" which has been propagandized and twisted to mean something different in today's world, actually comes from a labor rights background. The term "redneck" was started by white and black mine workers who tied on red bandanas and marched together for basic workers rights. And actually won basic workers rights during the mine wars at the beginning of the 20th century." - Eleanor Goldfield

“There was a fatalism about things because the system moved with such incredible velocity that the thought of stopping it and turning it around seemed overwhelming and almost impossible. And then a virus hit. The world changed dramatically and we all learned that the “machine” can stop.”

“Capital treats us as a raw resource. Waste not, want not; whether as consumer or as worker, surveillance technologies help capital to squeeze every last drop of value out of us. In a moment of disruption and danger, when our selves are more vulnerable than ever, capital’s move is to squeeze harder. What’s our move?”