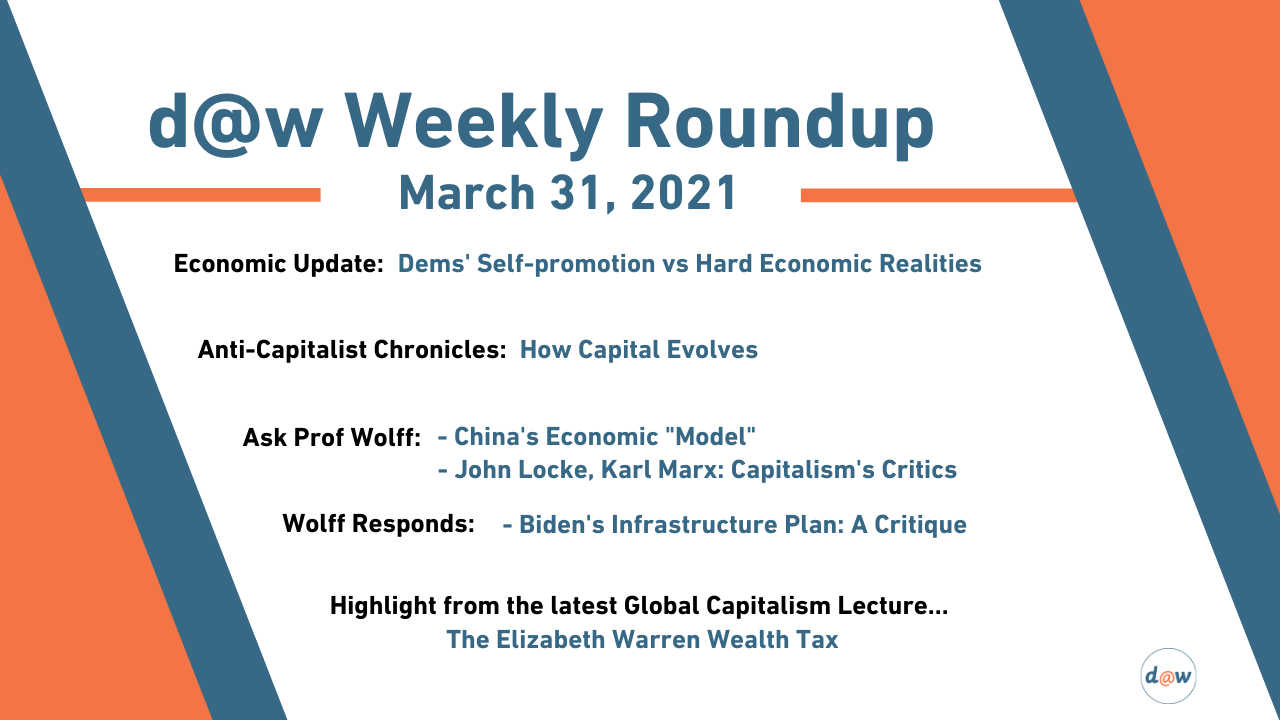 On this week's show, Prof. Wolff discusses the US coal industry decline, Brazil's Covid disaster, economic surge after Covid, and Elizabeth Warren's wealth tax proposal. On the second half of the show, Wolff interviews investigative journalist Bob Hennelly on the gap between Biden regime actions and pronouncements, and the hard realities of economic depression and "food insecurity.

Wolff: "It is interesting that the three countries in the world suffering the worst scourge of this disease, the United States, Brazil and India (ranking one, two three in horror) are all led by quote unquote "strong men governments." Bolsonaro in Brazil. Trump in the United States, and Modi in India. Right wingers, anti-immigrant, scapegoat specialists, failures to protect the public health of the people they claim to lead."

Harvey: “We're seeing in neoliberal ways in the sense that the authoritarianism is oriented to support the upper classes”

A patron of Economic Update asks: "I am wondering, because the Chinese have an essential left wing "government" dictatorship, although they are so far to the left they are almost out of sight, does this mean that the US and global economies will be FORCED to move to the left in terms of their spending plans and priorities, particularly now that the US dollar has lost its status as the global reserve currency?"

Wolff: “China is now a middle income so-called country and one that is gaining very quickly as Nikola (this questioners) recognizes… The model they use, the model that has worked so well for them, has allowed them to raise standards of living over the last 30 to 40 years much more dramatically than anything achieved in Western Europe, North America or Japan. They still have a way to go because they were very poor, but their rate of growth is number one both in GDP output and in average real wages of their working class. And that model therefore is powerful, and it's the model of a very strong government intervention, governmental regulation, and governmental control. The more laissez-faire minimum government, government hands off, government limited, all of that mentality associated with the United Kingdom and the United States celebrated in a more fantastical form by libertarian ideology, that doesn't look so good in comparison with what the Chinese with their powerful government have achieved. And my suspicion is, and I think Nicola (this questioners) you’re right to see it also, is that that model is going to impress itself more and more on the rest of the world.”

A patron of Economic Update asks: "I'm wondering if he could discuss how Locke's Labor Theory of Property compares and contrasts to Marx's Labor Theory of Value. I'm interested in how each theory functions but even more so in how they were developed and rationalized by Marx and Locke respectively."

Wolff: “... Locke opposes capitalism in the name of an earlier system of self-employed yeoman english farmers and small craftsmen and small merchants. Whereas Marx comes after capitalism after it has become dominant in Europe and criticizes it in the name of a better system to come, when the workers displace the capitalists, and become their own bosses, so that the surplus they produce is their own to decide how to use.”

March 2021 Global Capitalism lecture by Richard D. Wolff in which he discusses the new wealth tax proposed by Elizabeth Warren, why it's not irregular, why it's modest at best, and why there is such strong resistance to it.

Wolff: "Anyone who tells you that we don't already have a wealth tax does not know what they are talking about or they are lying to you... I hope you are asking, ‘Why in the world would we have a wealth tax on the kind of wealth the average person maybe can get (a home, a car, a piece of land on which the home sits), but the wealth of the wealthiest (stocks and bonds) not taxed?’ And you know the answer, don't you? It's because they're the wealthiest. They got it set up that way. It's a wonderful tax dodge for them. That's all it is. That's all it ever was..."

In this Wolff Responds, Prof. Wolff examines Biden's Infrastructure Repair Plan. He argues that the US has always incentivized the neglect of our infrastructure. Biden's plan will throw large sums of money to private companies to repair or rebuild. But much of that money, Wolff cautions, will be given to shareholders and as bonuses to top executives. Will any of it change the basic injustice and unfairness of our infrastructure maintenance program, or change the system that produces these crazy results? Biden is not prepared to do that.

Wolff: “2020 was a $9 trillion improvement for the richest in this country. Compare that to $1.9 trillion in the American Rescue Plan and perhaps another $2-2.5 trillion for infrastructure. It’s a context that you should keep in mind: who is being helped in these hard times a lot and who isn't? You and I aren’t… We’re about to give a lot of money to companies (not working people) who repair or rebuild infrastructure. Much of that they will take, as always, to pay out to their shareholders and to give wonderful paid bonuses to their top executives. And some of it will trickle down. But will it change the basic injustice and unfairness of our infrastructure maintenance program, or of the unequal society that corrupts everything? No. Biden’s not prepared to do that.”