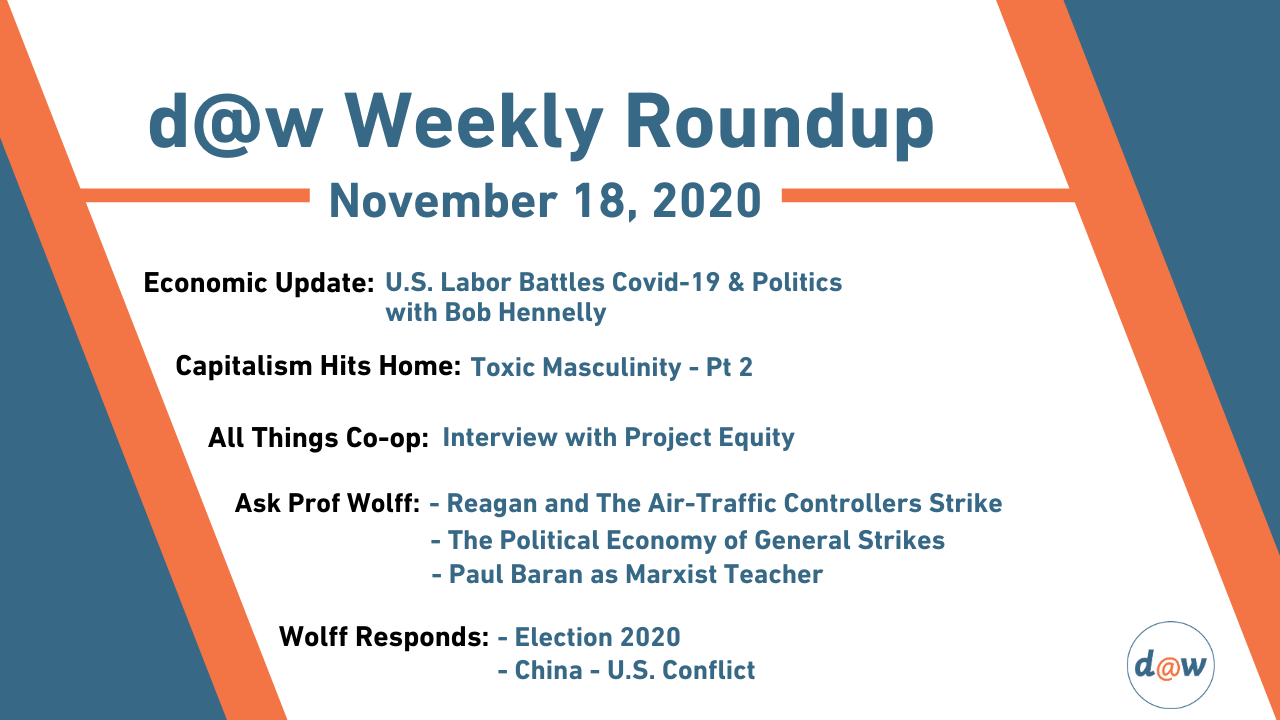 On the first half of this week's show, Prof. Wolff discusses labor's gains and losses, and the refutation of the claim that China's spectacular economic growth is a product of capitalism, not socialism. The second half of the show features an interview with investigative reporter Bob Hennelly on labor in the U.S. today, with a particular focus on public employees.

Wolff: "[Prop 22] is a defeat for the entire working class... What Uber and Lyft got was an exemption.They don't have to protect their workers, their employees, by the simple device of calling them something else. It's a profit in their pocket because they don't have to pay for the protections. That's what the law was there to force them to do and they just got out of the law. And you know what's going to  happen now? 49 other states are going to see the  same effort made in those states."

…
Hennelly: "For whatever reason Trump still has traction in many many union households... In much of the places that Donald Trump still carried the vote (I'm thinking of upstate New York), places where the manufacturing base was long eroded because of multinational policies that the United States facilitated, all that's left, Rick, is the prison and the hospital. Those places of employment, that's the backbone that's left."

On this part 2 of 2, Dr. Fraad and Julianna Forlano continue their discussion of toxic masculinity and how the social and economic conditions of its existence have transformed. Testosterone fueled aggression and heft are no longer needed or wanted in the workplace or at home. Force comes in when equality and democracy threaten old privilege.

Forlano: “If they were able to have democratization in their workplace, this would give them that sense of power that they seek, but power in a real way that's actually valid and useful and not going to be used to abuse someone else.
Fraad: “It's power with others rather than power over others... These men have a chance to have power with other men and women together. But they're choosing this hyper masculinist masquerade of strength because they're made impotent on their jobs where they have no say, and in their country where the politicians are often bought. And they don't want to admit it."

A Patron of Economic Update asks: "I was wondering if Professor Wolff could comment on the events of 1980 when Ronald Reagan, took it upon himself to call a union strike of air traffic controllers as illegal and by executive order, gave them 48 hours to return to work. They didn't and Reagan stepped in and got rid of over 11,000 workers, permanently banned them from working there, and also banned their union."

Wolff: “This question is not about history, it's about our situation right now which we access through a conversation of history which is often the best way to approach any topic...
The left, like the right, needs to be nurtured, supported, funded, excited, mobilized. And then it will act at key moments. But if you don't nurture it, and sustain it, and teach the classes, and produce the media, and involve the young people in an ongoing struggle outside of voting and far more active than going into a booth and flicking a switch, if you don't do that your power dissolves on you. And then a Reagan comes along and can do what he did.”

A Patron of Economic Update asks:"Several of the major unions are planning for a general strike should the current executive challenge the legitimacy of the election and refuse to leave office. The forced work stoppage early on the pandemic brought the Republicans to the table fast. Why did the working class not see that it was work stoppage that pressured politics? In addition should the strike be called to force trump to accept the results would it bring a greater awareness of working class political power via strike?"

Wolff: “Any strike is a kind of ultimate weapon a weapon of the working class that says if you abuse us if you threaten us if you treat us in an inhumane intolerable way you will drive us to use the most powerful weapon we have in our own self-interest to withhold our labor from you a peaceful act no violence is involved here we're just not going to work is a powerful weapon within a capitalist system… The business community, the academic community, the mass media work very hard to tell workers that they don't have that weapon, or that they mustn't use that weapon, or in the case of the United States actually pass laws that deny groups of workers the right to strike. Please understand what that means: the business community, the politicians, they understand the power of the strike. The irony is that those who have the power, the workers are the ones most hesitant to use it.”

A Patron of Economic Update asks: "Dear Professor Wolff: Apparently you had the opportunity as a student to study under the great economist Paul Baran. Would you be willing to comment on your experience as a student of Prof Baran, and on his contribution ( along with Paul Sweezy) to the body of modern Marxist economic analysis?"

In this Wolff Responds, Prof. Wolff talks about the latest US elections and what the results mean for Americans.
For more election 2020 commentary, be sure to join us Wednesday, 11/18/2020 at 7:30pm EST for the YouTube premiere of Global Capitalism Live Economic Update -  November 2020.

In this Wolff Responds, Prof. Wolff talks about the building tensions and clashes between the US and China under the Trump administration. He urges the incoming Biden administration to stop the hostilities against the rising Chinese superpower and spare the world from the horrific effects capitalist competition can produce. He argues that a new direction is needed.

Wolff: “The China blame game, china bashing, is very popular… In the past we've had similar kinds of situations and they have led to disastrous wars, military wars and I want to talk about that... Twice [WWI & WWII] tens of millions of people were killed in a conflict provoked by the capitalist competition of these three countries [USA, The UK, and Germany]... This time the declining economic power is a previously rising one the United States and the new ascending economic power is the People's Republic of China. And once again, competition, tension, trade wars, tariffs, skirmishes… On a basis of helping one another, mutual respect, finding ways of co-existing, we might be able to avoid that catastrophic destruction that the capitalist competition of the 19th and 20th century so spectacularly failed to do.”