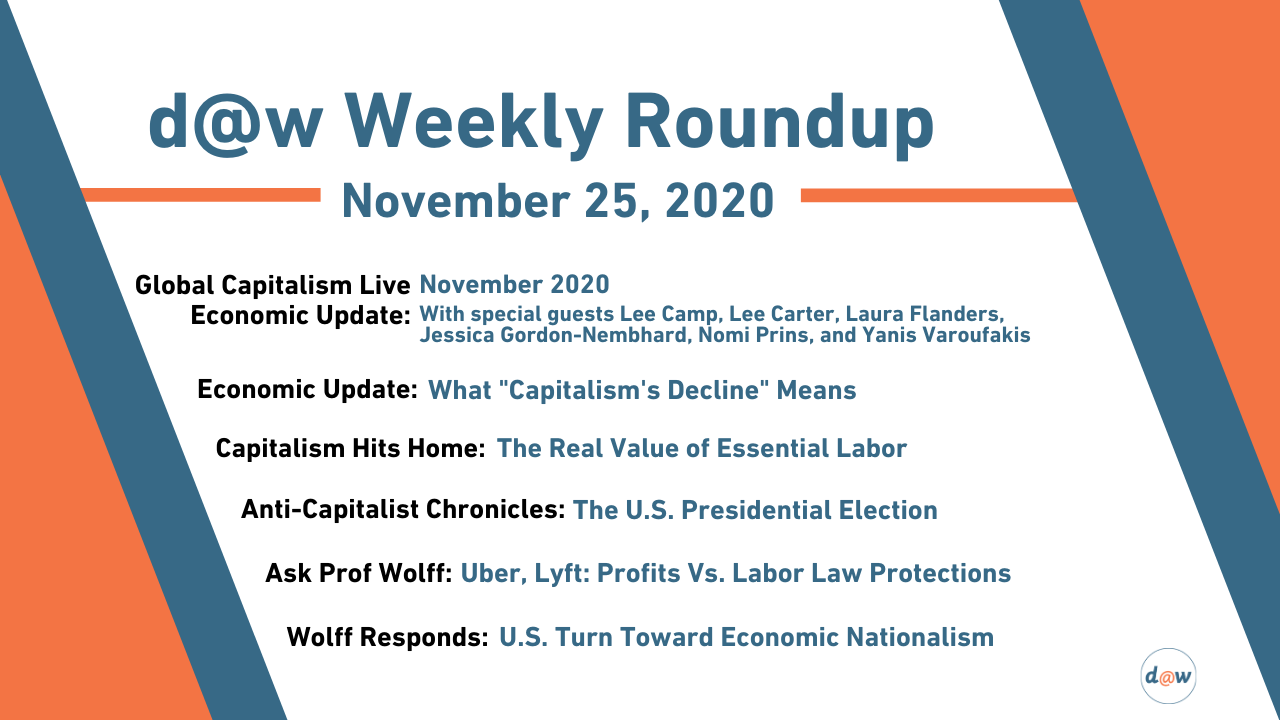 This week's show is dedicated to a discussion of the signs of US capitalism's decline. Wolff explores the passage of US capitalism from its birth, through its state-supported growth and expansion, to its global peaking from 1945 to 2000. He presents the causes of its ongoing decline this 21st century, and then offers a conclusion on the right, center and left political responses to decline.
Wolff: "[We] can handle a decline. We're a rich country. But you have to be ready to admit it in order to solve it. We are a declining economic power and that either gets faced and managed in a humane way or it drives us crazy into political and moral dead ends."

On this week's show, Dr. Fraad and Julianna Forlano discuss the bill just passed by New Zealand Prime Minister Jacinda Ardern’s Socialist Labor Party which explores and reveals the economic value of essential caring labor usually done by women. New Zealand’s social workers, child care providers, nursing assistants and other care workers will now be recognized and rewarded with a 30.6% wage increase.
Fraad: "Putting value on things like emotional flexibility, emotional dexterity, listening, caring, holding, meant that social workers in New Zealand got a 30.6% raise because their skills were finally valued.”
Forlano: "We really need to evolve from  our economic bottom line to a humanitarian bottom line and move our economy from usury, and rewarding usury to rewarding service."

On this episode of David Harvey's Anti-Capitalist Chronicles, Prof. Harvey presents his analysis of the 2020 U.S. elections.
Harvey: "If Biden wants to do anything he's going to have to come up with a politics which is much more progressive than that to which he has historically been attached. But here's something interesting, because within the Democratic party there is a tradition, an interesting tradition, which is much more radical and much more socialist (if you want to call it that) and yet it was mainstream... In 1944 [President] Roosevelt gave a state of the union address at the end of the second world war. And what Roosevelt said in this was as follows: 'Individual freedom cannot exist without economic security and independence. Necessitous men are not free men. People who are hungry and out of a job are the stuff of which dictatorships are made.'"

A Patron of Economic Update asks: "You mentioned CA Prop 22 in a recent video. You clearly felt that Uber, Lyft, et al, bought passage and fooled voters. But many of the issues that you brought up were addressed in the Prop; OT Pay, guaranteed minimum, health care stipends, etc. The opposition to Prop 22 never addressed the included provisions. If the provisions were unworkable or inadequate, I'm hoping you will clarify."
Wolff: “Profit is number one. Public safety, a distant second… Why would uber and lyft spend the time and the energy and take the public relations rich and risk and take the money they would have to raise to win an election if they're going to give the workers basically the same protections under this proposition that they already have under existing labor law they wouldn't do that and so that's not what they're doing. Whatever the provisions of this particular one really isn't the issue because it's the broad pattern across the country that's the issue, and the search to be able to call the driver of a Lyft and Uber car a gig contractor is fundamentally driven by the savings in the costs that generations of labor agitation have won for workers… This is a major defeat of the working class, allowing drivers to be paid less and to be cared for less than was the norm. That's what the proposition said: you're not bound by the norms of the law.”

In this Wolff Responds, Prof. Wolff discusses the shift to economic nationalism that the U.S. has taken under the Trump administration. American capitalism is in decline; investment in the US might be less safe than it once was. The decline is visible in the wobbling between economic nationalism and economic globalism, the outcome of which is unclear.
Wolff: “The centrist parties of Europe, they're frightened they're worried out loud now whether the United States is turning away from them too, and that their economic future lies more in working out arrangements with China than doing so with the United States… The world noticed that Mr Trump was allowed by all of the business institutions to go in these directions even when and if those institutions were at least publicly committed to something else… The world also noticed that there's a mass base for the “American first” turn to nationalism. Mr Trump got millions more votes in 2020 than he got in 2016. Not a rejection of where he's going… Anyone proposing to invest in the United States must wonder now whether that's less safe than it once was because where might this economic nationalism go… That is going to cost the United States, big time. And no fancy phrases from a new Biden administration changes any of that. Biden may be gone in four years.”