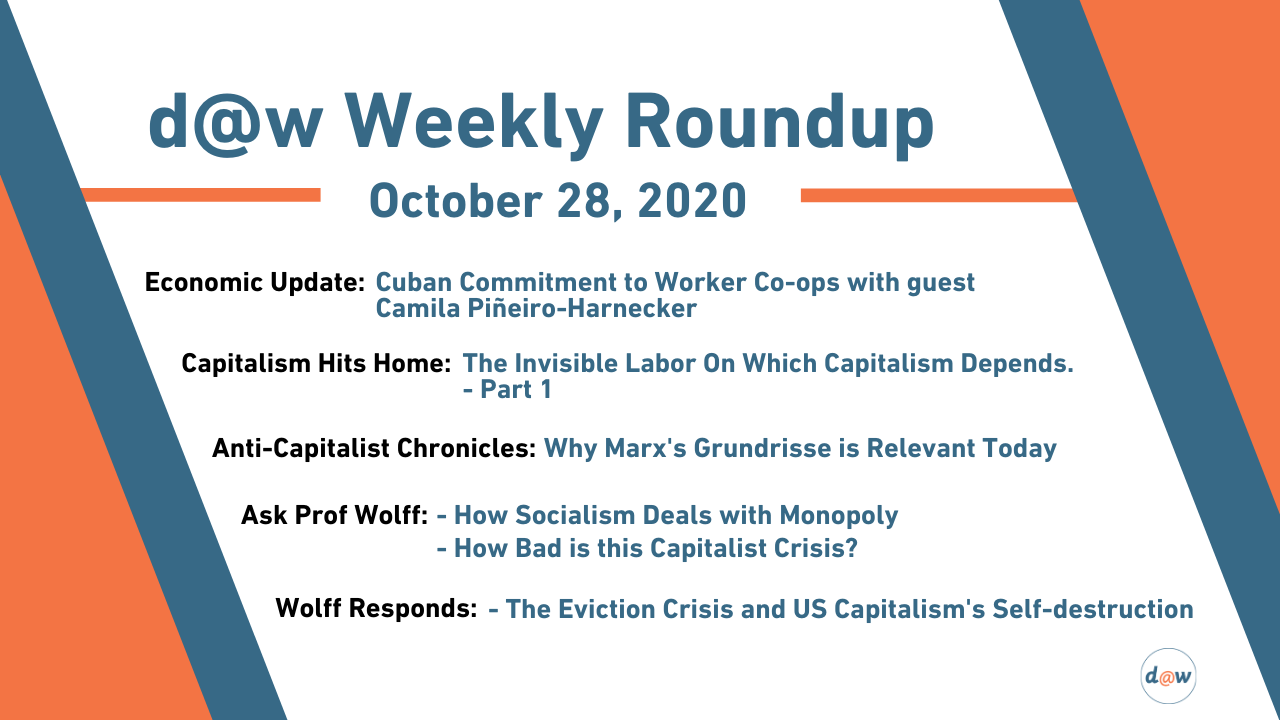 On the first half of this week's show, Prof. Wolff presents updates on the different metrics used for US unemployment, IMF on uneven recovery, money and US elections, Indigenous People's Day, and lastly China's commitment to digital currency, while big banks hold back other countries. The second half of the show features an interview with Havana professor Camila Piñeiro-Harnecker about Cuba's incorporation of cooperatives into their socialist strategy.
Wolff: “Three-quarters of all money given [to] senate races, house races, the presidential race, everything, three-quarters of it comes from less than 1% of the American people... We have the best government money can buy."
...
Piñeiro-Harnecker: "I think most of the population sees the cooperative as a useful and viable tool for strengthening socialism in Cuba.”

Capitalism Hits Home: The Invisible Labor On Which Capitalism Depends. And Guess Who Does It? - Part 1

This week's show focuses on the labor we all need in order to function in our world. It's housework, providing food, cooking food, let us avoid distracting hunger pains, that creates the order and cleanliness that allows us to be presentable in life, have clean clothes that don't smell, allow us to find the clothing we need to wear that day, and so on and so on. Fraad and Forlano try to answer why essential labor is devalued.
Harriet: “It's capitalist America. Why do we still have a feudal arrangement in the household? Well, partly because that does certainly suit capitalism... Capitalism has benefited because they don't want to take care of the workers... They're cared for by women's labor... [It's] not a job but an exercise of our gender fulfillment: cooking and cleaning."

On this episode of David Harvey's Anti-Capitalist Chronicles, Prof. Harvey discusses two important and somewhat contrasting passages of Marx's Grundrisse and the important insights about the present and future we can draw from them. While on the one hand Marx acknowledges that capital has had a civilizing influence, brought about innovations, it also is responsible for universal alienation, suicides, misery, inequality and capital accumulation.
Harvey: “When you conjoin [these two passages of Marx's Grundrisse], it provides us with an astonishing way of understanding the point to which capital has arrived in terms of its history... It civilizes at the same time as it fails to satisfy. It creates a misery even in the midst of all this potential wealth… And therefore we should say thank you very much, [capitalism] but it's time for you to move out of the way and give way to something else."

AskProfWolff: How Socialism Deals with Monopoly

A Patron of Economic Update asks: "How do you prevent monopolies without the use of government? Furthermore, how does a socialist mode of production prevent monopolies from forming? Or would government intervention still be a necessary function? Is this because socialism is usually predicated on the idea of cooperation instead of competition, or would this require a shift in the paradigm of how we conduct our business?"
Wolff: “An intelligently structured social welfare focused economic system would want to make use of the benefits of cooperation and the benefits of competition. And likewise to minimize the costs and difficulties of both cooperation and competition... Markets, if you use them you arrange competition and cooperation so that you get a good decent economic system that preserves certain core socialist values like democratic decision-making within the enterprise.”

AskProfWolff: How Bad is this Capitalist Crisis?

A Patron of Economic Update asks: "Do you think capitalism can survive near-collapse only for it to use the destruction created by this event to rebuild itself? It seems like people are so conditioned by capitalism that even capitalism's victims would want to try re-build it as it's the only thing we all know."
Wolff: “I hate to do this but I've got to be honest with you, this is a terrible economic crash… Capitalism's worst nightmare [is] when an economic downturn coincides with a non-economic crisis; could be a war, could be a drought, or a famine, or a tsunami. In this case it's a viral pandemic, Covid-19, that makes everything harder, harsher, worse… Things do not look good for this crisis and this capitalism at this moment. ”

Wolff Responds: The Eviction Crisis and US Capitalism's Self-destruction