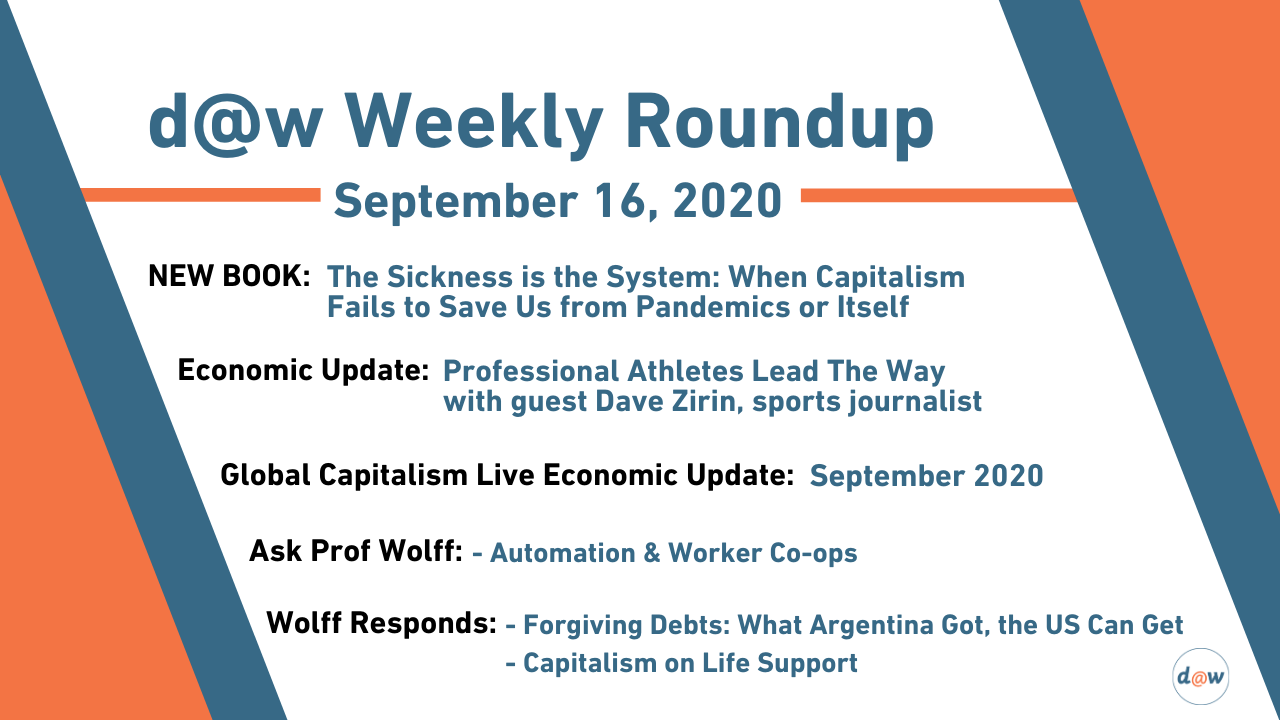 "The Sickness is the System: When Capitalism Fails to Save Us from Pandemics or Itself" is a compilation of essays by Prof Wolff, released this week!

Richard Wolff discusses the fatal flaws of the rental eviction moratorium and speaks with guest sports journalist Dave Zirin about the significance of the athlete strike on the latest Economic Update.

In the September Global Capitalism Live Economic Update, Prof Wolff focuses on US election and the way forward: historic action of US professional athletes; fading power of GOP, Dems, and organized labor; emerging fascism and more

In two Wolff Responds videos, Prof Wolff addresses the signs of a capitalism on life support, and the example of Argentinian debt relief as a precedent for possibilities in the US. 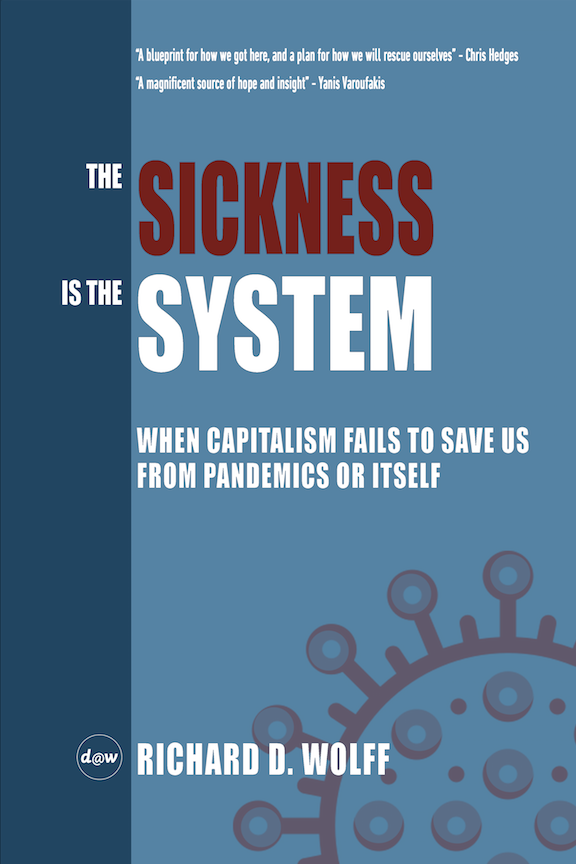 The Sickness is the System: When Capitalism Fails to Save Us from Pandemics or Itself
This NEW BOOK by Prof Wolff is a unique collection of over 50 essays, that argues that "returning to normal" no longer responds adequately to the accumulated problems of US capitalism. What is necessary, instead, is transition toward a new economic system that works for all of us.

"We're not giving the tenants of this country a gift the way we gave the big [airline] companies. We're giving them a loan that can get bigger, and can be charged interest... The companies got a gift. The renter, [they] got a loan." - Richard Wolff

"There is a long tradition of labor playing a central role in the fight for racial justice but its a tradition that's certainly been, I would say, separated in the decades since the civil rights movement in the 1960s and 1970s. So [the athlete strike] is a huge deal. It's put the question of labor into the [Black Lives Matter] movement." - Sports journalist Dave Zirin in conversation with Richard Wolff

“So fragile is the private capitalist sector of the United States, so anxiety ridden it is about its security, its safety, its ability to reproduce, that there has always been a mantra of private capitalism in the United states to avoid competing with the public sector. We have systematically blocked the government from producing goods and services in competition with private producers that became a taboo… The crazy fundamentalism that suggests everything is done better by private [sectors] than by public… It's put our cities, our states, and even our federal government but particularly our cities and states (important levels of government here in the United States) in an impossible situation.”

“In a worker co-op if the demand for what you produce disappears, you produce something else. If you need fewer workers than you used to, then the system works out where those workers go to those areas where the demand for goods is going up. All of that is worked out with a basic commitment that the worker is secure in a job and an income, no matter what.”

Wolff Responds: Forgiving Debts: What Argentina Got, the US Can Get

“People rob you with a six gun and some rob you with a fountain pen. The system is one of robbery, as we all know or should know. But the robbery has been made legal, and in a hundred ways you can be screwed out of your money, your wealth, your income. In perfectly legal ways millions of people have been losing their homes in the United States over the last decade in just that way… Countries have leverage, we call it. They owe so much that they are in a position to bargain, and to press their creditors. ‘Give us a deal or we won't give you any of your money back’… So Argentina just cut its debt in half... $111 billion dollars. And that was cut in half... Why don't we do that in the United States?... What about students with levels of debt they cannot reasonably be expected to pay? What about households?”

“I want to show you how dependent the economy today is on the government, what a total and complete mockery [today’s economy] makes of libertarian, right-wing, pro-capitalist notions that the private sector is what makes the economy successful and the government is an inefficient, inappropriate, and unwanted “intervener.” This fantasy this ideology has been around a long time it was always untrue but it is now laughably untrue.”

Learn more about Prof Wolff's latest book, The Sickness is the System: When Capitalism Fails to Save Us from Pandemics or Itself, that is available now!
www.democracyatwork.info/books