What GOP-Tea Party Risks With Block of New New Deal 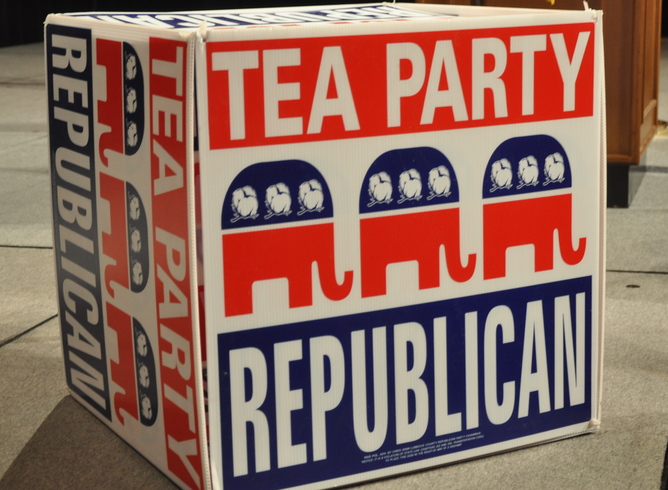 This article originally appeared at Truthout.

Many Germans in the years before 1933 dismissed the little man with the mustache: He could never take power, let alone keep it. Tzarist Russia’s elites thought the small social democratic party posed little threat. Batista’s minions ridiculed the lawyer and his friends when they first dashed into Cuba’s mountains. Greece’s established Socialist Party feared nothing from the tiny Syriza Party forming to its left. Such speedy dismissals of these groups underappreciated their social roles and especially the conditions that supported them.

What might these examples suggest about the Republican Party and Tea Party activists? The latter sometimes seem to have peaked and begun to fade and splinter. Yet other times they seem revived, as in Republican opposition to Obamacare and threats to shut the government down. What conditions support them?

Analysis of Republicans’ actions begins with the economic crash of 2007-2008 and the depressed economy that persists. It is undermining the finances and living standards of middle- and lower-income people. They cannot carry much more debt nor raise their real wages. Rising prices mean the cost of the American Dream slips ever further beyond their reach. Promises of rising living standards for workers and students preparing for work are mostly being broken. Long and deeply held hopes that hard times will pass are increasingly questioned or abandoned.

In such conditions, major big business interests and the corporate rich are determined to prevent replays of left-wing criticisms and what those achieved in the 1930s Great Depression. Then, Communist and Socialist Parties, in coalition with the CIO union drives, had worked a New Deal with Roosevelt’s government. Taxes were raised on corporations and the rich to pay for creating the Social Security and unemployment compensation systems and for a huge federal jobs program (not to mention allying with Stalin’s USSR in World War II). Having worked for decades to roll back that New Deal, the right now fears and sets itself totally against anything like that happening again.

Fear, instinct and habit drove the right, after the 2007-2008 crash and bailouts, to build intense opposition to virtually everything the government did or might do. The government was vilified as the cause of the crisis and its effects. The crisis was the government’s excuse to add taxes to peoples’ already unsupportable burdens. The government would waste revenues on unwanted social interventions: depriving citizens of rights to buy and own guns, imposing health-insurance mandates and “death panels” while increasing that “47 percent” of the population who abuse entitlements to food stamps and other supports at the expense of taxpaying workers.

Republicans effectively silenced any talk about, let alone action for, a federal jobs program. They kept debates over Social Security and food stamps focused on the size of cuts to them, and so on. Republicans mostly welcomed the traditional far right groups, newly invigorated as the Tea Party. These would help promote and strengthen the alliance against government intervention no matter how bad economic conditions became.

The Republicans’ remarkable successes to date, notwithstanding Obama, do not flow primarily from their Tea Party alliance or its lavish funding. They are more the result of the right’s major project in the preceding decades: destroying the New Deal coalition. First, immediately after 1945, the right demonized the Communist Party as committed to violent treason. It followed by equating communism with socialism. With those parties destroyed, it concentrated on undermining organized labor, starting with the 1947 Taft-Hartley Act. The destruction of the New Deal coalition was so systematic that it left a legacy of organizational anxiety and political isolation among many Americans. Any political or labor organization on the left had become suspect or dangerous unless it carefully expunged from its programs any criticisms of capitalism.

Viable left organizations and alliances with histories of developing critiques of capitalism and corresponding economic demands have thus been largely absent from recent US history. No trusted networks evolved among activists that could have mobilized a contemporary version of the New Deal coalition. When Republicans directed popular dissatisfaction after 2007 against the government, no comparable push-back came from the left. It took years until Occupy Wall Street (OWS) flashed onto the public consciousness. OWS was powerful, but not for long. The organizational foundation for sustained activity was lacking. OWS had to build organization from scratch and against great anxiety and skepticism. It made headway, was hurt by governmental repression, and now simmers over what to do next. The conditions for its resurgence are in place – waiting for OWS or successors to respond and build on them.

Republican theatrics around shutting down Washington, opposing Obamacare and so on repeatedly emphasize and reinforce antigovernment feelings. Tea Partiers mobilize their stalwarts around extreme dramatizations while more moderate Republicans mobilize the less extreme. The point is to keep popular anger focused away from business or capitalism and on the government (as if it were independent of business and capitalism). The conditions to support all that are in place.

The Republican-Tea Party alliance operates a weapon of mass deflection, protecting capitalism from criticism. Sadly, the Democrats neither expose nor attack the Republican project. Many endorse it, while others – the party’s center and left – mollify the victims of crisis with promises, some palliatives and much pretense. While agreeing with Republicans that saving capitalism is the task at hand, Democrats will make it slightly less profitable for business and the rich and so slightly less painful for the 99%. For securing capitalism, the parties have evolved an effective division of labor – for now. The diffuse Tea Party survives, like other too-quickly dismissed movements with tactics that seem “bizarre,” because it serves key functions (and thus secures key funding) in today’s society.

Ironically, if the New Deal actually saved capitalism from what might otherwise have happened – e.g., fascism as in Germany, Japan, or Italy – a haunting question arises. Does the right’s blockage of another New Deal now risk contributing to what was avoided in the 1930s?