What's up with divestment, anyway? 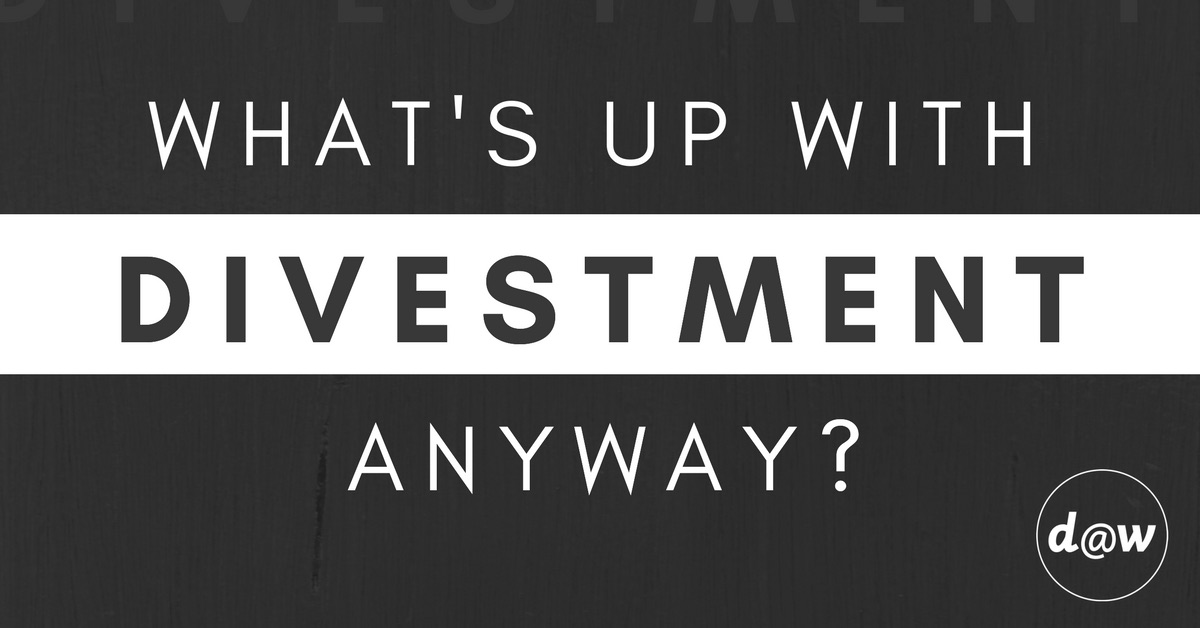 On Monday, June 26, 2017, the City of Los Angeles Budget and Finance Committee held its usual weekly meeting. A group of suits huddled along the perimeter of the room. They shot preoccupied glances at many of the people sitting in the rows of chairs, most of whom were raising red and blue signs that read “Dive$t LA”.

“It’s rare that Budget and Finance has such a packed room,” said Los Angeles City Councilmember Paul Krekorian. He was looking at about one hundred people, not including the folks packed into two overflow rooms and the thousands of others streaming the event on Facebook Live. 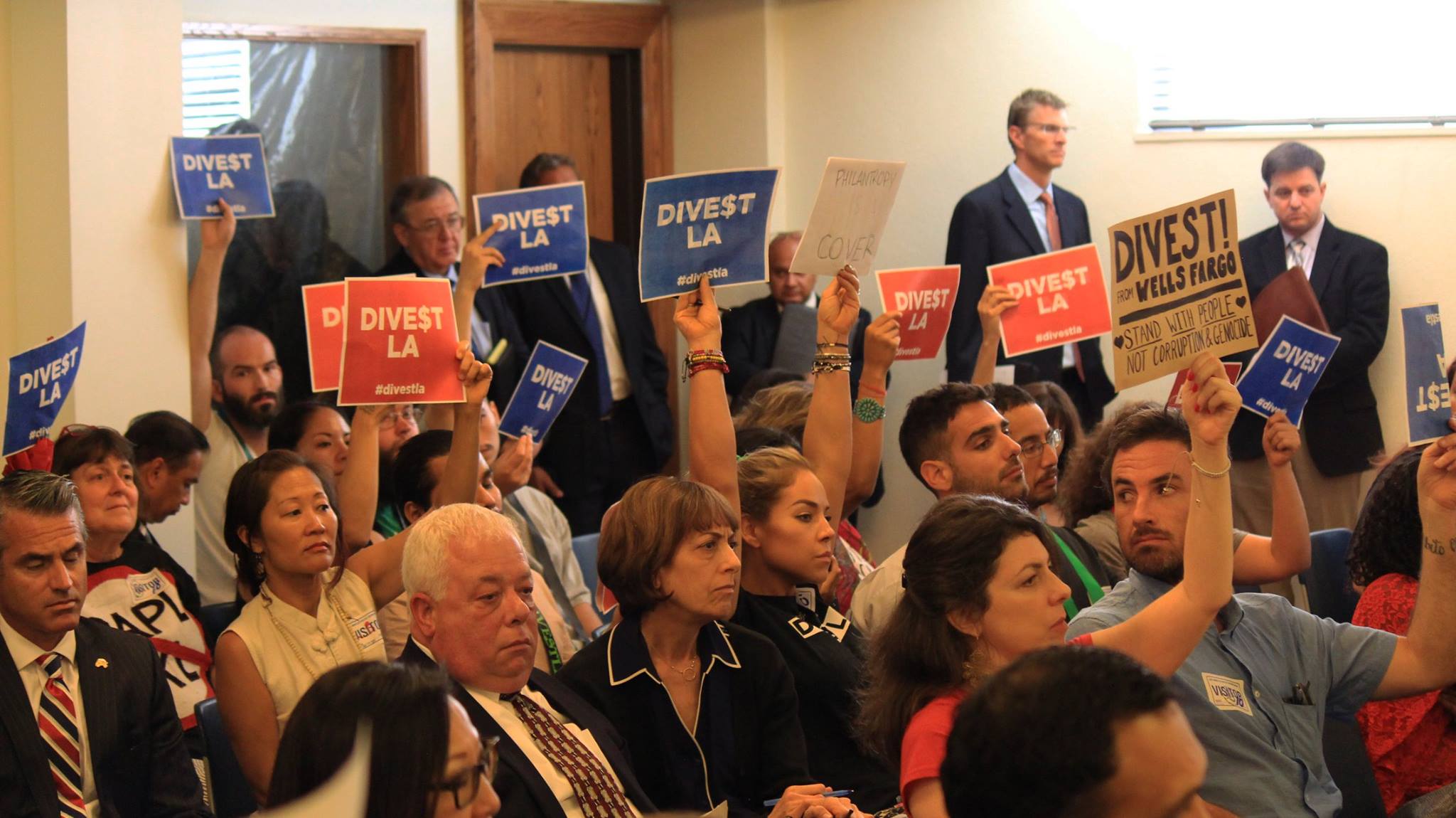 The meeting was the culmination of a four month campaign aimed at getting the City of LA to move away from doing financial business with Wells Fargo, one of the largest American banks.

Since the start of the Great Recession in 2008, popular sentiment has not been kind toward banks. Scandals such as the manipulation of the London Interbank Offered Rate (LIBOR) have continued to plague banks in the years since, but at the moment, Wells Fargo seems to be winning the prize for the most despised banking institution.

And for good reasons: it was caught opening accounts for people who had not requested them; managers at its branches forced tellers into predatory lending practices; and most recently, the bank was charging customers for auto insurance they had not purchased.

Local and federal regulators levied fines on Wells Fargo, but this wasn’t enough for some. Citizens from diverse communities formed groups whose demands varied from better regulation to more radical system change. But the events that catalyzed the formation of #DivestLA were the protests against the Dakota Access Pipeline (DAPL) at Standing Rock, in North Dakota. The construction of a crude oil pipeline on land belonging to the Native American tribes was financed by major American and European banks. Wells Fargo happened to be the major investor. Environmentalists, American Indian groups, ex-Bernie Sanders supporters, and others came together to form groups across the country calling for cities to stop using Wells Fargo’s banking services. In other words, to divest.

In February 2017, City Councilmember Kshama Sawant lead the divestment victory in Seattle and moved $3 billion out of Wells Fargo. In May, New York City Mayor Bill De Blasio announced plans to divest from the bank.

Meanwhile, Los Angeles saw the rise of #DivestLA (DLA). During the first half of 2017, inspired by Occupy Wall Street, DLA began occupying City Hall meetings. Some of DLA’s organizers were activists during the mid-1980’s for divestment from South Africa during the time of apartheid, others are graphic designers and artists who recently found a calling for social justice. They hold the shared belief that social change will come about most likely, in this day and age, at a local level, and consequently, they’ve developed strategies to effectively engage their City Council members. By June 26, DLA had supporters from each Council Member's district in front of cameras to speak on the importance of the group’s efforts.

DLA’s first stated goal was to redirect public funds invested in extractive industries such as fossil fuels and private prisons to other sectors, such as renewable energy. In April, as has been reported by many sources, the group approached Council Members Paul Koretz and Mitch O’Farrell, who supported a motion to divest from Wells Fargo. That motion was what was discussed on June 26, 2017.

The next day, LA City Council voted unanimously to report on options for divesting from Wells Fargo.

The City of LA, according to the Office of Finance, has 800 accounts with Wells Fargo, and about $40 million deposited Wells Fargo as investments. Furthermore, per DLA’s estimates based on City records, LA paid over $100 million in investment banking fees, mainly associated with the emission and interest on bonds for the funding of public projects. More later. But $100 million in fees to an entity with whom the City is in constant litigation?

“We’re a rich city! Why is it that we have all these problems?” Michelle Melner, who co-leads Divest LA’s Policy and Research, asks rhetorically. By problems, she was not only referring to the exorbitant fees paid, but also - among other things - to the dramatic increase in homelessness, the poor condition of infrastructure, and the overwhelming difficulty of getting around.

And now here is the gist of Michelle’s two-fold answer. First, what the City of Los Angeles spends in banking fees could go to solving some of those problems. Mayor Eric Garcetti pledged $100 million to eradicate homelessness (but half that money is caught up in pending asset sales). But hey, wait… why does $100 million sound so familiar? Right, $100 million goes for bank fees!

Second, the very reason those fees exist, is due to an ineffective way of financing public works. In the words of Phoenix Goodman, the other half of DLA’s Policy and Research: “Banking is a social good”. But we have to ask: do we all benefit equally from banks? Where are banks’ profits going? In private banking, the profits accrue to a small number of people depriving others of resources. See “Cities Paying Millions to Get Out of Bad Bank Deals” for more discussion on this issue.

So, as you may have guessed, DLA isn’t focusing solely on divestment. “It’s not enough to divest from one Wall Street bank into another,” continued Goodman. “We are dealing with a world city. Best case scenario we are going from a very unethical bank to a slightly less unethical bank. And that’s no system change, that’s just a symptom change. So what we’re doing is… We want to create a public banking system.”

A public bank is any bank owned by a city, a county, a state, or a country. Much like we have a publicly-owned postal service, or utility company, we can envision a publicly-owned financial institution. Many countries around the world, from Germany to Costa Rica, have some form of public banking.

"The spectacle of bank leaders rushing to Washington and begging for a bailout was not lost on the American people.”

#DivestLA is not alone. City councils in Philadelphia, PA, Oakland, CA, and Santa Fe, NM, are exploring public banking feasibility. An Oakland City Council Member, Rebecca Kaplan, said it best: “Public banking can give us a bank that is more responsive to the needs of the community, rather than prioritizing the needs of shareholders who don’t live in our community or the needs of corporate profit.”

We all know that banks as they are now aren’t helping us. The following is a brief laundry list of some ways in which they aren’t:

Now let’s look at the advantages of a public financial institution. According to the Public Banking Institute, public banking would reduce taxes while increasing infrastructure spending. As a financial credit granting institution, a public bank could loan money to the entity it serves without charging exorbitant fees for the service. Thus, taxes would be reduced because they wouldn’t have to pay the interest currently associated with the emission of bonds.

But how, you ask? You don’t need to look too far. North Dakota has had a public bank for close to 100 years. That bank hasn’t supplanted other banks. It has done exactly what it was intended to do: satisfy the demands not met by the market. In fact, it was founded by farmers who required loans, but were not receiving them from private banks.

Currently, the State of North Dakota’s assets capitalize the Bank of North Dakota (BND). BND holds the state’s revenues as deposits. It also makes low interest loans to students, existing small businesses, and start-ups. As a public bank, BND pays dividends to its only shareholder: the citizens of North Dakota. In 2015, BND reported $130.7 million in net earnings in what was its twelfth consecutive year of record profits. All during a period when banks were failing left and right. The regular annual surpluses have eliminated the need for tax increases or cuts of essential public services.

It is possible to envision and create a banking system in which governments extend credit to the own economy without charging interest. To quote Michael Hudson, Distinguished Research Professor of Economics at the University of Missouri, Kansas City: “We don't have to make finance into the ripoff system it's become.”

If you are wondering whether a public bank would have branches and offices, the answer is: it depends. It depends on whether the bank is exclusively an investment bank or also a commercial bank. In the first case, the bank would not be able to hold citizens’ deposits, so having branches wouldn’t be an option. In the second case, solutions on a federal level have been proposed including utilizing the infrastructure of the United States Postal Services. There are north of 30,000 post offices nationwide, and every day they deliver things of value.

This wouldn’t be anything new. The US government ran the Postal Savings System until 1967. At its peak, it was used by 4 million Americans and had over $3 billion in deposits. Many other countries across the world offer postal banking. BancoPosta, the Italian Post bank, recently saw an increase in deposits because customers view it as more stable than private commercial banks. (One caveat, though: in case of a sovereign debt crisis, the verdict is out on whether BancoPosta would survive the turbulent times).

There are many other alternatives models to our current financial system that could be examined and that could appeal to a growing number of people, activists and non-activists alike. “One of the many consequences of the collapse in 2008 has been a renewed interest in public banking,” says economist Richard D. Wolff. “The hostility to the private banking system is quite hot. The spectacle of bank leaders rushing to Washington and begging for a bailout was not lost on the American people.”

DLA has understood to affect change, you need to show that people are behind a cause because they understand it. You need to give ideas to local politicians because frequently they don’t have them. Petition, phone banking, and citizen lobbying: all techniques #DivestLA used.

The verdict is still out on whether their efforts will be rewarded, but things have started to shift. On July 25th, 2017, Councilmember Herb Wesson and Paul Krekorian presented a motion for the City Council to report back on a resolution to create a state-chartered public bank.

In an age where activism becomes more technical and less about angry shouting (even though there is always a place for that), activists need to communicate the changes they wish to see. #DivestLA is a model for activist groups that wish to see power to the people, not to capital. To avoid a future in which public banks finance the wrong sort of activities, economic justice advocates have to partner with the organizations that are promoting public banks, because their fights are one and the same: more access to economic resources for everyone.

Andrea Iannone is an organizer with Democracy at Work - Los Angeles Action Group. He also translates articles from English to Italian for [email protected]