Cooperatives: The key to climate action? 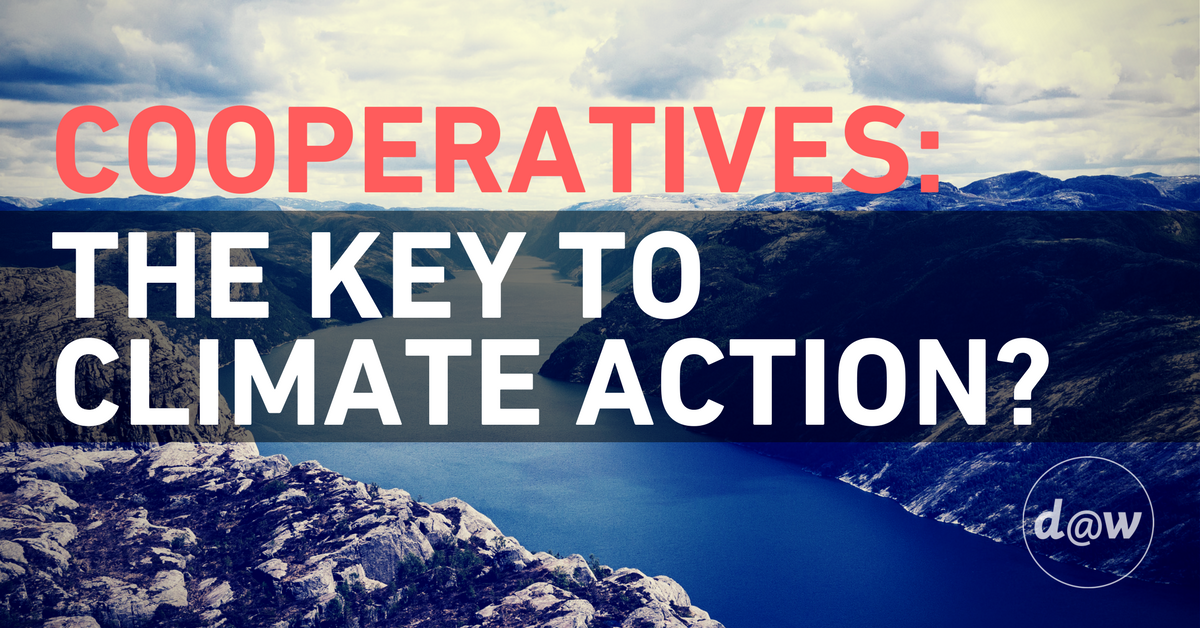 After prolonged resistance, a tentative victory has been achieved against the Dakota Access Pipeline. Native Americans and their allies spent months in a standoff against oil infrastructure that threatened water supplies and sacred sites. The struggle represents a conflict between different visions of the world. One a vision of short-term wealth creation that benefits a few while threatening natural resources and the climate. The other a vision of human well-being based on protecting water, soil and air for future generations.

Indigenous peoples' ways of life represent alternatives to current patterns of economic development. Opportunities also exist for the rest of us to build alternatives in line with shared values and ecological boundaries.

Our current economic growth model assumes we have an inexhaustible planet. This approach will not ensure our long-term physical survival. There are some glaring signals that it won’t ensure our economic survival either. Examples include the financial crisis of 2008, findings that wealth inequality stunts economic growth, and admissions from the International Monetary Fund that economic trickle-down theory doesn’t work. Critics from the Nobel laureate Joseph Stiglitz to the Pope have raised the alarm on “unbridled capitalism.”

To solve the greatest challenges of our time, climate change and inequality, we need an economic system that serves us better. However, beyond identifying and agreeing upon the problem we often stop short at imagining solutions.

There are signs that the seeds of a stronger and more responsible economy may be taking root. Businesses that put social and environmental principles before profit already exist. These enterprises emphasize greater equality and collective ownership. Financial decisions are not left to the power of a few, whether government bureaucrats or corporate CEOs. They are made democratically by the generators and beneficiaries of economic activity: workers and customers.

This diverse economic sector has many names: social economy, solidarity economy, local economy, new economy, the next system. The UN has even formed a task force to examine the benefits of these approaches.

Sounds like a nice idea, but is this economically realistic? It is not just realistic but could bring more benefits to society as a whole. These businesses are often more resilient than "mainstream" companies that regularly suffer job losses and bankruptcies. A recent UN report concluded that worker- and customer-owned banks made less risky decisions. These banks actually outperformed investor-owned banks during the recent global financial crisis. Similarly, worker-owned cooperatives show better results, even in the face of adversity.

One well-known example is Mondragon Cooperative Corporation. This successful worker-owned company of over 70,000 employees is the tenth-largest company in Spain in terms of asset turnover. The company operates internationally with a diverse portfolio, including the manufacture of industrial machinery. Mondragon experienced lower levels of unemployment during the 2008 recession and still remained globally competitive. Instead of firing staff during the economic downturn, employees voted to take pay cuts and top managers took their share of the burden. The Spanish cooperative is not alone. Over 2008, in the midst of the financial crisis, the combined turnover of the world’s 300 largest cooperatives was an impressive $1.6 trillion. Comparable to the GDP of the ninth-largest economy in the world.

Action to fight climate change could gain from new economic approaches. Take the two sectors that contribute the most to global carbon emissions: energy and agriculture.

In Germany, community-owned energy cooperatives are booming. The impressive success of wind power in Denmark has been driven by community-owned wind turbines. In the US, the move away from utility-scale power plants is also happening. Solar power generation in the US may be underestimated by as much as 50 percent. This is due to the exponential growth in rooftop solar, which is not systematically recorded. The opportunity to magnify the potential of small-scale energy producers could be immense.

Ecologically friendly, small-scale farming benefits both food systems and the climate. Agricultural cooperatives are indispensable to this kind of farming. They help small-scale farmers remain competitive through collective purchasing and distribution networks. Farming built on cooperatives and ecological farming could be better for the climate and food security.

Action on climate change could both support and profit from a more stable and democratic economy. Climate finance and subsidies currently being swallowed by the fossil fuel industry could be redirected to locally owned energy and farming. Socially responsible financial institutions could manage and distribute these funds. The result could be a stronger economy that works better for both people and the climate.

In a letter to Obama last year, Chief Arvol Looking Horse of the Dakota, Lakota and Nakota implored him to "move us toward sustainable development as fast as possible".  A framework for a more democratically managed and collectively owned economy could be part of this. The re-imagination of the economy is already in motion. It’s time for the climate movement to get on board.

Gaya Sriskanthan has more than 15 years of experience working on climate change, environmental protection and sustainable development with a range of organizations, including the United Nations, the World Wildlife Fund and the U.K. Department for International Development. She currently focuses on indigenous peoples’ rights and civil society inclusion in climate change action. Follow her on Twitter: @gayasktn