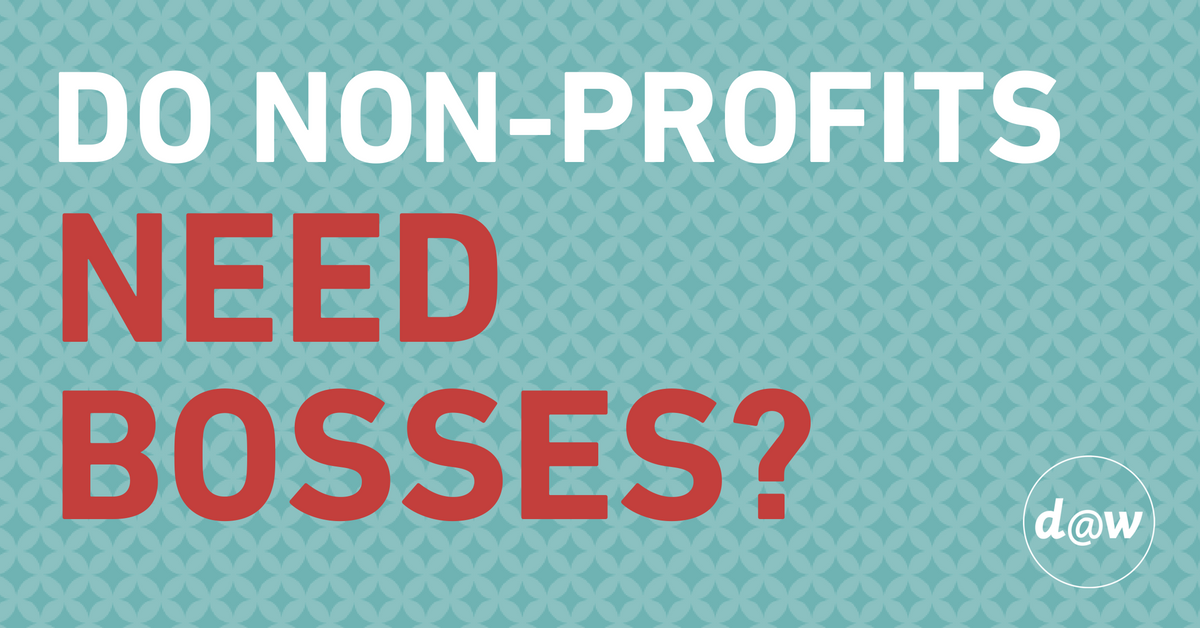 If we want our nonprofits to be good actors in the world, their internal structure should not be authoritarian.

Worker cooperatives represent an alternative to capitalism. This doesn’t mean that they eliminate markets as a way of distributing goods and services. Rather, they render the capitalist unnecessary. Because workers collectively own and operate cooperative workplaces, there is no over-class of bosses and investors to siphon away profit and distribute it amongst themselves. Without capitalists, worker-owners retain the value of their labor and allocate profits as they see fit. This system has benefits for workers: cooperatives pay higher wages on average for the same position as their capitalist counterparts and they are less likely to resort to layoffs as a way of balancing the books.

It might sound odd to suggest that nonprofits have something to learn from this model. By definition, nonprofits are subject to the Non-Distribution Constraint, which forbids them from distributing any profits to individuals. Nonprofits – as the name would indicate – simply have no profits to divide. But there is more to the cooperative model than just democratic control over the distribution of profits. Cooperatives are democratically governed in all respects, and as such represent a radical departure from the traditional structure that goes beyond the distribution of excess profit.

The question is essentially one of hierarchy. Every day, some earnest person decides to leave the corporate world in order to pursue mission-driven work in the nonprofit sector. It might feel better, for instance, to support childhood literacy than to produce and sell a shiny thing that serves no deep need, was not ethically sourced, and will occupy a landfill in 18 months. We want to improve the world. But we forget that a central part of the social and economic world is the workplace itself. So why do nonprofit organizations tend to mirror the hierarchical structure of the for-profit corporate world?

In the for-profit corporate structure, power flows top-down through a cascade of executives and managers. Those doing the work on the ground have the least say in how things operate. This structure is crowned by a board of directors that is often highly uneven in its level of personal investment in – or even comprehension of – the organization’s work. Feedback loops between staff and board can be long and slack. Pay differentials are ‘gotten away with’ rather than democratically justified. Resentment festers. Jobs turn over. Social movements are de-fanged by careerism. This is not the system that the multitude of conscientious individuals staffing nonprofits everywhere would agree upon if they sat down and planned it out from scratch.

Here’s a radical suggestion: if we want our nonprofits to be good actors in the world, their internal structure should not be authoritarian. After all, if we were to encounter this autocratic form of governance in the political sphere, we would found nonprofits to combat it.

The point is not to discard structure, but to rethink it. The implicit assumption of the traditional capitalist firm – formed under conditions of oppressive industrial production – is that workers are lazy, unimaginative, and irresponsible. This necessitates an expensive class of managers and technocrats to discipline workers and maximize their output. Opposing this model is a constellation of approaches going by names like ‘Sociocracy’, ‘Holacracy’, and the ‘Teal organization’ movement. These approaches assume that workers are inherently active, creative, and self-organizing if they are allowed to be. Such approaches recommend the absorption of many managerial duties into semi-autonomous teams of staff members. Accountability becomes more horizontal than vertical, and those who are most in touch with the issues at hand make the important decisions. Salaries are also typically transparent and justified to one’s peers.

These democratic approaches are not specific to worker cooperatives. In fact, their proponents devote most of their energy to reforming the policies of traditional capitalist firms. This makes sense given that capitalist firms dominate the economy and are not going away anytime soon. Nevertheless, cooperatives have an advantage in that workplace democracy is ‘baked in’ to their structure at a fundamental level. If you work for a progressive capitalist company, new management could always roll back any reforms you are currently enjoying. In contrast, depending on the legal status of your cooperative, it may be impossible to de-democratize your workplace without folding the entire enterprise. Cooperatives guarantee a basic level of trust in the workers’ ability to self-govern.

The question is how far democracy can be embedded into a nonprofit organization. This question is now being taken up by Oakland’s Sustainable Economies Law Center, a self-described ‘worker self-directed nonprofit.’ Because the Law Center supports worker cooperatives, housing cooperatives, community renewable energy cooperatives, and other forms of economic democracy, they consider it important to practice workplace democracy themselves. In the words of staff member Chris Tittle, “distributing leadership throughout our organization has undoubtedly led to us to be more creative in our work, more inclusive in our perspectives, and more accountable to each other, our communities, and our partners.”

Under the Law Center’s Holacracy-based model, workers are not identified with their roles or job titles. Any given worker will occupy any number of roles, and those responsibilities will change over time based on need and preference. This system resists role-based hierarchy and pay differentials while promoting continual learning (“upskilling”) and rotating responsibility for less desirable tasks. In addition, the Law Center’s meetings are highly structured so as to include input from all participants and avoid dominant personalities from taking up too much space. Among the Law Center’s policies are equal pay for all staff (indexed to a living wage) and a 30-hour workweek. Whether you think such policies sound amazing or impracticable, the key is that they exist because the workers themselves have agreed upon them. If something does not work, the issue can be addressed democratically.

The democratic organization of nonprofits is both possible and, in many cases, more desirable for workers. So why is it so uncommon? One barrier to worker self-direction in nonprofits is a legal one: unlike a worker cooperative – where the board of directors may be identical to the staff or an elected subset thereof – a nonprofit board may face legal restrictions regarding the number of directors who are paid staff. Often, only certain kinds of power can be delegated, and then only on a provisional basis (probably best accomplished by renewable board resolutions.) This is a legal gray area where neither statutes nor case law yield a totally clear picture of what is allowed. What is clear is that nonprofits are currently closer to capitalist firms than they are to worker cooperatives in their ability to guarantee democratic governance. In both cases, the board has the power to scrap democratic practices if it sees fit.

The point of the above restrictions on nonprofit boards is to prevent interested parties from using the organization for direct personal gain. This is a good intention. Yet this also precludes the development of radically democratic structures that undermine hierarchy and thereby foster greater integrity. Giving control of the organization over to the parties who are the most interested – both in the sense of drawing a salary and being close to the work – may actually produce the most efficient, healthiest, and accountable organizations. Or at least this is an open question that needs legal breathing room to explore.

Let us explore it. Worker self-direction will not succeed equally in all nonprofits, just as worker cooperatives are not the only model to consider in a for-profit business. One should not dive in without consideration. However, so few of us are trying these options at all, including those who devote their lives to promoting democracy and equity outside the walls of the workplace.

Lucas McGranahan is an independent scholar and nonprofit professional located in Chicago, Illinois. He is the author of Darwinism and Pragmatism (Routledge, 2017). Contact: [email protected]