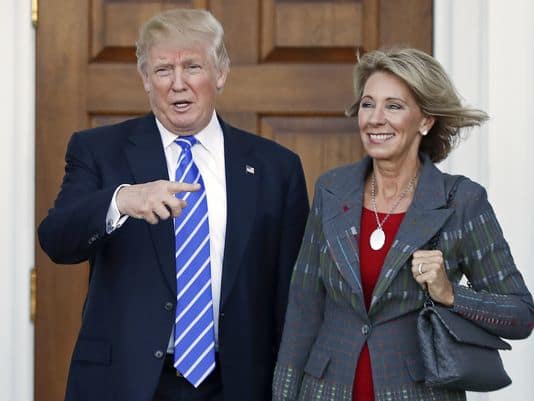 The process has come full circle and the inauguration is complete. President Trump’s first two cabinet members have been confirmed by the Senate, Gen. James Mattis leading the Department of Defense and Gen. John Kelly heading Homeland Security. There is controversy surrounding mostly all of Trump’s picks for various positions, but the one I wish to focus on is his choice to head the Department of Education, Betsy DeVos. DeVos has been a vocal supporter of charter schools and, if chosen to head the department, could drastically change the landscape of our educational system in a number of different ways.

To contextualize this issue locally, last May, the Bloomfield Board of Education denied an application request for the establishment of the Frank Sinatra Charter School of the Arts, stating the costliness of the project as well as the fact that Bloomfield’s educational system already meets the stated mission of the charter school.

Bloomfield's Board of Education president, Dan Anderson, reiterated some common refrains related to charter schools generally: the lack of oversight and accountability, the firing of teachers at will, and their vehement opposition to unions. And the way that charter funding operates, the district itself would be picking up the tab, an estimated $3 million, while the state bears no fiscal responsibility.

One could view the charter school movement along the lines of the shift toward privatization of public resources more generally. President Trump has stated his initiative to reallocate $20 billion to school choice by reprioritizing already existing federal funds. This philosophy falls in line with not only that of Betsy DeVos, but her entire family, she and her husband have some more-than-dubious ties to institutions that have hurt America’s educational apparatus.

They are investors in the student debt collection agency Performant Financial Corp. through their private investment firm RDV Corporation and their ties to LMF WF Portfolio, an LLC who provided Performant with much of its $147 million loan, as explained by a Washington Post article. Ottawa Avenue Private Capital, an investment fund owned by DeVos and her husband, is listed as LMF WF’s resident agent. Performant does extensive business with the U.S. Department of Education. The DeVos family’s intimate relationship with education finance makes her appointment particularly dangerous with conflicts of interest that are glaring and conspicuous.

And the proverbial “revolving door” between business and government might as well lead right to the DeVos’ living room. Her brother is Erik Price, founder of Blackwater USA, the private military services contractor involved in the Nisour Square shootings in Baghdad back in 2007. Prince has been involved in federal investigations for alleged weapons smuggling into Iraq as well as the murder of individuals investigating Blackwater under federal mandate. Prince is crucial to Trump’s transition team, advising him closely on appointments to departments. Husband Richard Marvin DeVos Jr. is a multi-billionaire who inherited from father Amway, a consumer goods distributor. He was former Republican gubernatorial candidate - notably the richest person to run for governor in Michigan’s history.

DeVos' private business interests are diametrically opposed to those of the 40 million Americans who are mired in student debt. And with the $1.2 trillion dollars that makes up our student debt growing every year, more young people are postponing their ascent into adulthood. Having to siphon a larger portion of their income to pay off loans, people have to forego purchases that typically drive a healthy economy and indicate growth and rising prosperity.

DeVos’ senate confirmation hearing revealed suspicions of her relationship with the radical religious right. Appearing on Democracy Now!, investigative journalist Jeremy Scahill noted the DeVos and Prince families were both instrumental in providing the “seed” money for radical Christian organizations in the nineties, often with deep-seated anti-LGBTQ ideologies. Groups like Focus on the Family and Family Research Council are most notable. Scahill repeated what DeVos’ had once declared, stating “… her vision for education in the U.S. is ‘to bring the Kingdom of God.’"

Scahill continued, "I don’t know if Betsy DeVos has read the first amendment, but what she wants to do is funnel public funds into religious schools.”

A detailed analysis on charter schools published by the Economic Policy Institute noted that, “Numerous analyses have found chartering to lead to an imbalanced distribution of students by race, income, language proficiency, and disability status.” Furthermore, “pension and health care costs are systemwide concerns that cannot be ignored by shifting students and public dollars across sectors.” Charter schools seem to bring up more questions than they answer.

Considering the positions of this new administration, one must ask: Is it public stewardship or private interests that will be influencing policy? If evidence is pointing toward the latter, we must remain vigilant and vocal in opposing all such decisions that will negatively affect our nation and our communities’ welfare.