Inequality in the United States is now so obscene that it’s impossible, even for mainstream economists, to avoid the issue of surplus.

Consider the two charts below. On the left, income inequality is illustrated by the shares of pre-tax national income going to the top 1 percent (the blue line) and the bottom 90 percent (the red line). Between 1976 and 2014 (the last year for which data are available), the share of income at the top soared, from 10.4 percent to 20.2 percent, while for most everyone else the share has dropped precipitously, from 53.6 percent to 39.7 percent. 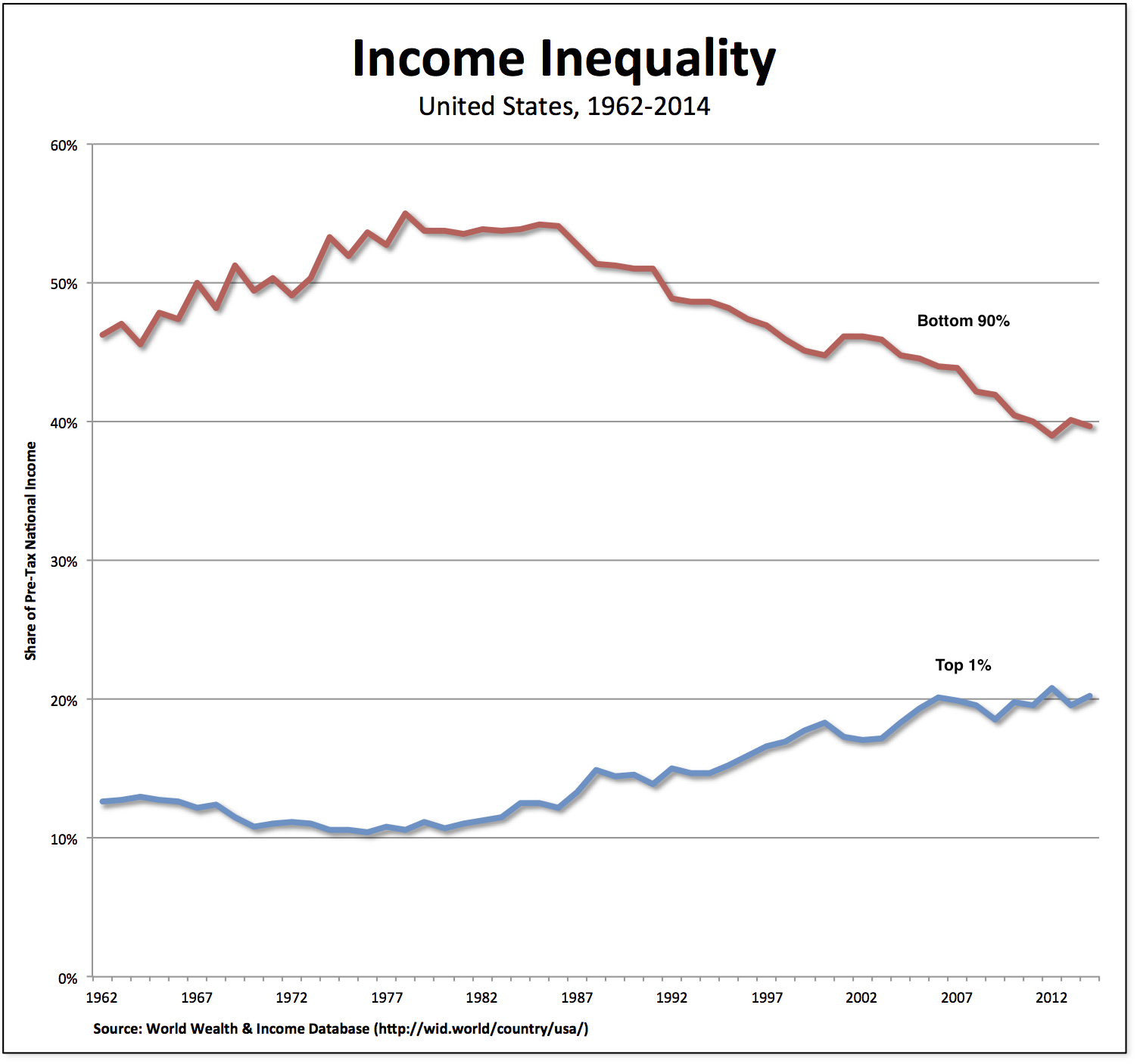 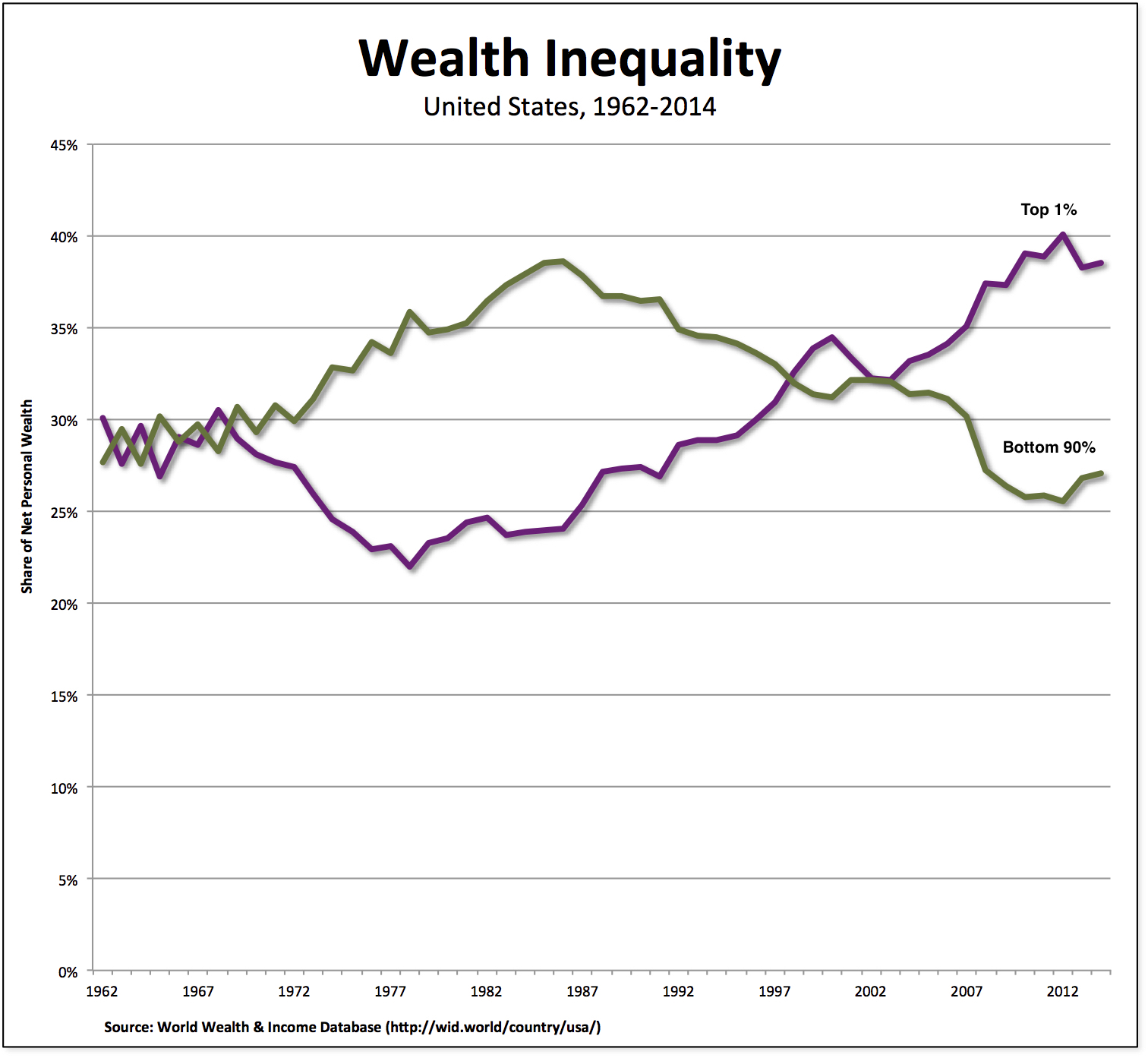 The distribution of wealth in the United States is even more unequal, as illustrated in the chart on the right. From 1976 to 2014, the share of wealth owned by the top 1 percent (the purple line) rose dramatically, from 22.9 percent to 38.6 percent, while that of the bottom 90 percent (the green line) tumbled from 34.2 percent to only 27 percent.

The obvious explanation, at least for some of us, is surplus-value. More surplus has been squeezed out of workers, which has been appropriated by their employers and then distributed to those at the top. They, in turn, have managed to use their ability to capture a share of the growing surplus to purchase more wealth, which has generated returns that lead to even more income and wealth—while the shares of income and wealth of those at the bottom have continued to decline.

But the idea of surplus-value is anathema to mainstream economists. They literally can’t see it, because they assume (at least within free markets) workers are paid according to their productivity. Mainstream economic theory excludes any distinction between labor and labor power. Therefore, in their view, the only thing that matters is the price of labor and, in their models, workers are paid their full value. Mainstream economists assume we live in the land of freedom, equality, and just deserts. Thus, everyone gets what they deserve.

Even if mainstream economists can’t see surplus-value, they’re still haunted by the idea of surplus. Their cherished models of perfect competition simply can’t generate the grotesque levels of inequality in the distribution of income and wealth we are seeing in the United States.

That’s why in recent some of them have turned to the idea of rent-seeking behavior, which is associated with exceptions to perfect competition. They may not be able to see surplus-value but they can see—at least some of them—the existence of surplus wealth.

The latest is Mordecai Kurz, who has shown that modern information technology—the “source of most improvements in our living standards”—has also been the “cause of rising income and wealth inequality” since the 1970s.

For Kurz, it’s all about monopoly power. High-tech firms, characterized by highly concentrated ownership, have managed to use technical innovations and debt to erect barriers to entry and, once created, to restrain competition. 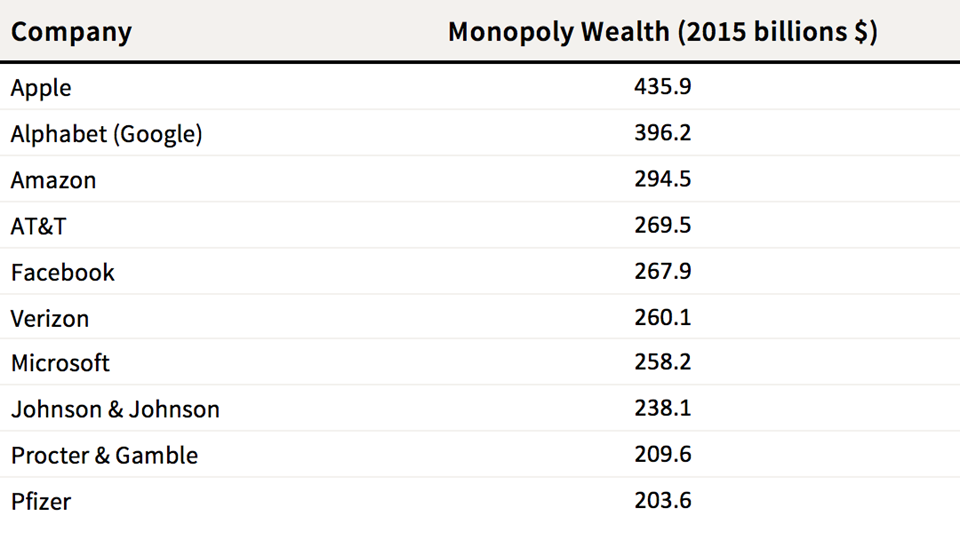 "One part of the answer is that rising monopoly power increased corporate profits and sharply boosted stock prices, which produced gains that were enjoyed by a small population of stockholders and corporate management. . .

Since the 1980s, IT innovations have largely been software-based, giving young innovators an advantage. Additionally, “proof of concept” studies are typically inexpensive for software innovations (except in pharmaceuticals); with modest capital, IT innovators can test ideas without surrendering a major share of their stock. As a result, successful IT innovations have concentrated wealth in fewer – and often younger – hands."

In the end, Kurz wants to tell a story about wealth accumulation based on the rapid rise of individual wealth enabled by information-based innovations (together with the rapid decline of wealth created in older industries such as railroads, automobiles, and steel), which differs from Thomas Piketty’s view of wealth accumulation as taking place through a lengthy intergenerational process where the rate of return on family assets exceeds the growth rate of the economy.

The problem is, neither Kurz nor Piketty can tell a convincing story about where that surplus comes from in the first place, before it is captured by monopoly firms and transformed into the wealth of families.

Kurz, Piketty, and an increasing number of mainstream economists are concerned about obscene and still-growing levels of inequality, and thus remained haunted by the idea of a surplus. But they can’t see—or choose not to see—the surplus-value that is created in the process of extracting labor from labor power.

In other words, mainstream economists don’t see the surplus that arises, in language uniquely appropriate for Halloween, from capitalists’ “vampire thirst for the living blood of labour.”