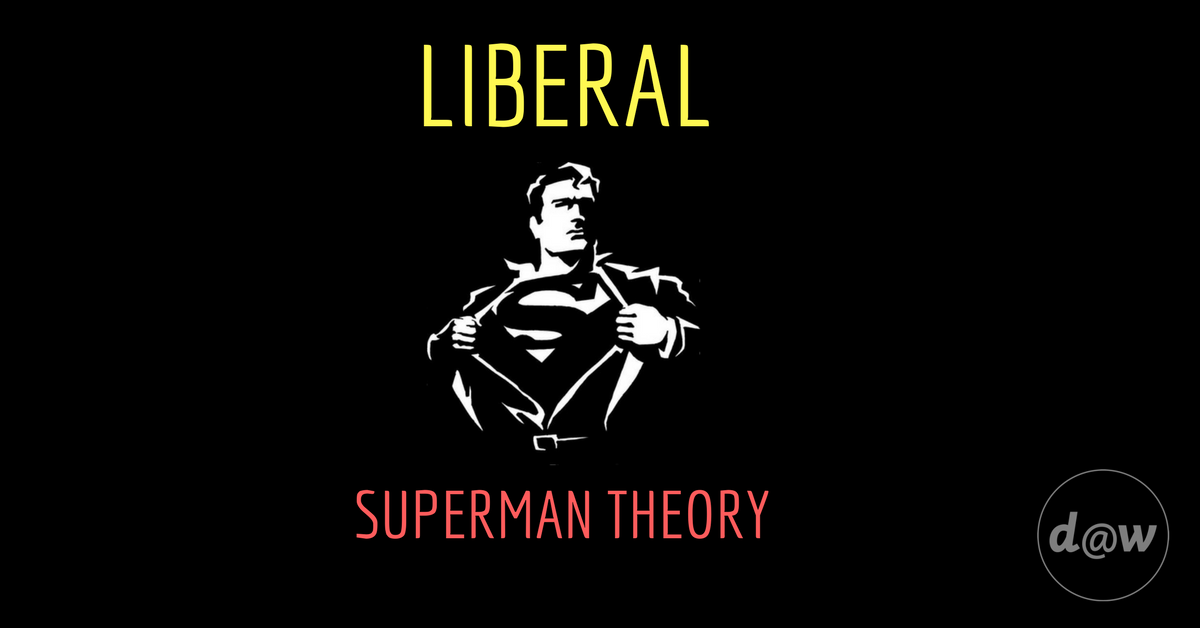 I’ll admit, there are times when I regret the fact that I’m a relativist. Wouldn’t it be nice, I say to myself on occasion, to be able to claim—beyond a shadow of a doubt, to my students, colleagues, or readers of this blog—that something or other (neoclassical economics or capitalism or name your poison) is wrong and that the alternative (Marxian economics or socialism or what have you) is absolutely correct.

But then I read a defense of capital-T truth—such as David Roberts’s attack on the alt-right and fake news and his presumption that the liberal mainstream is uniquely capable of upholding “truth, justice, and the American way”—and I thank my lucky stars that I don’t have to make such outlandish, embarrassing arguments. Fortunately, my relativism means I’m not saddled with the mainstream liberals’ delusion that they have, if not God, at least Superman on their side.

I’ve been over this epistemological terrain before (e.g., here, here, and here). But it seems, in the current conjuncture, mainstream liberals—in their zeal to attack Donald Trump and the right-wing media’s defense of his administration’s outlandish claims about a wide variety of issues, from climate change to the Mueller investigation—increasingly invoke and rely on an absolutist theory of knowledge. And then, of course, claim for themselves the correct side in the current debates.

As Roberts sees it, the United States

"is experiencing a deep epistemic breach, a split not just in what we value or want, but in who we trust, how we come to know things, and what we believe we know — what we believe exists, is true, has happened and is happening.

The primary source of this breach, to make a long story short, is the US conservative movement’s rejection of the mainstream institutions devoted to gathering and disseminating knowledge (journalism, science, the academy) — the ones society has appointed as referees in matters of factual dispute.

In their place, the right has created its own parallel set of institutions, most notably its own media ecosystem."

Consider the assumptions built into those statements for a moment. Roberts believes that society has appointed a unique set of mainstream institutions—journalism, science, the academy—to serve as referees when it comes to adjudicating the facts in play. Nowhere does he discuss how, historically, those institutions came to occupy such an exalted position. Perhaps even more important, he never considers the disputes—about the facts and much else—that exist among journalists, scientists, and academics. And, finally, Roberts never mentions all the times, in recent years and over the centuries, the members of those institutions who got it wrong.

What about the reporting on the weapons of mass destruction in Iraq? Or the Tuskegee Study of Untreated Syphilis in the Negro Male? Or the university professors and presidents, at Yale, Harvard, and elsewhere, who supported and helped devise the U.S. war in Vietnam?

There is, in fact, good reason not to simply accept the “facts” as gathered and disseminated by mainstream institutions. Historically, we have often been misled, and even mangled and killed, by those supposed facts. And, epistemologically, the members of those institutions—not to mention others, located in different institutions—produce and disseminate alternative sets of facts.

Maybe that’s Roberts’s problem. He actually thinks facts are gathered, as if they’re just out there in the world, waiting to be plucked, harvested, or dug up like fruits and vegetables by people who have no particular interest in which facts find their way into their baskets.

I have no doubt that many journalists, scientists, and academics “see themselves as beholden to values and standards that transcend party or faction.” But that doesn’t mean they actually operate that way, somehow above and apart from the paradigms they use and the social influences exerted on them and the institutions where they work.

As far as Roberts is concerned, only the “far right” rejects the “very idea of neutral, binding arbiters” and adheres to a “tribal epistemology.” And mainstream liberals? Well, supposedly, they have the facts on their side.

For Roberts, it’s either epistemic authority or nihilism. Absolute truth or an “epistemic gulf” that separates an “increasingly large chunk of Americans,” who believe “a whole bunch of crazy things,” from liberal Democrats.

What Roberts can’t abide is that we “live in different worlds, with different stories and facts shaping our lives.” But, from a relativist perspective, that’s all we’ve ever had, inside and outside the institutions of journalism, science, and the academy. Throughout their entire history. Different stories and different sets of facts.

Clearly, Roberts mourns the passing of a time of epistemological certainty and universal agreement that never existed.

Roberts instead should mourn the effects of a Superman theory of knowledge that got him and other mainstream liberals into trouble in the first place. In recent years, they and their cherished facts simply haven’t been persuasive to a large and perhaps growing part of the population.

And the rest of us are suffering the consequences.