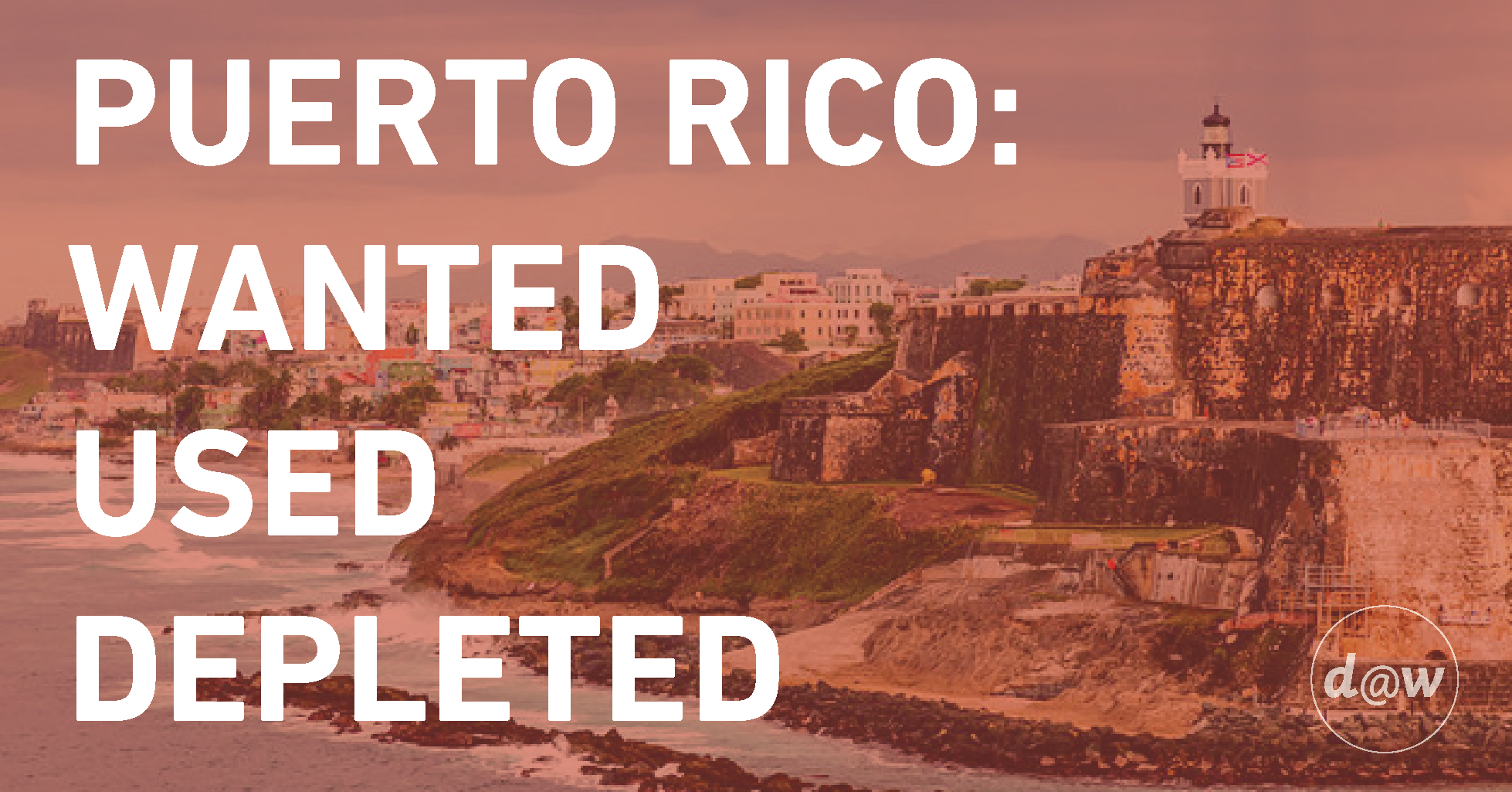 This article has also been translated into Spanish and Italian.

Since Governor Alejandro García Padilla of Puerto Rico announced that its debts were not payable, mainstream media has shown a great interest in the archipelago. Combine a government debt between $70 and $73 billion, a shrinking population of about 3.5 million American citizens, and a subordinate political status, this US territory is at an unprecedented moment in its history. With all the attention Puerto Rico is receiving, most people are left scratching their heads, wondering how this economic crisis came about.

This bewilderment is understandable when one considers that Puerto Rico is little understood beyond its reputation as a great tourist destination. Though its history with the US stretches back to 1898, most of the US population has only recently become aware of Puerto Rico’s existence. As a result, there is an incomplete picture of Puerto Rico's state of affairs in relation to the US, making it near impossible to understand why the current economic crisis happened and why it matters. A deeper understanding of the issue is needed, and the only way to achieve this is by starting at the beginning.

Towards the end of the nineteenth century, the "manifest destiny" mindset predominated in the US, motivating it to look beyond its own borders for new territories to claim. The US needed a strong naval presence to establish maritime bases in certain strategic points and passage through the most important oceanic routes. Two of those routes were the soon-to-be Panama Canal and the proposed Nicaragua Canal, the primary passageways between the Pacific and Atlantic oceans. Either canal would allow the US to stop splitting its navy between two coasts (not to mention bring major economic opportunities). But control of the canals was not itself enough to guarantee unlimited access at all times; it was also necessary to control the routes that connected to them, and any adjacent regions. Puerto Rico was a necessary piece in achieving this goal. On July 25, 1898 (during the Spanish American War) the US invaded Puerto Rico. That same year, when the Treaty of Paris was signed, Spain (as Puerto Rico's current colonial master) was forced to turn it over to the victorious US. The new superpower now had control of one of its most wanted territories. Captain Alfred Thayer Mahn stated Puerto Rico's importance most clearly when in 1899 he wrote:

Puerto Rico, considered militarily, is to Cuba, to the future Isthmian canal, and to our Pacific coast, what Malta is, or may be, to Egypt and the beyond; and there is for us the like necessity to hold and strengthen the one, in its entirety and in its immediate surroundings, that there is for Great Britain to hold the other for the security of her position in Egypt, for her use of the Suez Canal, and for the control of the route to India.

Of course, the people of Puerto Rico had absolutely no say in any of the historical events briefly recounted here, especially the US's intervention. Its destiny was to be determined by the economic and military desires of the world's most powerful nation and its unilateral actions. It was as one picks an apple from a tree: you see the one you want and take it. The apple has no say in the matter.

Shortly after the US’s successful invasion in 1899, Puerto Rico was hit by Hurricane San Ciriaco. One of the worst in its history, the hurricane destroyed about 90% of its coffee crops. Not long after, the US (Puerto Rico's new colonial master) outlawed all Puerto Rican currency and decided the peso would be worth only sixty American cents. Almost overnight, the archipelago's population lost 40% of their money. On March 4 of the following year, Congress enacted the Hollander Law which, while allowing Puerto Rico to have a Resident Commissioner in Washington with no vote, imposed on local farmers additional taxes that worsened an already difficult financial situation. Banks immediately took advantage of this situation and began giving out loans at astronomically high interest rates. This caused most of the farming population to default on their payments, causing them to lose their land. After foreclosing, the lands were used to produce sugarcane, turning Puerto Rico's once diverse agricultural industry into a mono-crop economy. Sugarcane would be processed to make sugar, a highly profitable commodity:

United States investors replaced many of the established European investors on the island. Huge sugar mills such as the Guánica Central and Fajardo Sugar were established. The increase in the price of sugar on the world markets, as well as the investment of capital, made Puerto Rico into one of the principal producers of sugar internationally. Despite this, the sugar industry required a large number of laborers who were submitted to conditions similar to those of slavery.

Here we see the beginning of a pattern that would be repeated to this very day: big capitalist interests arrive from outside the archipelago, establish businesses, and reap huge profits that do not benefit the people of Puerto Rico but instead leave them picking up the slack. A great number of absentee owners enjoyed this form of business, while the working class in Puerto Rico lived in misery. Bailey Wallys Diffie described the sugar industry best when he wrote in 1931:

Nothing has been more disappointing or deceptive to Porto Rico than the sugar business. The superficial glance at the pyramiding production in tons and dollars has made it seem a veritable cascade of riches. The millions made from sugar have given the false impression of a prosperous Porto Rico, when the truth is that the majority of the people of the Island [sic] are actually being forced further into debt day by day. This is now known. The industry does not belong to natives, but to outsiders. The profits are not enjoyed by those who make them possible, but by those who never see Porto Rico. The wages, which in bulk are so large, are now known to be miserably inadequate for the sustenance of life. Sugar has supplanted food crops by usurping the fertile valley lands. Sugar interests have taken charge of the legislature and of the Bureau of Insular Affairs, and rendered the people impotent to help themselves. However glittering the sugar industry may appear to outsiders, the Porto Ricans know that it has not paid. “Sugar Economy” has proved to be “bad economy” for Porto Rico.

The sugar industry is only one of the many examples of how capitalist interests have objectified Puerto Rico, reducing it to another property to be exploited until nothing was left. Even the people of Puerto Rico were managed to benefit US capitalist interests. A prime example was the sterilization of about 1/3 of Puerto Rican woman in order to “...catalyze economic growth, and respond to depression-era unemployment. Both U.S. government funds and contributions from private individuals supported the initiative.” Puerto Rico became a “thing” to be used to accomplish the highest of all capitalist objectives: profit.

And boy, did it work.

The current economic crisis of Puerto Rico is the result of tax policies that have made it very attractive to foreign investors while neglecting the local economy. The most important tax policy in Puerto Rico is the Jones-Stafroth Act of 1917. This law is key to understanding Puerto Rico's current crisis. Why? Apart from forcing Puerto Rico to use the US Merchant Marine to transport goods to the US, Section 3 of the bill established that Puerto Rico could issue triple-exempted bonds. That's right: Congress - not Puerto Rico - decided almost one hundred years ago that it was a good idea to have Puerto Rico issue bonds on which it could not charge taxes. Curiously enough, this fact is often left out of the discussion regarding Puerto Rico's economy and still has rarely been considered.

The other statute often mentioned, but rarely discussed, is Section 936 of the Internal Revenue Code. In 1976, this “economic incentive” made US capitalist corporations exempt from federal taxes on income earned in Puerto Rico. This provision became the cornerstone of Puerto Rico's economy as it was a lighting rod for investors from the US. It was a very sweet deal for the private sector: all they had to do was place a subsidiary in Puerto Rico so that the profits they generated could be paid to the parent companies as dividends, untouched by the US's corporate tax and deductible from Puerto Rico's corporate income tax. Local legislation also fueled aggressive tax incentives that favored exterior capitalist interests:

Throughout the modern economic history of Puerto Rico, one of the central drivers of its economic growth has been the United States tax code. For over eighty years, the federal government granted various tax incentives to U.S. corporations operating in Puerto Rico, in order to spur the industrialization of the island. […] In addition to section 936, the Puerto Rican corporate tax code gave significant incentives for U.S. corporations to locate subsidiaries on the island. Puerto Rican tax law allowed a subsidiary more than 80% owned by a foreign entity to deduct 100% of the dividends paid to its parent. As such, subsidiaries in Puerto Rico had no corporate income tax liability as long as their profits are distributed as dividends.

Some may point out that in 1996 President Bill Clinton signed legislation that would phase out Section 936 by 2006, leaving Puerto Rico subsidiaries of US corporations exposed to the same taxes as any other foreign subsidiary. But here lies one of the greatest "coincidences" in this economic debacle: 2006 marks the start of the archipelago's economic recession. Within the past ten years, Puerto Rico has suffered a sustained decrease in its GDP Annual Growth Rate.

In the face of this grim economic picture, what measures have been put in place to avoid a growing crisis? Enter PROMESA (HR5278), which in a delightful twist of irony, is Spanish for “promise.” Puerto Rico has already experienced a series of harsh policies that placed most of the economic burden on the people's backs: massive layoffs, skyrocketing utility rates, and the highest sales tax in all of the US, among others.

But PROMESA is special. In addition to reducing the minimum wage of Puerto Ricans between the ages of 20 and 24 to just $4.25, this legislation establishes an oversight board that would essentially take over by allowing it to override decisions made by the Puerto Rican government. Most important of all, it will have the power to structure Puerto Rico's debt, affecting the lives of millions without their say.

In essence, PROMESA is the quintessence of capitalism. It allows a small group of people to decide amongst them the future of the rest of us; with no say in the decision making process or a right to elect the board members. Puerto Rico's people will be relegated to mere spectators, watching their very value as human beings reduced to numbers on a chart. That's a promise.

Andrew Mercado-Vázquez is a law student in San Juan and a group lead for Democracy at Work's Puerto Rico Action Group ([email protected]).