As it turns out, socialism is increasingly obvious for folks on this side of the pond, too. Like Bernie Sanders. And Mark Workin and Melissa Young, who made the film Shift Change. And Richard Wolff, through Democracy at Work.

Now they’re joined by Shannon Rieger, a recipient of the Janice Nittoli “Forward Thinking” Award from The Century Fund. 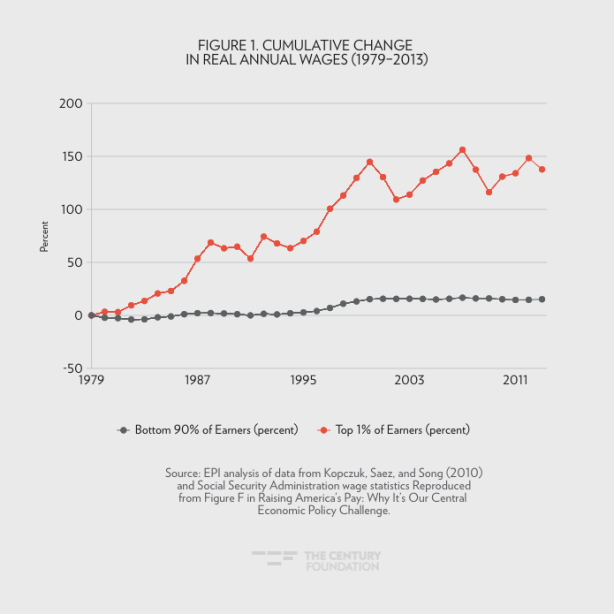 Rieger’s argument is that, in the face of growing inequality (such that “the top 1 percent wage has increased by 138 percent since 1979, [while] the wages of the entire bottom 90 percent of earners have grown by the comparatively meager margin of just 15 percent—and an even more unequal distribution of wealth”), it’s imperative that the United States “develop policies that not only mitigate existing economic inequality and poverty, but that actually reverse these trends for the long term.”

And her proposed solution? Enterprises that are owned and managed by their employees.

"By creating a policy environment to support and promote democratic employee-owned businesses, the United States could promote a more equitable employment system and a more just distribution of wealth. Doing so would not only help the country recover from the recent economic devastation of the Great Recession, but also begin to reverse the deep wealth and income disparities that have plagued American workers and families for decades."

Worker-owned cooperatives (which, across the world, employ more than 250 million people, and in 2013, generated $2.95 trillion in turnover) are a particular form of democratic employee-owned business that Rieger considers to have particularly rich potential in the United States.

But they need support, to “help grow the sector to scale.” So, as Rieger explains,

Using examples from around the world (including the Marcora Law in Italy) Rieger makes the obvious case for the growth of democratic worker-owned enterprises in the United States.*

Worker-owned enterprises, as a key feature of a socialist transition from capitalism, are certainly obvious to me.

*The Marcora Law, which was passed in 1985, offers Italian workers an array of financial support options and a “right of first refusal” opportunity to purchase and re-launch troubled businesses as worker-cooperatives. As Rieger explains,

"a U.S. worker-buyout policy modeled after the Marcora Law should become a component of federal-level policy framework for worker-cooperatives. By creating federal legislation that recognizes the worker-owned cooperative business as a distinct form of democratic employee-ownership, and that aligns existing state-level incorporation codes and the worker-ownership service provider network under universal regulatory guidelines, the United States could make a meaningful, effective commitment to expanding the democratic worker-ownership sector."