System Change, or There and Back Again: Capitalism, Socialism, Fascism 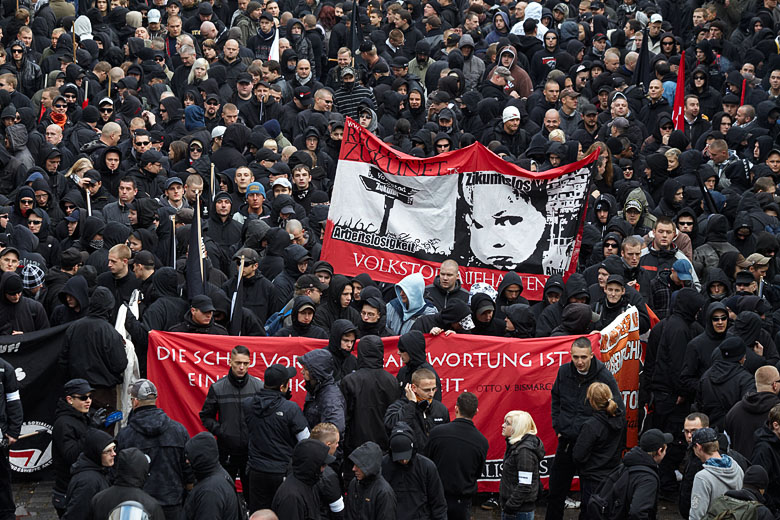 Societies today where capitalist economic systems prevail confront government gridlock. Facing serious and deepening economic problems, even when their leaders can sometimes agree on particular policies, the policies are frequently inadequate to solve the problems. Therefore, questions challenging capitalism occur now more often and more influentially than they have for many decades. Renewed interest in systemic changes, both socialist and fascist, agitates many societies.

Historically, capitalism's problems often led its leaders (economic and political) to make adjustments and changes in income and wealth distributions, government regulations affecting enterprises and markets, international relations, and so on. For example, progressive income taxes and minimum wages were legislated, anti-monopoly rules were enacted, and tariffs and foreign wars were imposed. Sometimes, capitalism's leaders lacked the capacity to execute such solutions or else those solutions proved insufficient. Then, more systemic changes arrived on social agendas. The two most important of such systemic changes were traditional socialism and fascism. These were achieved by peaceful or violent means, by parliamentary reforms or by revolutions, depending on the circumstances of time and place.

Capitalism's deepest problems sooner or later drove political and economic groups within its national boundaries to pursue what they saw as systemic solutions. By that, they meant first and foremost changing the state and integrating it much more closely with enterprises (factories, offices and stores). Transitions to traditional socialism and fascism have historically been the major different, alternative forms of such systemic solutions. Neither has yet proved a durable solution. Modern societies have returned from fascist or traditional socialist periods to forms of capitalism that re-established a greater distance between enterprises and the state. Yet those forms of capitalism keep generating business cycles and inequalities that eventually become the serious problems that bring yet another turn toward traditional socialism or fascism. The deepening problems of the early 21st century raise the distinct possibility of another cycle of fascist and traditional socialist experiments or, as we shall show, perhaps a genuinely new solution.

In the traditional socialist solution, problems of unemployment, economic stagnation and mounting social conflict also prompt massive state intervention. However, socialist state intervention has very different goals and modalities especially in relation to private capitalist enterprises. In the cases of socialist governments in Soviet Russia (USSR) and the People's Republic of China (PRC), the forces that brought them into power drove them to dispossess most private owners of capitalist enterprises, thereby socializing them. They removed most private capitalists from their positions within those enterprises. In their place, traditional socialist governments placed one set of state officials as enterprise operators. Those state officials were to operate the socialized means of production for the benefit of the whole people and as their agent. Traditional socialists understood that change of ownership of the means of production as a central definition and component of socialism. Socialist state officials thus replaced the capitalist enterprises' boards of directors formerly elected by private owners of the means of production. In the case of non-capitalist means of production (owned and operated by individual peasants, crafts persons etc.), individual private property was often preserved or even expanded (as when the post-1917 Soviet government distributed land as private property to peasants).

Once in power, traditional socialists also assigned another set of government officials the tasks of planning and administering the distribution of productive resources and outputs. Centralized plans sometimes replaced market exchanges as the economy's mechanism of distribution. More typically, those plans usually included major segments of the economy where market exchanges continued to serve as distribution mechanisms. Prices in markets were sometimes set by central planners and sometimes allowed to be determined by demand and supply conditions. Traditional socialist government revenues (from state enterprise profits, taxes etc.) were spent on priorities such as economic growth, military security and public services (education, health care, and so on).

German fascism lasted 12 years, while Italian fascism endured twice as long. The USSR lasted 70 years until its traditional socialism collapsed in 1989, while the PRC continues in its 65th year. Recently, the PRC permitted and enabled a vastly enlarged private capitalist sector. In that way, the PRC moves toward Western European-style socialism. The latter entails a largely private capitalist economic system: private ownership of the means of production prevails with markets as the chief means of distributing resources and products. The government owns and operates some industrial groups (perhaps the "commanding heights" of the economy), usually imposes fairly high taxes to fund considerable government services, regulates markets significantly and manipulates fiscal and monetary policies to manage capitalist cycles via an active Keynesian interventionism.

Both fascism and traditional socialism have their left and right forms. Left forms will usually be the more willing to lessen inequalities of wealth and income, limit nationalism and war, and tolerate secularism. Right forms will usually be less interested in and more tolerant of unequal wealth and income distributions, and more likely to celebrate nationalism, allow or pursue military engagements, and embrace conservative religion.

In various forms, growing masses of people in Western Europe, North America and Japan now confront a capitalism whose long-term, historic changes present deepening problems while diminishing the resources needed for solutions. The capitalism born and developed first in those areas concentrated its production and distribution facilities there from the 1750s to the 1970s. That capitalism condemned the "Third World" to struggle for centuries to escape the awful effects of its global division of labor and consumption.

Over the same years, in protracted struggles, workers in capitalism's centers forced capitalists to raise real wages as partial compensation for rising levels of exploitation on the job and growing wealth and income inequalities. But by the 1970s, jet travel and modern telecommunications enabled the profitable relocation of capitalist enterprises from Western Europe, North America and Japan to much lower wage nations in Asia, Latin America and Africa. The jobs, benefits, security of employment and wage incomes in the former regions are falling, while they are rising in the latter regions. The combined result is a global decline in labor's share of total income, record corporate profits and stock market booms alongside deepening economic inequality and problems for Western Europe, North America and Japan. Exemplifying this historic process in the starkest terms, Detroit, once the showplace of Western capitalism, is now a largely abandoned economic wasteland. It lost well over half the population it had in the 1960s and is undergoing the largest urban bankruptcy in US history.

Such a capitalist history provokes questions and challenges to capitalism. Piecemeal reforms, marginal electoral shifts, and reformulated monetary and fiscal policies seem too little and too late for problems that go to the heart of capitalism as a system. Fascism and traditional socialism are returning to popular agendas, at first in fits, starts - and many disguises. Both have deep antipathies to overcome or maneuver around. In Greece, mass support for conventional, center-right and center-left political parties evaporates in favor especially of a new leftist party, Syriza, wavering between traditional socialism and new socialist directions. In part to counter this leftward political surge, a fascistic alternative (Golden Dawn) arises in Greek politics. The development is sharpest and clearest in Greece likely because the crisis has been worse there for the mass of people than elsewhere. But similar evolutions are underway in other European countries (e.g. the French socialist party's surge provokes both action to its left as the party's anti-austerity commitments fade, and action on its right with rising votes for the fascistic National Front). In the United States, too, the Tea Party and Occupy movements illustrate comparable developments, albeit much less developed and less self-conscious.

In the more moderate traditional socialisms of Western Europe, the crisis since 2007 exposed their capitulation to dominant neoliberal capitalism. In Greece and now again in France, traditional socialist parties rode into power as enemies of austerity. European governments had mostly responded to the capitalist crisis with bailouts of banks, large corporations and stock markets, and temporary, debt-financed stimuli. These were to be paid for by austerity (higher taxes and lower social spending) imposed on the mass of people. Once in power, traditional socialist parties proved unable or unwilling to stop austerity, let alone reverse that policy and make the capitalists who produced the crisis pay to overcome it. Such failures destroyed the Greek Socialist Party and now threaten, likewise, the French, among others. Traditional European socialism thus joins the Soviet model in declining as an option for those disaffected by capitalism.

So perhaps the key question becomes whether genuinely new and different sorts of fascism and socialism are or could be emerging. Will they be means for people in Western Europe, North America and Japan to escape the fate of a capitalism leaving for new, more profitable fields for investment? Will new fascisms and socialisms shape those regions' struggles against the new global division of labor organized by capitalism as it moves production to the East and the South?

In the United States, larger capitalists increasingly buy the two major political parties, their apparatuses and candidates, and make office holders dependent upon armies of their lobbyists and their immense public relations budgets. A gradual merger of capitalists and government is thereby coming into being, one that may formalize new leading institutions to overcome capitalism's current problems. The biggest problem for such a new fascistic formation would be the mass base it would need to cultivate, organize and sustain. Fundamentalist religions might play such a role. Yet the nagging question remains: Would not the global imperatives of the capitalist partners in such a fascism continue the relocation of production that lies at the root of such societies' deepening economic problems?

In the United States, a new kind of socialism may also be emerging. It is based on an insistence that the macro-dimensions of traditional socialism - an emphasis on ownership of the means of production and economic planning - be grounded on and interdependent with a micro-level reorganization of enterprises. Enterprises are to be democratized, ending the typical top-down hierarchical capitalist organization (major shareholders select the board of directors that hires the managers and mass of laborers and makes all the key enterprise decisions). Workers self-directed enterprises (WSDEs) would become the mass social and economic base where wealth is generated and revenues are provided to the state. Conjointly with democratically organized residential communities that are interdependent with the WSDEs, local decisions would be co-determined and all state actions held accountable. The state would facilitate economic, political and cultural coordination among WSDEs and residential communities, but the state power arising from that facilitation function would be ultimately determined by, accountable to and balanced by the economic and political power organized horizontally at the base of society.