The Performance of Worker Cooperatives vs. Capitalist Firms 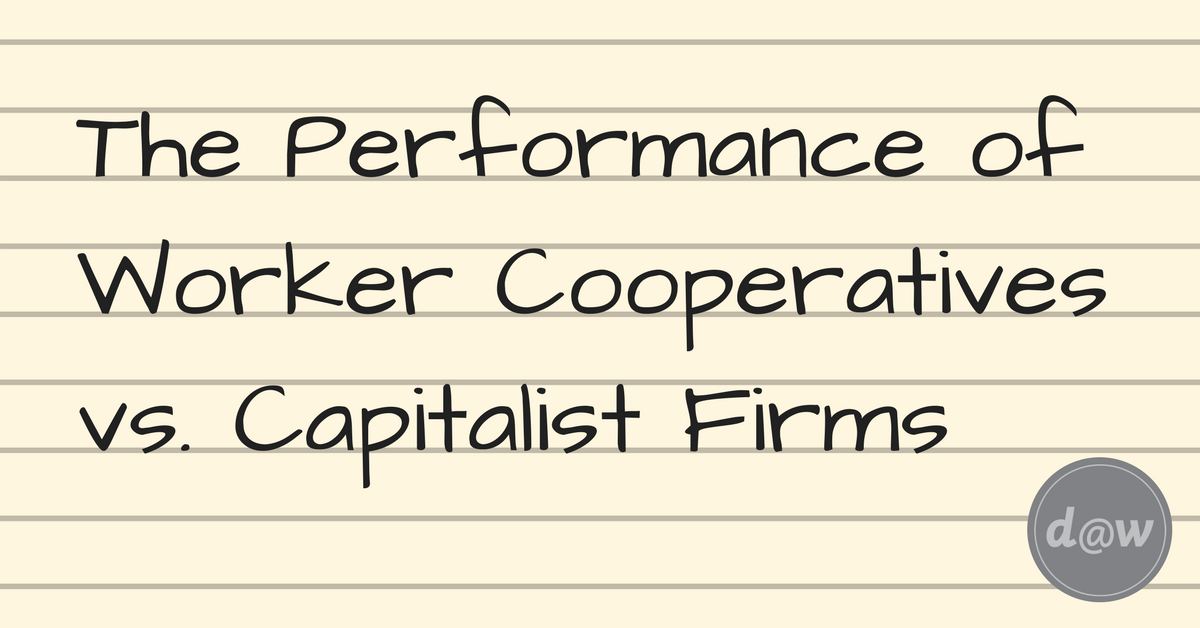 In this careful and robust examination of all of the evidence currently available, Virginie Pérotin, the leading expert on the economics of employee ownership and worker cooperatives, compares the performance of worker cooperatives to that of conventional capitalist firms.

One of the virtues of Pérotin’s analysis is her key insights into the methods that should be used to compare these two types of firms. Rather than using the traditional measures of profits or return on investment, she focuses on productivity and firm survival.

On productivity, her analysis shows that,

On the issue of survival, Pérotin shows that both of the main concerns about the institutional stability of worker cooperatives have solid solutions that have been adopted by a number of cooperatives around the world.

This is the opposite of how conventional firms respond—they reduce employment in response to adverse market conditions.

While drawing these important conclusions, Pérotin is also clear that more research needs to be done, especially comparing worker cooperatives to “specific segments of the firm population and other types of cooperatives… We need to know how cooperative specificities relate to success.”

This is a vitally important academic study that clears away common misconceptions, sums up what we know about the performance of worker cooperatives, and provides a roadmap for the further work that needs to be done.

The full analysis can be found in Chapter 8 of 'The Cooperative Business Movement, 1950 to the Present' and is available for download here.

George Speckman is a middle school teacher, an editor of Democracy at Work's Coop Talk, and an ordinary participant in Richmond, CA's local progressive movement. He has written on topics of Catholic theology, inspired particularly by Gustavo Gutierrez. His most recent work is The Suffering of the Impassible God: Innocent Suffering as God's Very Own.

Virginie Pérotin is a leading expert on the economics of employee ownership and worker cooperatives. She has been researching the topic for the better part of twenty years, and has an extensive list of publications in English and French examining the performance of worker cooperatives.

Prof. Pérotin has been a Professor of Economics at the Leeds University Business School since 2001. Before joining the University of Leeds, she was a Senior Research Economist at the International Labour Office in Geneva (Switzerland). She has also held research positions at the London School of Economics and the Centre d'Etude des Revenus et des Coûts (CERC), a research centre of the French Prime Minister's Office in Paris. Prof. Pérotin has also acted as a consultant to the World Bank, the OECD and the European Commission on issues of profit-sharing, employee ownership and employee involvement schemes. She is a member of the Council of the International Association for the Economics of Participation and of the editorial board of the Journal of Entrepreneurial and Organizational Diversity.