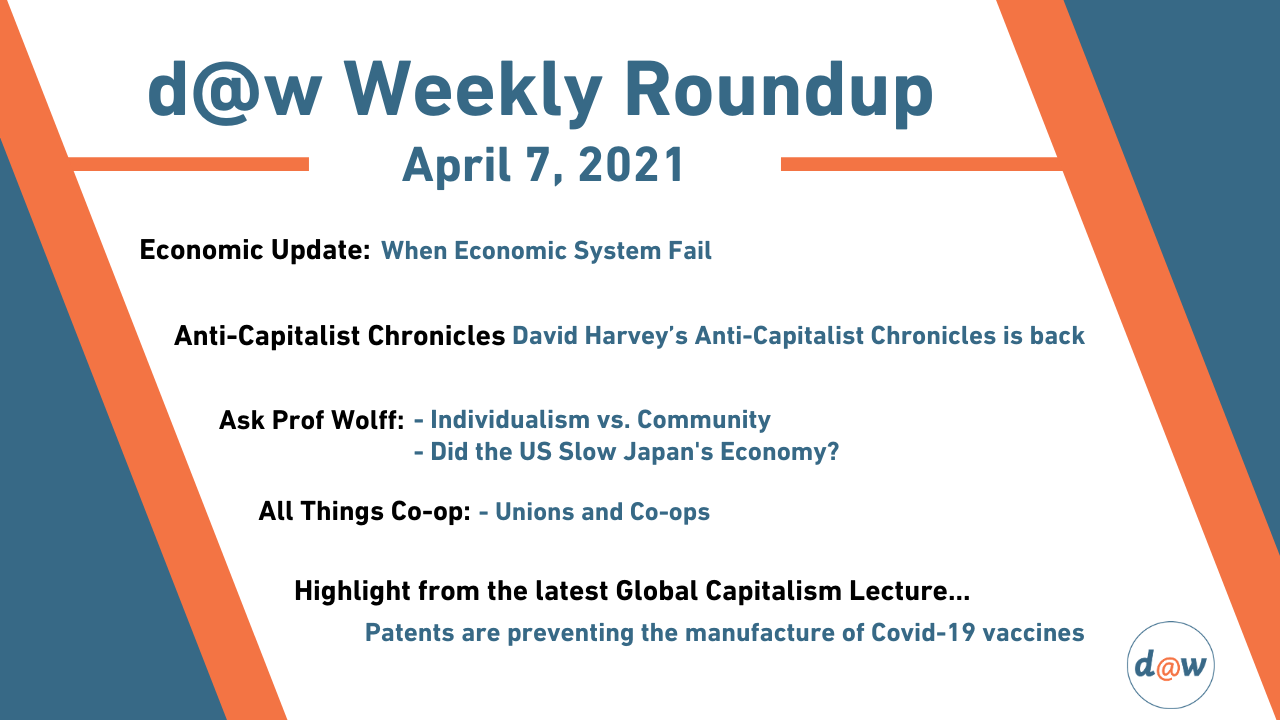 On this week's episode, Prof. Wolff talks about the structural failure of Biden's American Rescue Plan, Nigerian mass workers' movement, private electricity for the US rich, big vs small business struggles, and why opposition to lockdowns only prolongs Covid. On the second half of the program, Wolff interviews author Rob Urie on criticizing capitalism.

Wolff: "One of the ways that the companies making and distributing them handle shortages is by favoring some customers over others. And it will come as no surprise to you that they favor the companies that are the biggest, that are the largest source of profits for them. And that means you're destroying small business... The Robinson-Patman Act, a law passed in 1936 here in the United States that expressly forbids companies that sell to favor large over small businesses. And the antitrust division of the justice department is supposed to monitor, and control, and enforce that law, which it has not done and is not now doing... The thing that passed the law is the only thing that will get the law enforced: that would be a political alliance of workers and small businesses to help each other, and to see who their common enemy is, and that's the biggest businesses in this society." - Richard Wolff

David Harvey’s Anti-Capitalist Chronicles is back

We are very excited to welcome back David Harvey’s Anti-Capitalist Chronicles after an extended break.

“Prof. David Harvey is the very best of the best academics and modern intellectuals. So glad to see him back!” - M.B., [email protected] YouTube Subscriber

In this longer than usual episode, David Harvey starts off this next phase of Anti-Capitalist Chronicles by asking how we got to this point. The one year anniversary of the start of the Covid-19 pandemic has spurred a lot of reflection and analysis, but Harvey goes farther back than most to start to answer this question. Much farther.

Using the analysis of Karl Marx, Fernand Braudel, and Italian sociologist Giovanni Arrighi, David Harvey looks at the shifting hegemonies, centers and structures of capitalism since its inception in the 13th century. The centers of capital have shifted many times over the centuries, moving wealth and power from the Italian city-states of Venice and Florence to Amsterdam, then to London and finally the United States. Looking at the history, Harvey asks, what is the longue durée? What is the long-term trend that we can see emerging in 2021?

Part of this effort, Harvey says, is knowing how to look at where we're at, knowing what to name it, and recognizing the importance of naming it. He touches on this theme several times through the episode, even citing his own journey into identifying the term "neoliberalism" to appropriately describe what happened from the 1970s until 2010s. But Harvey says we're now in a new phase that still needs to be identified and named. What is the name for this? He isn’t sure yet.

What is critical in this process is to address material conditions rather than simply using theoretical ideas. He turns to a writing of Marx in Grundrisse to argue that one’s analysis has much greater potential for impact if they are rooted in people’s relationships with work, their family, and money: their material relations. Harvey says, "We fall for the fallacy of saying if we want to change the world we have to change people's ideas. Marx's point is you can't change people's ideas unless you exchange the experiences upon which those ideas are based. Those ideas are a material force for change in very significant ways."

Harvey ends the episode by addressing his fears of how capitalism will come in on the trail of disaster and will utilize the chaos and the mess to enrich the very rich. He says if that is the kind of world we live in, then we must name it in order to be able to combat it. “One of the purposes of analysis, like the kinds I'm trying to put forward here, is to try to create an understanding of the world in which we can start to think through opposition, and we can start to think about how to do things differently.”

We couldn’t agree more. Join us in this effort and in this journey. Subscribe to Democracy at Work’s YouTube channel to get notifications of new content including the next episode of David Harvey’s Anti-Capitalist Chronicles.

“This was excellent. Thank you.” - K.T., [email protected] YouTube Subscriber

“As usual, brilliant and edifying, so glad you are back.” - D.O., [email protected] YouTube Viewer

A patron of Economic Update asks: "Is it necessary to reshape the western culture that puts the individual interest first, and not the interest of the community? Until then, I think it will be very difficult for people to find co-ops an attractive idea, even when they admit that capitalism is broken and it's the source of the extreme inequality both in the US and in Portugal, where liberal economics have flourished."

Wolff: “The individual (whatever he or she is) is shaped by the community in which they exist, into which literally they are born. Initially the community is perhaps of the family, then of the larger extended family, then of the neighborhood, the tribe, the community, the society. Those institutions that comprise the society, small or large, shape who we are, literally what our individuality amounts to, but because each of us is positioned in a different place.”

Wolff: “Let's not get caught up in the either or. It's not our job to pick between two aspects of a continuously interactive totality. That's really one of the lessons that Hegel's philosophy and Marx's application of it to society teach and I think it is very helpful to understand.”

Ask Prof Wolff: Did the US Slow Japan's Economy?

A patron of Economic Update asks:"Prof Wolff has to examine the history of US economic prevention measures that were used against nations that grew to more than 2/3rds the US economy. When Japan reached this milestone in the 90s, there was swift action by the US to slow and even stop its growth."

Wolff: “The United States itself has a level of difficulty of economic problems, of contradictions, coming to a head that are sharper now, much more than they were in the 70s 80s and 90s when the Japanese were the great competitor. So all of the variables are quite different and I think therefore the outcome will be different as well”

This is a clip from the March 2021 Global Capitalism lecture by Richard D. Wolff in which he comments on the fact that factories are fully equipped yet doing nothing because they cannot access the patents to the Covid-19 vaccines.

Wolff: "Even if patents for other things were maintained (and there's a big debate about whether that's reasonable too) we clearly have a national planetary emergency here. And there's something profound in a global capitalist system that is protecting the profits of a small number of companies around the world, particularly American, at the price of death and illness all over the world." - Richard Wolff

All Things Co-op: Unions and Co-ops

Unions and Worker Cooperatives are two forms of worker organizations focused on fighting for justice in solidarity. However, Unions and Coops fulfill different functions. What similarities do they share? What can they learn from one another? And how can they work together to achieve the goal of worker emancipation? In this episode of All Thing Co-op, Larry, Cinar and Kevin discuss these questions.

KEVIN: “[Unions are a] perfectly sensible strategy. Easy to do right in the moment. You can form up with your workers and immediately say to the boss, give us better benefits or we go on strike. The deep revolutionary inside of me says you gotta take the next step that really makes the revolutionary switch.”

CINAR: “The lesson from the Google employees [is] being part of a bigger movement to improve working conditions, and democratizing the workplace so that you're not just talking about wages and benefits but you're talking about actually having a say in what you're doing and how you're doing it.