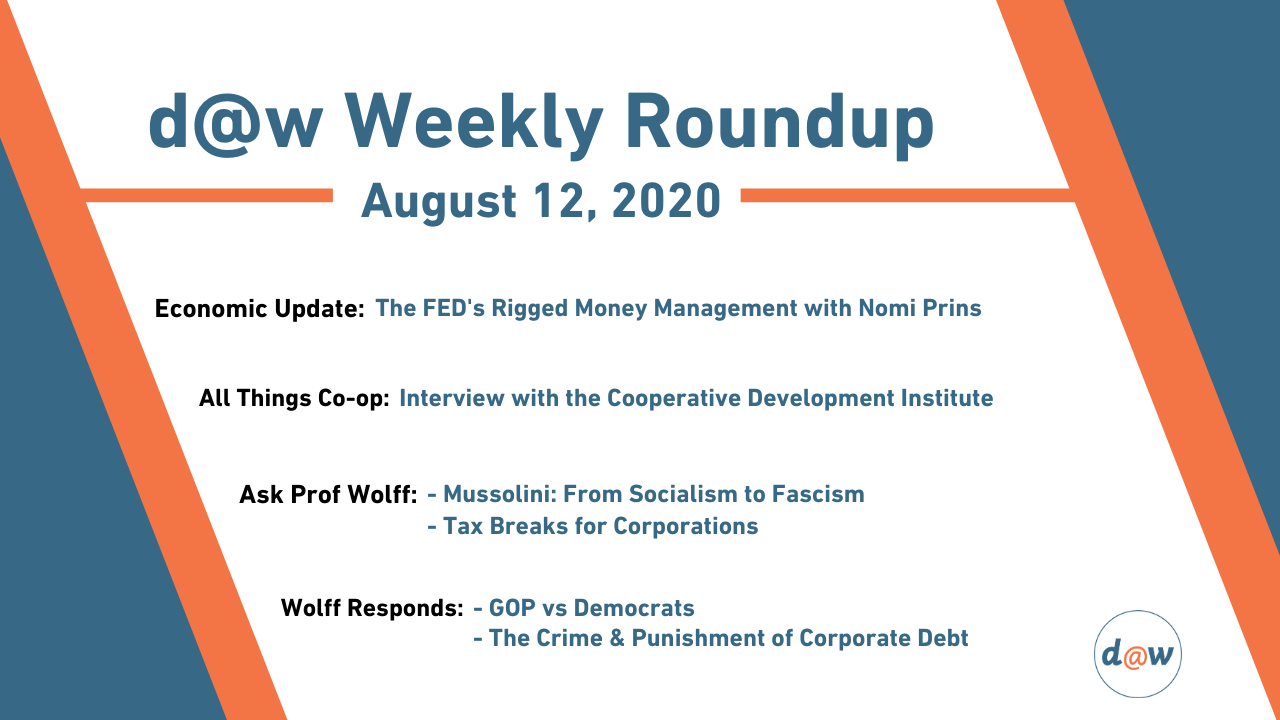 Two Ask Prof Wolff questions were answered this week. The first was about Moussolini and socialism and fascism. The second was about the benefits and risks behind corporate tax breaks.

Prof Wolff responded to two topics this week in his Wolff Responds, the sad choice between GOP and Democrats in the face of our current economic crisis, and the crime and punishment of corporate debt.

“Richard Wolff: Is this a bubble? Will it collapse?
Nomi Prins: It is a bubble and it will collapse.”

All Things Co-op: Interview with the Cooperative Development Institute

"Only about 20% of business listings ever sell and only about 15% of intergenerational family transfers of businesses succeed. So that's a powerful number and just knowing that right there it can be motivating to a business owner [to consider conversion to a cooperative]... We're not talking about millionaires who are business hobbyists. We're talking about people who've really spent a lot of time and effort and work building something and and it's their retirement. So if we can't secure that for them if we can't design a transaction that secures that that's the end of the conversation" - ATC guest Rob Brown, Director of Cooperative Development Institute’s Business Ownership Solutions program

AskProfWolff: Mussolini: From Socialism to Fascism

“You see spurts of interest in socialism and fascism when capitalism breaks down the 1930s was a perfect example. Today is a perfect example… The fascists are not against capitalism. They present themselves to capitalists as what it is the capitalists need to make their system work… What socialists want is not to have capitalism, to say we need to go to another system. Socialists don't come up and say to the capitalists ‘you need us. Let's work a deal.” That's what fascists do. Socialists say ‘we don't want you we don't need you you've got to go.’”

“Do the gains gotten by giving tax breaks to corporations justify giving them those tax breaks? I'm going to give you the honest answer: I don't know. Even more important, nobody knows...

Over the years corporations learned to take advantage of American cities and states, promising a glowing future. They hope that no one does what I've just done, pointing out that you cannot know that moving a company is always full of unknowns full of risks full of costs and benefits you can never know, let alone measure, in their entirety.”

“Why would republicans want to lower the payroll tax and democrats want to extend unemployment insurance. It's the same old. The Republicans are really awful, as I will explain. The democrats are a little less awful but that's about it… But that's what we got. Trump and Biden. Screw the worker hard and screw him gently. Those are the choices.”

“Corporate debt is a scam. It is the way capitalism works to move wealth in the direction of the few who need it least, by squeezing even more out of the many who can afford it least.”