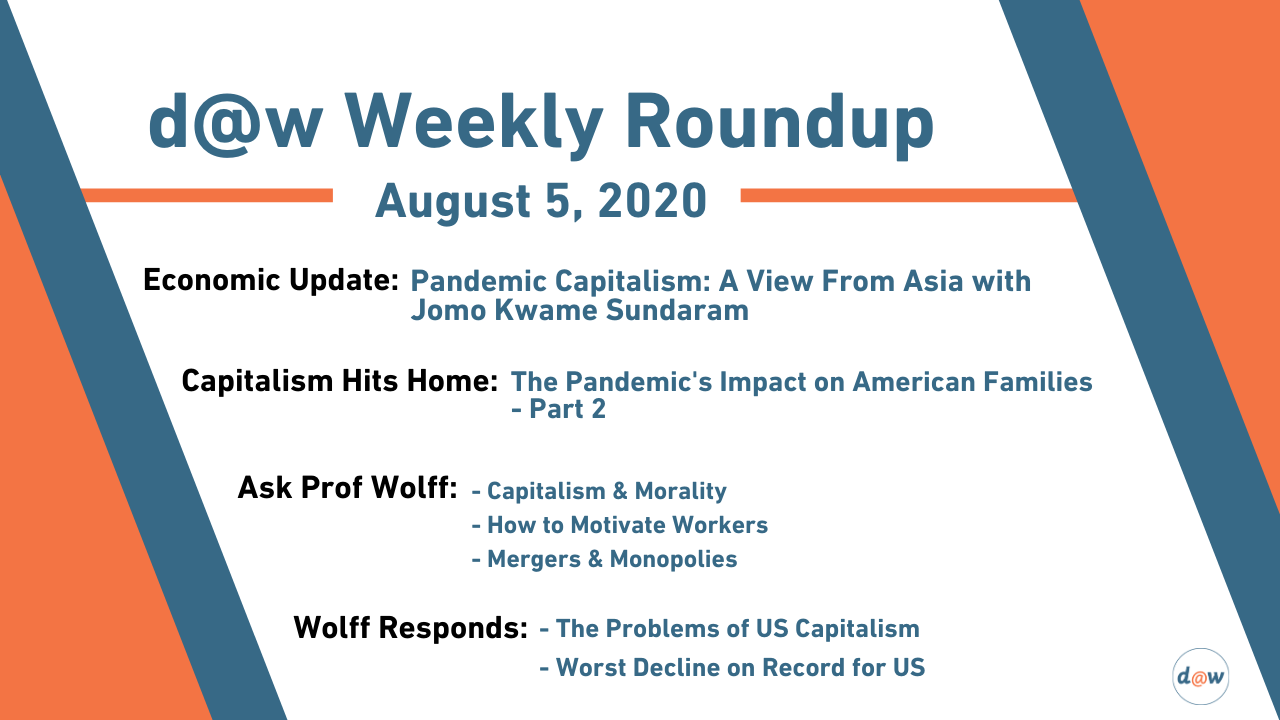 Former UN Assistant Secretary General and Malaysian economist, Jomo Kwame Sundaram joins Economic Update this week to talk about (among other things) the rising possibility of military conflict between the US and China, and the likelihood of it beginning in his region of Southeast Asia.

Dr Fraad continues her look at the impact of the COVID-19 pandemic on American families in the latest Capitalism Hits Home, focusing on children, and how the pandemic could have been handled differently.

Three Ask Prof Wolff questions were answered by Prof Wolff this week, addressing capitalism and morality, how to motivate workers, and the explanation of mergers.

Prof Wolff delivered two Wolff Responds videos this week, one of which talks about the June US budget deficit demonstrating the problems of capitalism, and the July 30th announcement by the United States government that we are in one of the worst crashes of our capitalist system.

"Because all bets are off now, the system is falling apart, the old game where you pay your premium and then at least you get something when you have a loss - no no no. Not anymore. Now it's a question of how much money you have. How many lawyers can you hire... It's a lesson in what the real golden rule means: Those who have the gold get to rule." - Richard Wolff

"It's in other children's eyes that children are recognized. That's really important for children. That interpersonal recognition from one another is taken away by COVID"

“I happen to believe that your job and the organization of your job has an enormous impact on your values, your beliefs, your politics, you as a human being. So I disagree with Milton Friedman. How you set up a corporation will in fact shape all the people in it at least as much as the other way around.”

AskProfWolff: How to Motivate Workers

“When you ask people whether they want to leave the job at five o'clock, it's not because they don't want to work and it's not because they don't have skills and enthusiasms and hopes and dreams to invest in the workplace it's because you have denied them the opportunity to do that. Worker co-ops are a form of liberating the capabilities of the mass of employees rather than squelching it.”

“To make a long story short what mergers are is consolidation as many firms compete and the winners absorb the losers… What's driving it is competition and profits… one of the most powerful incentives to merge is to economize on labor costs.. It's a chance to make more money for the people who own and operate these businesses.”

Wolff Responds: The Problems of US Capitalism

“In June of 2020 the government's deficit was 864 billion dollars for most of American history even recent history that would have been a very high number for a year we had it for a month. What does it mean? it means that our economic system is on life support.”

Wolff Responds: Worst Decline on Record for US

“We need to get out of a state of denial that our system has real problems, denial that like every other system that was born evolved over time and died, capitalism was born in the 18th century, evolved over time, and became a global system. The next step is for it to die. And the real question you have to face with me is whether that death is coming, and coming soon.”