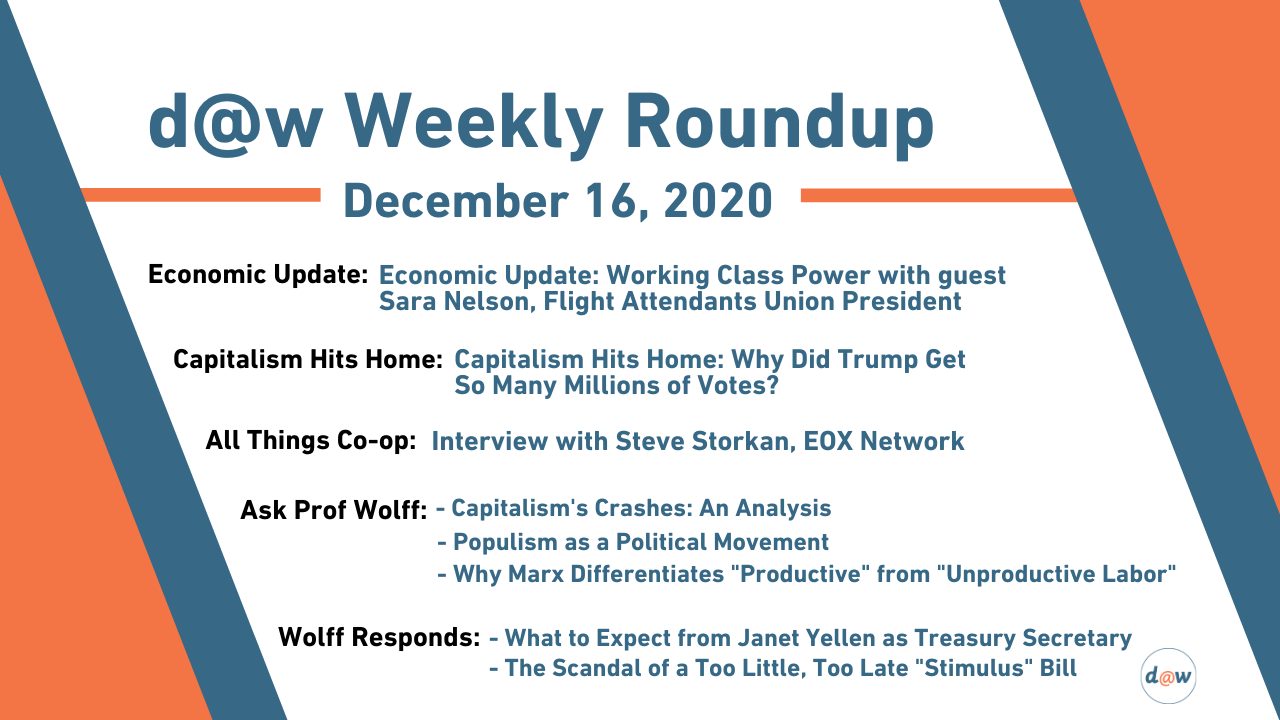 Wolff: "This paper looked at whether or not the biggest banks in America were adequately covered with capital, and could handle a crisis... The two biggest banks in the country couldn't survive for 30 days if we had a crisis of the dimensions we have now."
...
Nelson: "In aviation we're 80% unionized and we are at the table in everything, in every aspect of safety and health in aviation... It was aviation workers who ended the government shutdown... when a few flights just started to stop because we had explained that we were willing to stop the whole system. They didn't want us to get a taste of our power as workers. And that's why that deal came together faster than anything you've seen before. Because if that had gone on much longer and the public had had an opportunity to really take in and understand the power that working people have, in putting our hands in our pockets, the whole thing would have been over. And they know that."

Capitalism Hits Home: Why Did Trump Get So Many Millions of Votes?

In this episode of Capitalism Hits Home, Dr. Fraad explores the Trump phenomenon, when millions shared Trump's message that they were conned but did not know that he pulled the biggest con of all. 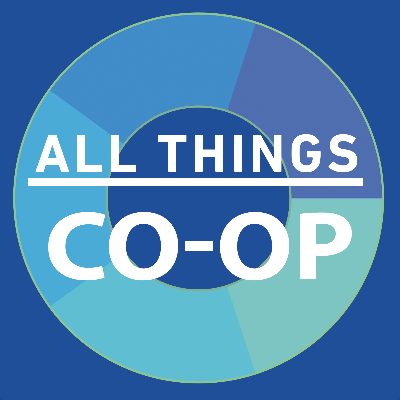 Kevin and Cinar talk to Steve Storkan, who self describes himself as "the ESOP 101 guy." He is the Executive Director for the Employee Ownership Expansion Network (EOX) and has been involved with employee stock ownership plans for over 25 years.

Steve: "I think we have to consolidate by collaborating as we look for funders across the country. We can't we can't go after these funders thinking, "Well, if I don't tell anybody else about this funding opportunity I have, and I win it, then I can keep it all myself." I think we have to have that idea of any funding is helpful and I think we can be more successful if two of us go at it together, or three of us go out that funder and say, look we're going to do this together, not just me."

A Patron of Economic Update asks: "Can you define and articulate the dimensions and factors used to determine that a "crash of capitalism" has occurred?"
Wolff: “The agency in this country, the United States, that keeps track of economic ups and downs is called the National Bureau of Economic Research usually referred to as the NBER… There are technical metrics that are used. For example, if you have a decrease in the quantity of goods and services produced (your GDP) for two consecutive quarters of a year, here in the United States that's the official definition of a “recession.” If the downturn only lasts one quarter, it's not a recession it's then a “downturn.” But these words are vague; they are differently used by different approaches, different thinkers. So I wouldn't get too lost in the words. Basically a “crash” is when you want to stress that this is one of those capitalist downturns that's worse than most in terms of the number of people hurt, the number of businesses hurt, how long it lasts, and what its social consequences are.”

AskProfWolff: Populism as a Political Movement

A Patron of Economic Update asks: "Why and how is it that populism became a dirty word, and became associated with fascism?"

Wolff: “When you have that, a rush of people renewing their involvement or being involved for the first time into politics, it's often referred to as “populism” because the people are getting back into the political process rather than leaving it to the professional politicians… Most of the time populism of whatever sort involves people who are arriving with a more or less left-wing perspective. But there are also people who come from the right with a politically right wing… As your question shows, you're aware that the centrists, the old establishments, they don't like populism. They don't even want the mass of people all that involved… Those establishments do not sit by quietly and watch. This is a threat to their power to their entrenched positions. So they basically view it as a disaster either way. They don't like the left version and they don't like the right version… Whatever can be brought up, the center can be counted on politically to attack populism of left or right…. Populism isn't intrinsically left or right. It's both. It's a scene, a site, where the struggle between left and right goes on. And one or the other may win that struggle and then populism becomes more one or the other but that's always the outcome of a struggle. There's no intrinsic thing about populism that makes it right or left.”

A Patron of Economic Update asks: "You mention three types of "actors" within the modern U.S. economy: productive, unproductive, and capitalist. Are unproductive workers those in fields such as information technology, business analysis, the law, doctors and other "white collar" or "grey collar", non-service fields?  I assume productive workers are defined as those who engage in manual, or service, labor or work in manufacturing."

Wolff: “Because Marx is interested in relationships he says that in the workplace in the relationships there is another kind of worker who doesn't produce more than he or she gets, who isn't productive in the very precise sense of producing a surplus, producing that extra out of which capitalists wealth profits and growth emerge. Who are they? They are the people who have to provide the conditions, the environment, within which productive workers can produce the surplus for their employer… The secretary provides a condition for the work to be done. So too the security guard. You need that work done but it's not work that produces the value of the commodity that the capitalist gets from the productive worker… It's a way of understanding that we need to see the actor who makes the surplus and the person who enables it. And that distinction is central to Marx's argument about how capitalism works and how the relationships in production shape the larger society, which is ultimately Marx's goal.”

Wolff Responds: What to Expect from Janet Yellen as Treasury Secretary

In this Wolff Responds, Prof. Wolff weighs in on Janet Yellen's role in the new Biden Administration.

Wolff: “I believe it was June of 2017, she told the gathering of bankers and academics in the prestigious hotel in London that she didn't think that there would be any more financial crashes in capitalism in her lifetime… Wow it's as if she hadn't noticed that we had a crash in this country in the year 2000, and then seven years later in the year 2008. As if she couldn't imagine that maybe in the year 2020 there might be another one like the one we're living through… She's a left liberal academic economist sort of in the mold of Kennedy, Johnson, people like that. Expecting a big breakthrough in her leadership? Don't. Expecting a radical departure from what has been the establishment norm? Don't. You'll just be disappointed... The notion that she is very different is about as reasonable as imagining that Joseph Biden will be very different from the other establishment democrats.”

Wolff Responds: The Scandal of a Too Little, Too Late "Stimulus" Bill

In this Wolff Responds, Prof. Wolff argues that the capitalist system is no longer working. It has failed to protect people from crashes, from a virus and from corporate greed. There is an unspeakable immoral gap between the needs of the people and what politicians in Washington are doing with the complicity of the corporate sector and the rich who dominate and control the government.

Wolff: “Here's the bottom line: it's too little and it's too late. It cannot undo the unspeakable damage done… Nor is my criticism of the government some sort of cheap shot blaming the government as if it alone were the problem. I know that the crucial question to ask when looking at government policy is the great question, why? This is a government of, by and for the very rich people who run it, who own it, who serve at the top of it most of the time, or their servants do… The 1% biggest richest corporations took a full quarter of all of that relief money it was intended for small and medium businesses. Even then it was grabbed and ripped off by those at the top… This is a system breaking down, unable to function and unable even to relieve the victims of its failure to function.”

We are taking some time off over the holiday season, so we will have less content for you at the end of the year. Here are the shows you can look forward to before we start 2021.