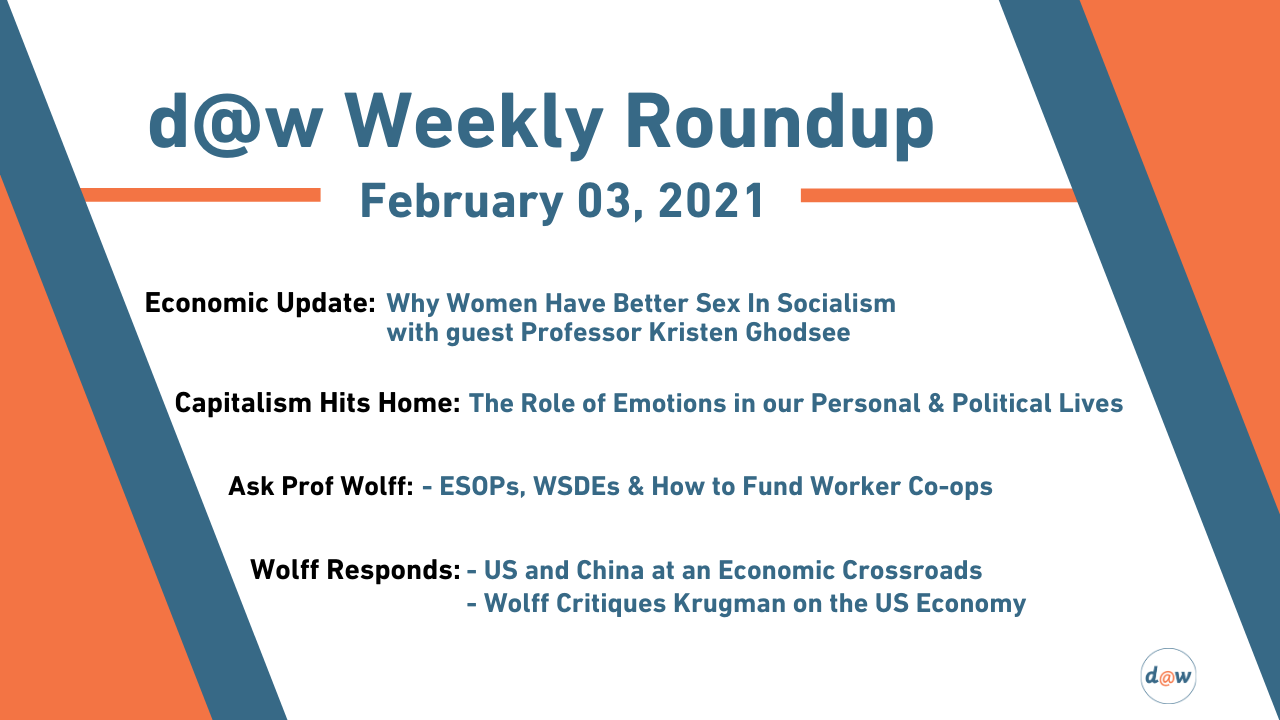 Economic Update: Why Women Have Better Sex In Socialism

On this week's show, Prof. Wolff presents short updates on the Economic Plans of the Biden administration and US economic inequality, and why raising minimum wage to $15/hour is insufficient to deal with US economic inequality and its social consequences. The second half of the program features an interview with Kristen Ghodsee on women and the socialism vs capitalism debate.

Prof Wolff: "If you have a $100,000 house in a community in America, you pay a property tax to that town. If you sell that house and use the $100,000 to buy $100,000 worth of stock in some company, you know what your property tax is? Zero. There is no property tax on stocks and bonds. And who owns the bulk of stocks and bonds in our society? Here's the answer: the 10% at the top own 80% of the stocks. This is an enormous tax exemption for people who qualify for it, because they're rich enough to buy stocks and bonds, which most Americans aren't. The inequality and the injustice of this tax system is stupefying."
...

Professor Kristen Ghodsee: "And so the claim of [my] book is actually quite simple. It's that, in fact, socialism was in fact better for women's lives on a variety of different rubrics than capitalism in the West...  There is data that is available to us that shows us that not only were women's lives in some respects much better behind the "Iron Curtain" during the Cold War, but that after 1989 and 1991 their lives rapidly deteriorated with the introduction of free markets."

Capitalism Hits Home: The Role of Emotions in our Personal and Political Lives

On this week's episode of Capitalism Hits Home, Dr. Fraad and Prof. Forlano discuss emotional needs and desires and how they permeate every aspect of our lives. They also suffuse every political movement whether socialist, fascist, or neoliberal. We bring ourselves to everything we do. We are emotional beings. We study emotion's role which rarely appears in the credits.

Forlano: “When you walk into the area where people are striking, you can feel the beautiful solidarity between human beings and that is why I think these violent forces on the right, of corporatism, wherever they come from, seek to really crush that emergence of the human spirit…”

Fraad: “That's right and one of the reason that all the corporations that are big at least publicly condemned the actions of Jan 6 at the Capitol is they don't want people out of control...They want people at home, watching tv, and watching tv ads, and consuming expensive junk food and obeying the status quo and not speaking out about what bothers them.”

A patron of Economic Update asks: "It would be interesting to contrast and look at ESOPs and WSDEs side by side! I have spent time on the lack of financing options from traditional financial institutions for worker cooperative businesses and speculating on how that could also contribute to the entrenchment of the private business model, effectively crowding out financing but for the private business model. I wonder if credit unions (as existing financial cooperatives) are in a unique position to provide that support or whether a public bank would serve that purpose more effectively." This is Professor Richard Wolff's video response.

Wolff Responds: US and China at an Economic Crossroads

In this Wolff Responds, Prof. Wolff urges the Biden administration to learn from the mistakes made by the Trump regime in the attempt to halt the People's Republic of China's progress, and instead move toward establishing a cooperative relationship. China's continue economic ascend is unwavering despite the pandemic. Wolff worries that economic trade wars can easily slide into military confrontations, and vehemently cautions against any kind of feud between 2 nuclear powers like the US and China.

Wolff: “The people's republic of china is now the major global economic competitor for the United States. To be as blunt as the time requires, the United States is a descending economic power in the world… There is no escaping this other than by the mechanism we call denial… [The Chinese] have achieved what the vast majority of poor countries in the world dream about: going from poverty and backwardness to a modern powerhouse high-tech economic system they are not going to stop what has worked so well. The Trump administration failed to stop it. What will Biden do? He ought to go back to find a cooperative solution... Economic trade wars, tariff wars, competition attacks on corporations have a nasty way of sliding into military confrontations. And between two nuclear powers that is a more awful prospect than I want to discuss or that the Biden administration ought to risk entering into.”

Wolff Responds: Wolff Critiques Krugman on the US Economy

In this Wolff Responds, Prof. Wolff critiques Krugman's analysis of the impact of COVID on the US economy. Unlike Paul Krugman, Wolff argues that the capitalist economic system itself is the root cause of the desperate economic times we are living through, and not some external force like the COVID virus.

Wolff: “Nor do I think the economic crash we're living through is a natural disaster. In fact I think the attempt to make it a natural phenomena, to naturalize it, is a none too subtle effort to get away from the social problem (and the social problem is something that appears very rarely in these kinds of discussions by these kinds of folks), namely capitalism... We weren't prepared [for the coronavirus]. That's not nature, that's the problem, is it Professor Krugman? It's the capitalist system's profit-driven decisions that made all that happen, and the complicity of a government that allowed the private sectors incapacity to secure public health nonetheless to be in charge… And now we're going to blame something natural: the Covid virus. These are lame, superficial efforts to get the blame away from the economic system that is a root cause of the suffering we are going through. Am I surprised that the New York Times is interested in deflecting criticism from capitalism? No. Am I surprised that Ezra Klein or Paul Krugman are happy to participate in that process? No. But it is important to point it out so that everyone can think about what an alternative analysis for this crisis might look like.”