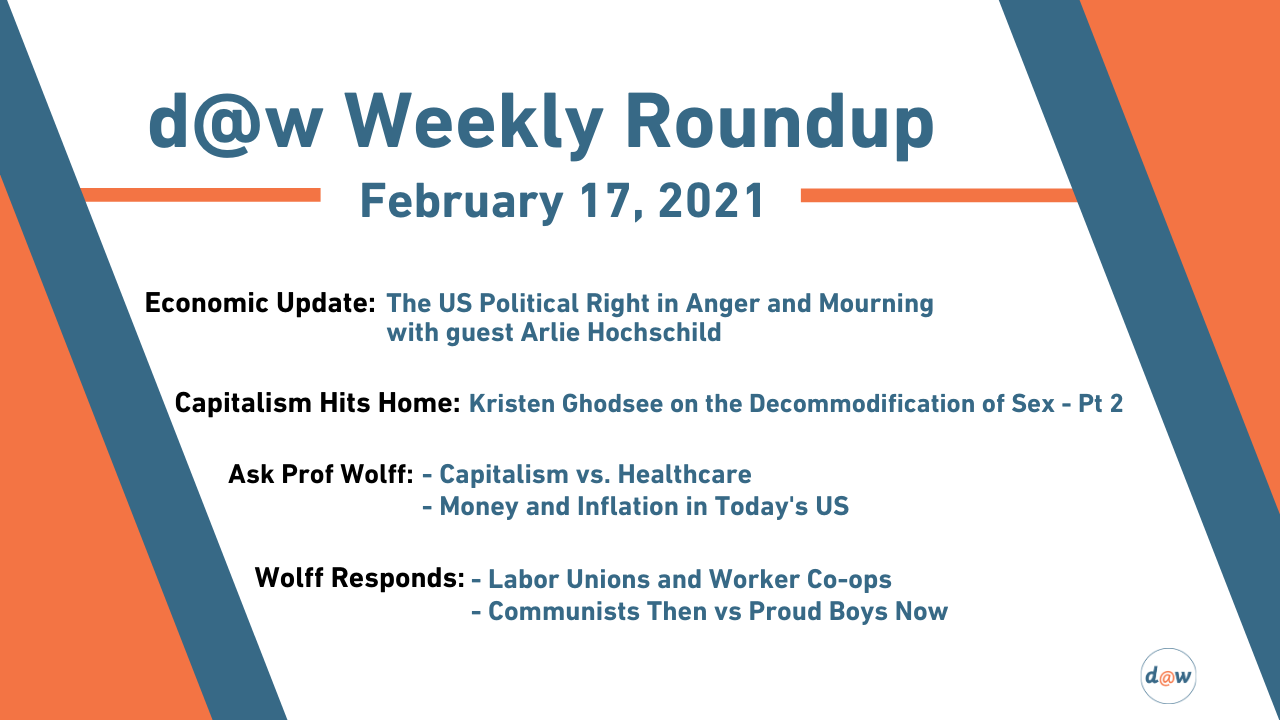 Economic Update: The US Political Right in Anger and Mourning

On this week's show, Prof. Wolff presents updates on the radical policies of Berlin's city gov't and its Die LInke Party; why raising minimum wage to $15/hour is too little, too late; how bans on evictions and utility shut offs fight Covid-19; and lastly, he argues for the urgent need for a changed China policy. On the second half of the show, Wolff interviews Prof. Arlie Hochschild on her 10 year study of the US political right.

Wolff: "The government in the city of Berlin is a coalition of three parties: the German Socialist Party, the German Left Party (which is to the left of the Socialist Party), and German Green Party. Why is this important? Because they've come up with a number of policies, three in particular, that I want to mention to all of you so they can imagine what that might mean in terms of what Mr. Biden's team is and is not doing..."
...

Guest Arlie Hochschild: "I've been talking to people on the right since 2011...  I talked to a man who said, 'I voted for Donald trump. He said he would bring coal jobs back. I knew he was lying but I felt he saw me.'... [Post January 6th] they feel (the people I'm talking to now) in a box. On the one hand they feel criminalized by the justice department and reviled by the left, and they feel abandoned by the right."

On this part 2 of 2, Dr. Fraad and Prof. Forlano continue their conversation with author and Professor Kristen Ghodsee about the interdependence of women's sexual relationships, fertility and motherhood to their economic independence.

Guest Kristen Ghodsee: "A 2013 Pew survey said that 28% of Americans think that financial stability is a very important  reason to get married. We live in a society where our relationships are profoundly commodified. And if we want to build a movement that's inclusive across class, race, gender, sexuality, disability, religion, ethnicity, all of the various aspects of our identity that are important to us, we have to  understand the profound ways in which capitalism, as a system, divides and conquers through these narratives of commodification... And we need to be attentive to the conditions under which we experience [our] relationships. And that's why I think it's so important to look at the example of alternatives to capitalism."

A patron of Economic Update asks: "What can you tell me about Catherine Austin Fitts? How do you feel about her credibility regarding COVID and US financial situation? Thank you!"
This is Professor Richard Wolff's video response.

Wolff: “I'm not familiar in detail with her particular work but i wanted to answer because there's an important issue here. One of the many negative consequences of allowing your health system to be owned and operated overwhelmingly by profit-driven capitalist enterprises is that people have very legitimate reasons to be suspicious, to be skeptical, and to wonder about the motivations and the safety of using medications following specific treatments and so on… Drug companies, medical device companies, medical insurance companies and a great many hospitals and medical practices are driven by people whose bottom line (they will tell you) are profits. They are in it to make money and that's how the capitalist system works… We would be much better off if we did not have to worry that the information we were receiving had the ulterior motive of profit making. Medical care is too important to be left to capitalism.”

AskProfWolff: Money and Inflation in Today's US

A patron of Economic Update asks: "Prof. Wolff, what is the current inflation rate in US? I see on the gov't sites as being 1.4% but after we printed all that new money last year plus prices of goods/services increase, wouldn't it be around 10-20%?"
This is Professor Richard Wolff's video response.

Wolff: “What is the relationship between the money pumped out by the government (mainly through the federal reserve) and the level of prices? Some people write and think as though there's a direct one-to-one relationship. This is wrong on several levels… What we've had in recent years is yes, a big increase in the money supply but at the same time a major drop in the velocity of money. Why? Because most of that money is going into the hands of very rich people, banks, insurance companies, hedge funds, and they let the money sit… The extra money went into the stock market and there it did have the inflationary effect that N.J. was wondering about: stocks inflated, in good part because of all that extra money… So there's your answer for why the extra money did not have the inflation of goods and services you might otherwise have expected.”

In this Wolff Responds, Prof. Wolff argues that labor unions and worker co-ops should not be thought of as competing with one another, and instead focus on building a coalition of mutual support. Wolff explains the importance for workers of fighting for each.

Wolff: “I would like to dispute right from the beginning the notion that there is an either or going on here, that one somehow has to choose which of these two struggles… These are two different struggles that can and should be in a coalition of mutual support. In this way it's a little bit like the ancient debate on the left for at least the last 200 years between what used to be called “reform” and “revolution” Changes in the here and now that improve things versus fundamental transformations that improve things. It's not that you fight for one or the other, it's precisely that you fight for both of them…Unions fight so that we get a better deal within the capitalist system. Working people need unions, critics of capitalism could and should support what unions do… Fighting for [worker co-ops] is not an either or with fighting to improve workers living and working conditions through union bargaining with an employer.”

In this Wolff Responds, Prof. Wolff compares and contrasts the reaction and response by the US government to Communists after WW2 to the Proud Boys after the attacks on the US Capitol on January 6, 2021. He asks if the  the persecution and brutal treatment of the Communists for 70 years will also be imparted on the extreme right wing groups like the Proud Boys and others.

Wolff: “70 years of relentless anti-communist activity persecution, imprisonment, you name it… And what was said as the bad thing the communists had done was that if you were a member of the communist party the government considered that you quote advocated the overthrow of the United States government by force and violence. That was the reason you were subject to the arrests and the deportations and the imprisonment and the loss of your job etc… No communist party officially or unofficially ever did anything like attack the United States Capitol in Washington D.C like what the Proud Boys, Oath Keepers and a whole bunch of others just did… Will they then history asks be subjected to anything like the governmental onslaught deportation arrest imprisonment job loss for 70 years?”