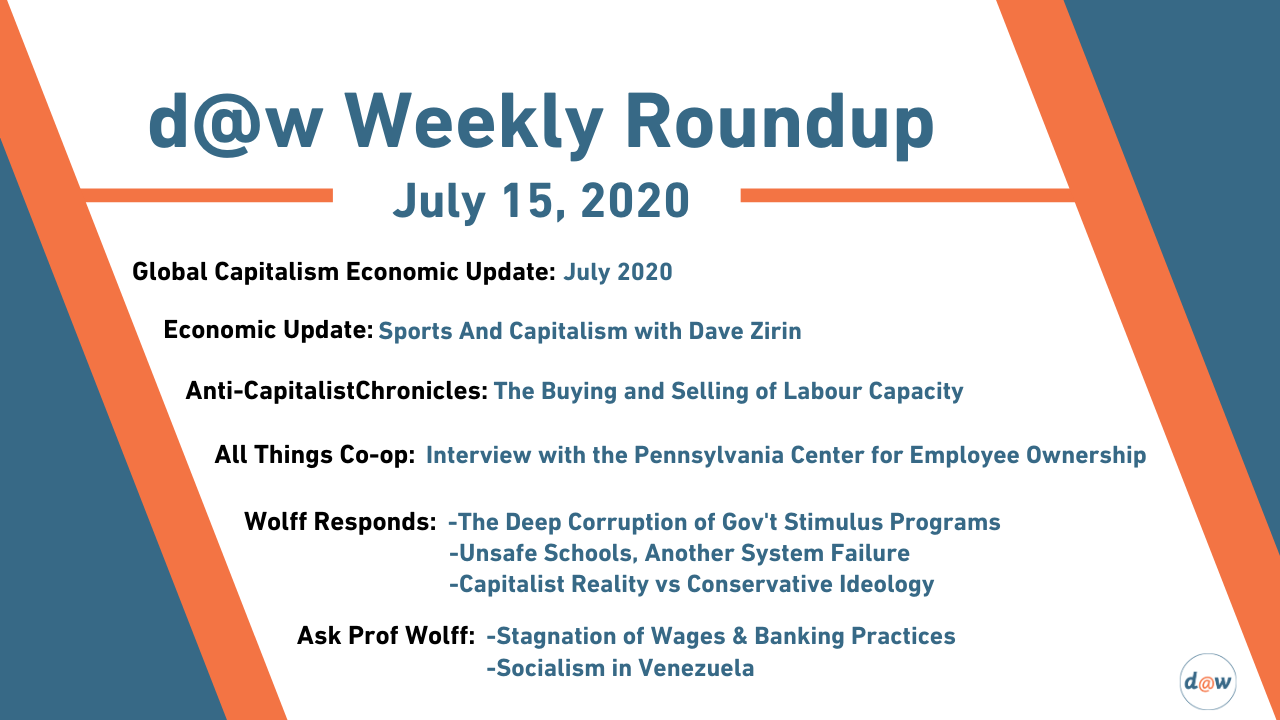 Last week was a big week! Check out the latest content from Democracy at Work.

The latest Economic Update featured guest sports writer Dave Zirin, who talked about the effects of capitalism on sports.

David Harvey looks at the ways in which the various processes at work within a capitalist mode of production intersect and interact with one another in the latest Anti-Capitalist Chronicles.

All Things Co-op joins our YouTube channel with their very first video episode! Season 3 will focus on cooperative initiatives around the globe and at home and was kicked off with an interview with Kevin McPhillips of the Pennsylvania Center for Employee Ownership.

Prof Wolff answered 2 Ask Prof Wolff questions, the first about Venezuela being used as “the” example of socialism, and the other about how stagnant wages allowed banks to profit off of the debt of Americans chasing the “American Dream.”

Prof Wolff delivered 3 Wolff Responds this week about the deep corruption of government stimulus programs, conflicting capitalist reality and conservative ideology, and the pressures to return to school in the fall.

"I've lived a good long time and I have never seen the American economy in worse shape than it is at this moment. Problems have been kicked down the road. 5 of them are now converging at the same time and we are in a genuine systemic crisis."
"All pretense that American capitalism was a rising tide that lifts all boats has been smashed."
“We are at a crossroads in the United States more so than I ever anticipated seeing in my lifetime. The stakes are enormous, the danger stupefying. But the possibilities for radical change, insight and transformation are what keep us all going. And I want to be one who celebrates them."

Economic Update: Sports And Capitalism
"Under capitalism we've seen sports become a big business. The game is not just to be played, the game is to be sold to as wide an audience as possible." - Political sports writer Dave Zirin

Anti-Capitalist Chronicles: The Buying and Selling of Labour Capacity
“When we're looking at this circulation process of labor, we're looking at it and recognizing that each moment has its own distinctive character.But each moment is, to some degree or another, internalizing impulses, effects, and so on, from all of the other moments. That is, what somebody does in the world of production is not independent of the kinds of choices they might have in consumer markets… There's a cross-flow of influences between these different moments of production, at different moments within the circulation process.”

All Things Co-op: Interview with the Pennsylvania Center for Employee Ownership
Kevin McPhillips of PACEO: “I would love to see some day where the term "employee ownership" is in the common language the same as "401k" is. Now, you may not know the details of what a 401k is, but we know that it's a benefit program. And more so, if someone goes and looks for a job, they're likely to ask the question, "Do you have a 401k plan? Are you employee-owned?" before I make a decision about working somewhere.”

AskProfWolff: Stagnation of Wages & Banking Practices
“The banks went into what is euphemistically called “consumer services.” It's called ripping off the public, taking advantage of the working-classes desire to hold on to the American Dream the only way that was left to them when their wages didn't go up. That was by borrowing. And over the last 40 to 50 years banks have made a fortune off of this, let's be honest, enforced lending debt of the working class.”
“Yes, the banks did become more risk takers but they did so on the backs of the mass of the working class who had to go into debt to even fantasize the ability to give themselves and their children the American Dream they had been promised.”

Wolff Responds The Deep Corruption of Gov't Stimulus Programs
“The program is called the Paycheck Protection Program but no one knows exactly what that means and no one knows exactly what the corporation is going to do with the money it gets from the government because that's the private business of that tiny minority… It's already clear that all kinds of companies that got some of this money are already planning job cuts come August, September, October, and so on.”

Wolff Responds: Unsafe Schools, Another System Failure
“It's almost an afterthought that halfway into July we're beginning to recognize that there's a school issue, and solving it having failed to make the school safe by pressuring people to go back in is outrageous and criminal.”

Wolff Responds: Capitalist Reality vs Conservative Ideology
“The Ayn Rand institute (an institute developed around the personality and work of one of the loudest conservative writers ever to have set foot here in the united states declaiming against the government as a burden) got somewhere between one and two million dollars out of this governmental program... There is a certain humor attached to their being exposed this way. It's sort of like capitalism refuting the conservatives who are trying so desperately to support it and have gone so over the top that the system itself smacks them in the face to say ‘Hey, take it easy.’... [I want] to go through a few of the ways in which the government has always been central to crucially supporting capitalism.”