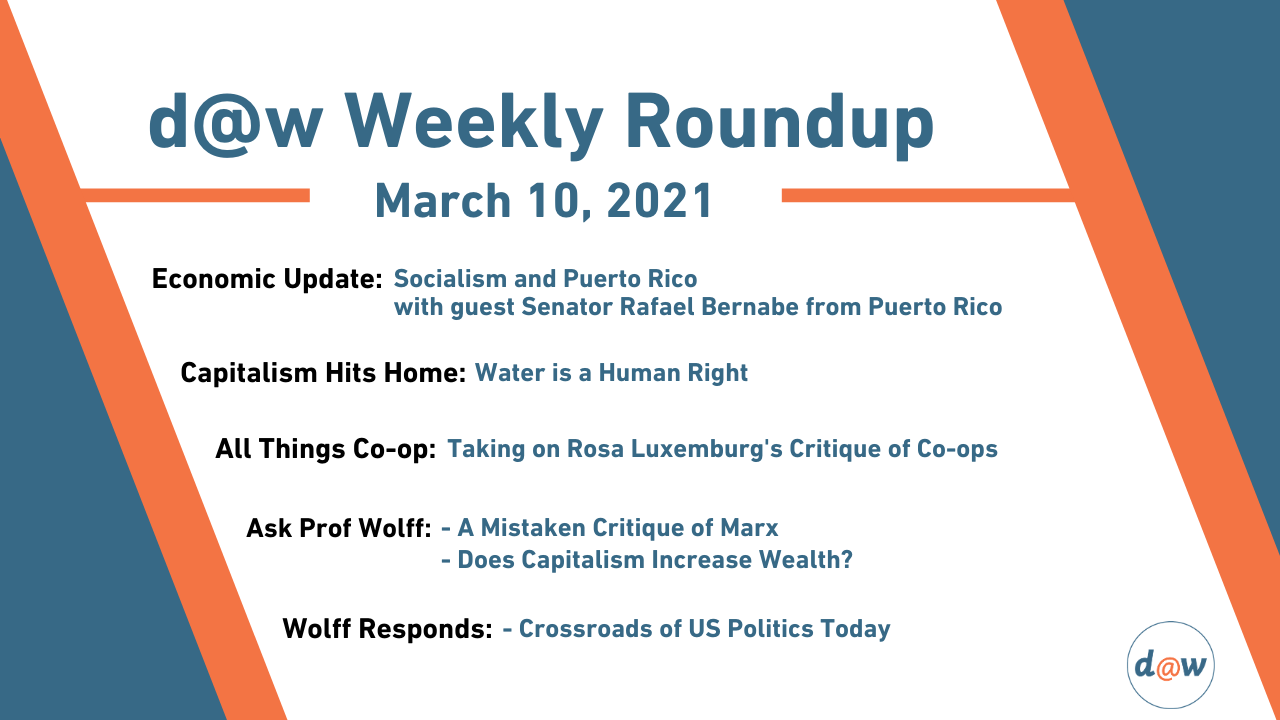 On this week's EU, Prof. Wolff presents updates on worsening US inequality, universities borrowing more, billions earned by hedge funds in 2020, Bezos "charity" giving, Macron and French conservatives' anti-Americanism, and Communists after 1945 vs Proud Boys now. On the second half of the show, Wolff interviews socialist Senator Rafael Bernabe from Puerto Rico.

Wolff: “Chase Coleman of the Tiger Funds hedge fund, took home $3 billion in the year 2020... $58 million per week. You see, Chase Coleman does not have to buy lottery tickets because he wins the lottery every day, seven days a week, 52 weeks of the year…”
…
Bernabe: “I personally think that either we put an end to capitalism or capitalism will put an end to us. So for me the rise, the growth, the development of progressive anti-capitalist forces is very important anywhere in the world, but it is particularly important in the United States, the United States being the center of capitalist power in the world."

In this second episode of the 4-part series on capitalist commodification, Fraad and Forlano discuss water rights. 8.8 million people in Texas are still having issues with their water supply. Capitalists have taken control of and privatized a basic human right and need, the access to a safe and clean water supply.

Forlano: “Harriet, you brought up Wall Street and not only is water infrastructure moving toward private ownership but trends on Wall Street also exist to commodify water resources. Food and Water Watch, according to them investment funds have over $100 billion dollars ready to invest in the private ownership of water rights... Obviously the concern about that is that it will become subject to market prices and then in conjunction with private companies at the helm of the water infrastructure only those people who can afford it will have access to water. Ah!”
Fraad: “They have the interest in making more money and whether you die or not is irrelevant to their calculus. And that's what we can allow with things that are basic needs like heat, and cooling, and water, and healthy food, and other things we'll talk about. You know, this is an atrocity.“

All Things Co-op: Taking on Rosa Luxemburg's Critique of Co-ops

In her famous text Reform or Revolution, Rosa Luxemburg spent a short chapter discussing cooperatives, and made a classic critique. In this episode Larry, Kevin, and Cinar take on the critique and try to answer it.

Larry: "’Reform or Revolution’ goes through a lot of critiques of reformism and [Rosa Luxemburg] did spend a little bit of time talking about cooperatives... that cooperatives, especially in production, are at best a hybrid form of capitalism... stuck in the relations of capitalist exchange.”
Cinar: “But that's because there's a system, there's an enabling system around it... So she's right about that. But it's not that they can't at the end of the day compete and be more effective, it's that you just have to create the context in which they're operating in and make that much more supportive of what they're doing. And then let's see how capitalist enterprises compete against co-ops.”
Kevin: “To echo Cinar, I think in some ways, I do think that this criticism is legitimate if you kind of understand the cooperative movement as divorced from the larger social movement towards radical anti-capitalist change. So yeah, if your position is ‘Look, all we got to do is like create CDFIs and cooperative banks and the US Federation of Worker Co-ops and just like slowly over the course of like 500 years grow this own independent economy,’ then like yeah, I think you're doomed to failure.”

AskProfWolff: A Mistaken Critique of Marx

A patron of Economic Update asks: "Famed economist Vilfredo Pareto, who was a lifelong adversary of Marxism, believed that Marx’s view of the history of class struggle was highly oversimplified and misleading – that the struggle goes far beyond the proletariat/capitalist dichotomy. He wrote: "The class struggle, to which Marx has specially drawn attention, is a real factor, the tokens of which are to be found on every page of history. But the struggle is not confined only to two classes: the proletariat and the capitalist; it occurs between an infinite number of groups with different interests, and above all between the elites contending for power. The existence of these groups may vary in duration, they may be based on permanent or more or less temporary characteristics. In the most savage peoples, and perhaps in all, sex determines two of these groups. The oppression of which the proletariat complains, or had cause to complain of, is as nothing in comparison with that which the women of the Australian aborigines suffer. Characteristics to a greater or lesser degree real-nationality, religion, race, language, etc. - may give rise to these groups. In our own day the struggle of the Czechs and the Germans in Bohemia is more intense than that of the proletariat and the capitalists in England." Would you care to respond to this?
This is Professor Richard Wolff's video response.

Wolff: “Marx goes to elaborate lengths to talk about all of those others as classes: Money lenders, bankers, landlords, sales personnel, purchasing personnel, clerks, guards, all kinds of people who are not capitalists (they don't hire anybody) and they're not workers who produce goods and services. It's not what they're there for. They're there to create the conditions. That is all worked out in great detail in Volume III. Marx is clearly working, as you can see when you read it, with a theory that divides people not into two classes (capitalist and worker) but into many classes that are related to capitalists and workers, but are different from them. In short, it's a complex, rich class analysis.... Marx never said, never argued, nowhere, that the only struggle that goes on in the world, or the most important struggle, is the struggle between capitalists and workers. He focused on it—absolutely, he concentrated his attention on it, certainly—but it was because it had not been understood. He thought he was contributing a new additional insight, not some claim that what he was focusing on was any more important than what others had already figured out.”

A patron of Economic Update asks: "Is there any evidence to support the idea that capitalism is responsible for the increase in wealth seen in the western countries during the 20th century? Or can it all be explained by technological advancement, and exploitation of the global south? Are there any other factors that contributed significantly to this increase? To what extent can capitalism be credited with aiding technological advancement, considering that basically all new developments seem to be the result of government spending, either wartime spending or government funded university projects?"
This is Professor Richard Wolff's video response.

Wolff: “Capitalism is a system that develops wealth. it's not surprising that it does since it's a system focused on doing exactly that… But that is in no way unique to capitalism. Wealth in Europe grew dramatically during the feudal period, wealth in Europe grew dramatically earlier during the slave period, and I could go on, both in Europe and in other parts of the world… There are a whole host of other contributors to wealth. It's never only the capitalist system or the feudal system or the slave system or the socialist system. It's also such things as raw materials, weather, air conditions, all kinds of circumstances in nature, all kinds of circumstances in history that will determine whether and how fast wealth is created… So the bottom line is yes, like all systems capitalism has contributed to wealth. That doesn't mean we can't contribute to wealth more effectively. We might even prefer a different system that grew wealth less quickly because we were concerned about, for example, the environment.”

In this Wolff Responds, Prof. Wolff talks about the changing political landscape in the US. With the US capitalist economy in rapid decline, desperate Americans faced with unemployment, stagnant wages, and massive debts become vulnerable to scapegoats provided by shrewd politicians who seek to protect their own interests. Unless the Democratic party becomes once again the party of working Americans, the political realignment of the US seems to favor Trump and right-wing conservatives, as this year's CPAC has shown.

Wolff: “We are now experiencing the problems of a capitalist economy on the way down and chief among them is the usage by those at the top (of their positions as corporate CEOs, as owners of huge blocks of stocks) to make sure that as the economy has trouble the burden, the cost the pain, of being on the downturn is shifted from the top to everybody else. And Americans are hurting… They weren't told to expect this. They worked hard, they studied hard, they thought they were going to be okay. And so they want to know what happened, what went wrong. And the minute people are in that situation, and the minute the economic vice is closing in on them, they become vulnerable to any political hustler with a scapegoat… They voted for Trump and they will vote for conservatives unless and until the Democratic Party resumes being the party of working people. And that requires that you undo the last 40 years of redistributed wealth just like the last 40 years undid the redistribution achieved in the New Deal. anything short of that and CPAC and Trump (either the same individuals or a new crop) will be in our near future. That's what the political realignment of America amounts to.”