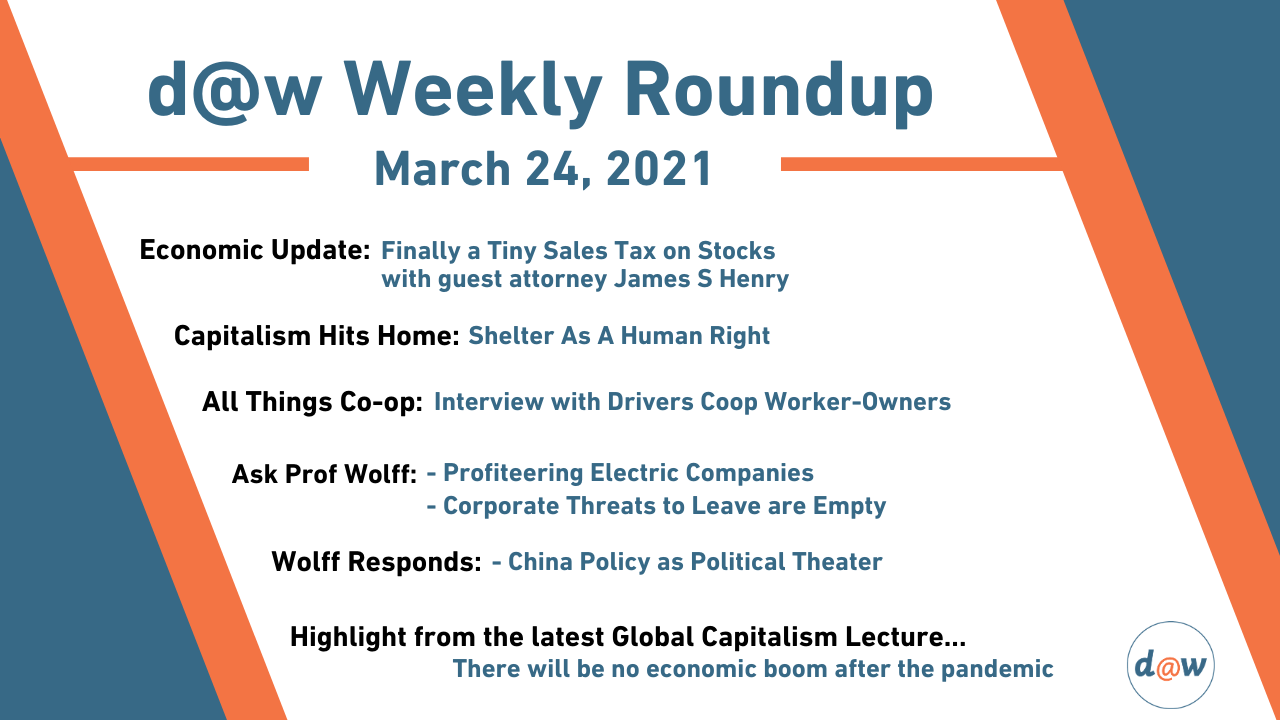 On this week's show, Prof. Wolff talks about the taxing of CEO pay in the US, the immoral and self-defeating vaccine policy, and LeBron James speaking out on social issues. On the second half of the show, Prof Wolff interviews attorney James S Henry on the struggles for a stock transfer tax in New York, the US and globally.

This is part 4 of the 4-part series on capitalist commodification, Fraad and Forlano talk about shelter as a basic human need. 500,000 Americans are homeless, countless others face impossibly high rents.

Fraad: "All humans need shelter. We don't thrive living outside. And what has happened to shelter is a nightmare, particularly in the pandemic... Every single community rural or urban in this country is impacted and each year the shortages get worse more people are homeless the population in the shelters is now 50 percent higher than it was 10 years ago"

Forlano: "Utah lawmakers found out how to end homelessness and then they stopped doing it. Why, in this country, do we run away from ideas like this?"

This is a clip from All Things Co-op in which guests Erik Foreman and David Alexis talk about their exciting new cooperative - Drivers.Coop - in New York City. Driver.coop is a river-owned ride-hailing cooperative in New York City, whose mission is to end exploitative conditions in the for-hire vehicle industry through system change– putting drivers in the driver’s seat of the platform economy.
David: "There's this concept that if you want to get [ahead], you got to pull yourself up by the bootstraps. If you want to do better in life and you're not happy with your job then you're doing something wrong. Or, you gotta start your own business and you have to be just like the capitalist to get ahead. And I think Eric giving us the opportunity as a co-op, being radicalized, and being able to understand that there was a better way, it was really what led me to jump, full hands on deck."

Eric: "The problem that we were trying to solve was how screwed up this industry is, and how bad it is for workers. And we were trying to figure out if we could solve it through worker ownership, which is something drivers are very enthusiastic about. Over 300 drivers expressed interest in the class and that's when I kind of realized this idea has some legs. And basically a group of two dozen drivers came together there and developed plans for: what if we had our own app that would allow drivers to take back the 25% to 40% of their income that's siphoned off by Uber and Lyft? What if we then look for the other things drivers have to pay for you could use cooperative purchasing to reduce...

A patron of Economic Update asks: "I would like to hear your view of community owned coops with regards to utilities. I ask this because I am at the other end of the state proximal to Niagara Falls one of the largest hydropower sources on earth. Our electricity is provided by National Grid an investor owned consortium based in Spain, yet have some of the highest electric bills in the U.S. and no high speed internet.. Point of information National Grid also operates the power in England no thanks to Mrs. Thatcher."

Wolff: “The entire electric utility industry in the US is a scandal and has been so for a long time. The basic issue has to do with the fact that electricity is normally considered a ‘natural monopoly...’ It’s a scandal because when you let a private company run electricity, especially under monopoly conditions, there is a bad tendency for the company to make money by jacking up the rates since where else are we to go… And then the problem is that there is an incentive for those that are regulated to capture the regulators, to find ways to influence them, to persuade them, to bribe them to get the regulation that they wish. So we end up with a system that’s ‘partly’ regulated.”

A patron of Economic Update asks: "What economic consequences would result if, in response to such demands, these companies were told to turn off the lights and close their doors behind them at the start of their irrevocable ejection from the USA and its markets? Since they are paying little, if any taxes, would the Nation be better off without them?"

Wolff: "The United States has been an endless series of accommodations, supports of all kinds, for the businesses that grew big and strong here, in large part because of those supports. If they're going to leave now after 10, 20, 40, 60, 100 years of support, they've got some paying back to do.”

There will be no economic boom after the pandemic

This is a clip from the March 2021 Global Capitalism lecture by Richard D. Wolff in which Prof Wolff responds to the various predictions that there will be an economic boom after the pandemic, much like there was a boom following the Great Depression and World War II. He analyses the key differences between then and now that make this an inaccurate historical comparison: duration of the preceding crisis, the current levels of American debt, and the fact that America is no longer alone at the top of the global economic economy.

Wolff: "There are people who look at all of this horror and say well we'll be out of the woods soon… I don't think a boom is coming... The talk about a boom when this pandemic is behind us is just that: lots of talk by people who are claiming some historical parallel that is not there..."

In this Wolff Responds, Prof. Wolff comments on Biden's aggressive vitriol of China and Russia. He argues that the US foreign policy is more indicative of problems within the US than what is happening in those countries. The Biden assault on the Chinese government has the same distracting purpose that Trump's did. It forces people to look outside of the US and blame the destruction of the American middle class and the American dream on something other than the true culprit, the capitalist system.

Wolff: “We are a much more unequal country today than we were 50 years ago and that destruction of the American dream, destruction of the American middle class, that our two-party monopoly has presided over all these years that needs to be distracted from especially now that we have a pandemic threatening our health on top of an economic system threatening our economic future and so yes we will once again see the theatrics of a foreign policy driven by the need to distract people from what is being done to them by capitalism here at home.”